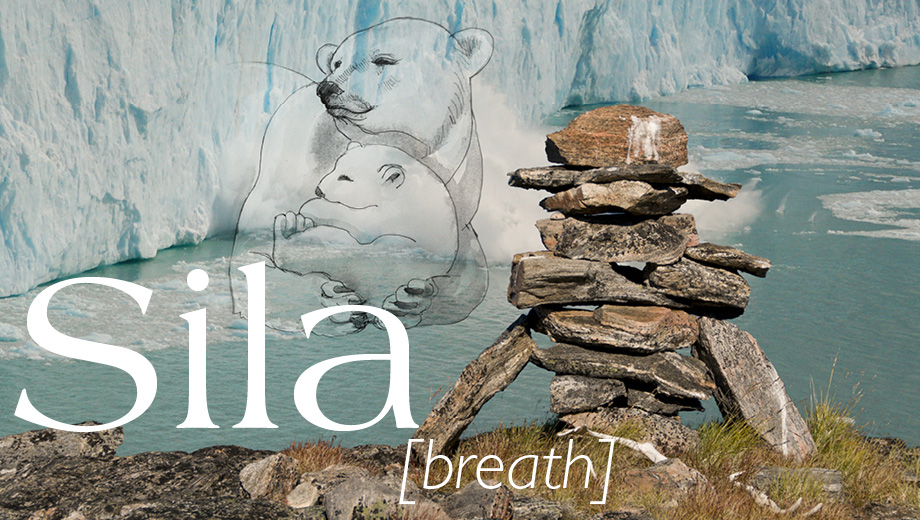 Sila Will Make You Hold Your Breath

The moment I walked into the Central Square Theater, I knew that I was in for a special treat. The upstage walls of the incredibly versatile black box were all delicately draped with white and pale blue fabrics, lit and gently swaying in the wind and instantly transported me to the northern territories of Canada, where ice and snow are all that you can see for miles.

This was the perfect setting for Chantal Bilodeau’s new play, Sila, which is produced by The Underground Railway Theater at the Central Square Theater. To explain it, however, is difficult. Part “social activist play,” part “cultural storytelling” and part “spoken word piece,” Sila intertwines the lives and life cycles of key players in the Arctic environment, including: a single mother and Inuit native; a scientist working to gather data on the erosion of the Arctic landscape; a naval officer trying to build a deep sea port in his final days on duty; and a polar bear and her cub.

Spoken in English, Innuktitut, and French, Bilodeau’s script masterfully weaves these lives and stories together, and the plays brings to light their parallel courses, linking them all to the Arctic environment and commenting on the delicate ecology of that landscape.

Megan Sandberg-Zakian’s direction feels like poetry, carefully paced and staged with a sharp eye. Zakian employs not only her actors, but her designers as well, tasking bodies, lighting, shadows and life-size puppets to tell her tale. Yes, puppets.

When the polar bears first appeared through the upstage opening between the flowing fabric, you could hear a few of the audience members gasp as these massive and well-detailed puppets made their way downstage. Driven by several actors and voiced by the incredibly talented Sorphorl Ngin, the mother bear soon becomes the heart and soul of the show as she attempts to train her cub, handled by the equally impressive Theresa Nguyen, whose youth and innocence provide the perfect counterpoint to the danger of the Arctic.

Ngin doesn’t just voice the puppet. Sandberg-Zakian smartly employs her as the lead, Veronica, whose life takes a dramatic turn when her son takes his own life. Ngin is a powerhouse, leaping from Inuit to English to several scenes in which she remains silent but portrays just about every shade of pain and anguish imaginable. Her doubling only further emphasizes just how intimate the relationship between the Inuit people and their environment is, as the parallels between the characters’ storylines develop.

Ngin’s performance is matched by Nael Nacer who plays Jean, a climatologist seeking to gather information on the changing landscape. It is revealed that, after many years and extensive research into the environment, he has neglected to learn anything about its people or culture. Nacer’s journey is palpable, as he does some lingual acrobatics of his own, jumping from English to French seamlessly. His turning point, however, comes during an expedition, when an accident brings him face to face to Nuliajuk, Inuit goddess of the sea. Nuliajuk is angry with Nacer, but lets him live. Jean then begins to realize just how insensitive to the local culture and ecology he has been as he comes to understand the meaning of the mythological tale.  The encounter is told beautifully through the use of shadow puppets; figures dancing gracefully across the delicately draped fabric in the background.

The drawback of this production comes in the form of some of the supporting characters, mainly Leanna (Reneltta Arluk), a political activist whose passion for her culture and environment blinds her to the erosion of her own relationship with her daughter (Ngin). It’s a tough role to play, but ultimately, Arluk fails to gain the support of the audience and feels more like a preachy, self-absorbed politician than a passionate cultural advocate.

Sila is important theatre, not only because it tackles issues of climate change and touches on cultural appropriation and ownership, but also because it pushes the bounds of what theatre is and looks like. It is an entrancing theatrical experience, storytelling at its best.