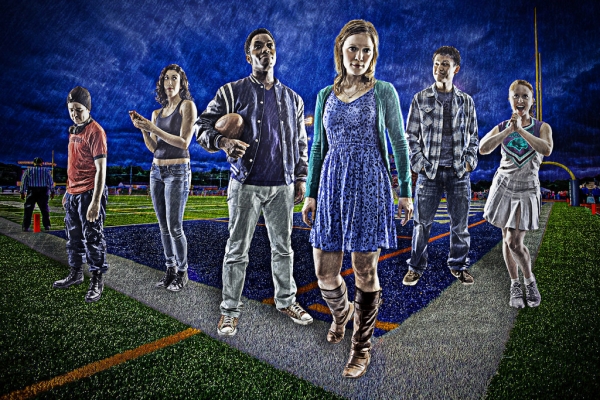 Jane the Plain: What’s In a Name?

You remember high school, yes? Those four uncomfortable years when you were likely pigeonholed into some quickly identifiable, grossly inaccurate categorization of who you are as a human being. Gay. Fat. Jock. Nerd. Emo. Ah, memories. Flux Theatre Ensemble is betting that you hold just those memories and wants to challenge the commonly held perceptions attached to the labels we are all too familiar with in their new show Jane the Plain, written by August Schulenburg. However, Jane the Plain is not a typical high school show and, while the themes get a tad confused, Jane the Plain was a surprising treat of a show thanks in large part to its gifted ensemble.

Jane the Plain starts off as a cautionary high school tale, with dumb jock Scotty the Hotty (portrayed by Chinaza Uche) having a one night stand with Jane the Plain (Alisha Spielmann). Jane, being an irresponsible teenager in the age of the smart phone, proceeds to send Scotty a sext message and Scotty, being an irresponsible teenager in the age of the smart phone, sends it along to half the school, much to Jane’s understandable horror. That is when Jane the Plain ceases to resemble a typical high school story. After confronting Scotty about his texting habits, Jane runs into the pouring rain and straight into a beautiful glowing girl who turns into a pulsar. Jane is inexplicably transformed by this experience and soon becomes the gorgeous envy of the entire student body, much to the chagrin of Betty the Pretty (Becky Byers) who has a crush on Scotty. Betty takes it upon herself to crush Jane’s social status (and her leg) and concocts a plan, with the help of Leonard the Awkward (Isaiah Tanenbaum) who has been crushing on Jane, to spread a rumor that Jane is a lesbian. Lexi the Sexy (Sol Crespo) is intrigued by this rumor as she has been hiding her sexual identity, and she develops a crush on Jane. This twisted teenage tale almost comes to a head at the school prom, à la Carrie, but it is the football field finale, featuring an epic battle between “beauty” and “death,” that makes this play intriguing.

There is a lot going on in this play, and not every message condensed into the script is fully developed. Themes built upon the concept of self-acceptance and self-identity are quite clear. Ultimately, a person is not confined to and defined by a single character trait. Jane the Plain is not plain at all, Scotty is more than simply a jock, Betty is quite insecure, Lexi despises her outward façade, Leonard’s intelligence and unease with conformity is labeled “awkward,” and Leeson the Decent (Chester Poon) does what he can to fit in. Other themes are harder to discern. Specifically, while I can appreciate the idea of beauty battling death on a never-ending cycle, the juxtaposition of “beauty” and “death” was too unrefined to follow and the topic warranted more attention. For example, Scotty mentions a mirror man early in the show and appears to fear the mirror man (who we later learn is the bearer of death). However, it is unclear why the mirror man is important until far too late in the script, making the mirror man storyline seem like an afterthought.

The cast of Jane the Plain is among the best ensembles that I have seen in awhile.  Every actor embraced his or her namesake with enthusiasm but not in an overly predictable way. For example, Tanenbaum’s Leonard the Awkward is not simply a kid who plays Magic and makes Greek mythology references (although he does both) – Tanenbaum is a fighter with an attitude and does not behave like a stereotypical pushover lost in a school of “others.” Did I mention that the cast is hilarious? They are. All of them. Chinaza Uche and Becky Byers have a particularly strong grasp of comedic timing. Uche’s success stems from his clueless but well-intentioned statements delivered with a rushed sense of honesty, as if Scotty believes the absolute truth of every absurd statement that comes out of his mouth. Watching Byers was like watching a cross between Regina George in Mean Girls and Cheri Oteri as the Spartan Cheerleader on Saturday Night Live. It was an acting choice that worked incredibly well.

With respect to the creative team, Director Kelly O’Donnell’s staging reflects a well-crafted vision of how best to use a small space and focus attention on the actors, rather than overloading the space with props and unnecessary clutter. The choreography, which I can only assume was O’Donnell’s creation as well, is both striking and fluid. Furthermore, Will Lowry’s set is reminiscent of a high school but is also delightfully stark and malleable.

Filled with serious themes presented with a touch of heart and a whole lot of humor, Jane the Plain successfully manages to avoid the label of being “just another high school play.” Despite a few plot missteps, each member of the spirited ensemble of Jane the Plain delivers a delightful performance worth catching at the 4th Street Theatre.