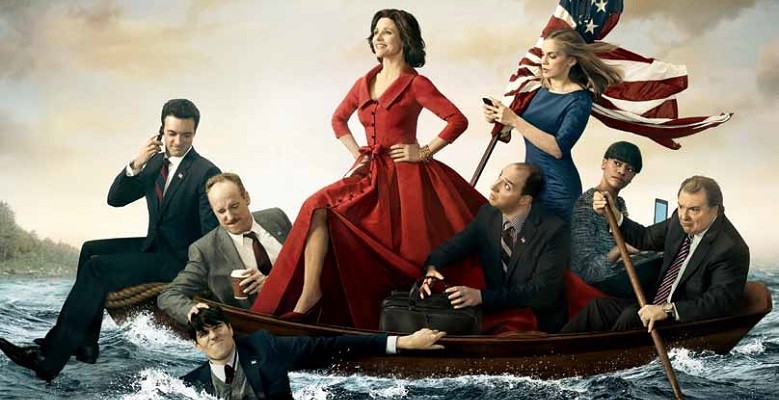 In the second instalment of a just now conceived three-part examination of HBO Sunday – the most juggernaut line-up since Must-See-TV NBC Thursday contained Friends, Seinfeld and George Clooney ER – allow me to bite off a little more than I should chew. During the hour and a half that precedes Silicon Valley, which continues to labor in the wake of Peter Gregory’s untimely disappearance, exists two worlds unlike any other pairing of lead-in and stay-tuned-for that’s ever existed. I mean, of course, Game of Thrones (at 8pm) and Veep (at 9pm).

It’s the kind of scheduling all industry experts should stop and appreciate: simplistically pragmatic. Honestly, who cares how different the tones and genres of these two shows happen to be, since they are quite clearly the pillars of HBO television at the moment and should therefore be stuck together for maximum effect.

The eyes will come, they said, and that’s all that truly matters. Put the bloodiest and boobiest in front because it’s most popular, children’s senses be damned.

Pragmatism aside, there remains some thematic ports that pull these two distinct shows into its must-watch molecule. The most striking, I’ve found, resides within the prognostication of society led by powerful women. While satire and farce may be the crux of Veep’s modern tale of a woman attempting to assert her right to the throne of these United States, and Game of Thrones may concern itself with action and drama in another’s battle for presidency over seven kingdoms, both touch on similar quandaries that mighty women might face.

Although I do not consider myself an educated feminist, I have dated a few and believe that sufficient enough to write this term paper of analysis. I am an expert in secondhand ramblings on patriarchal glass ceiling, after all.

The shared plights of Dany and Selena have never been so clear as they were this past week when both women smacked headfirst into their heterosexual carnality. At a whim, these two Alpha-females asserted their dominance and grabbed hold of some fit and convenient cock. It’s a humorous little note that conveniency seems to be the central prerequisite to powerful people affairs, regardless of gender. For every intern Lewinsky, there’s a personal trainer Ray or a sellsword captain Daario. We’ve all got needs, man!

The treatment of how Dany and Selena dealt with their sexual urges, however, is quite a study in contrast. The expected demeanors of these two women are indeed flipped on their proverbial heads, and I say that in the cleanest sense possible. The younger and less experienced Dany somehow presents as an aged vixen with a master’s assurance in her own want. When she finds the sexy cutthroat Daario waiting in her chambers with wild flowers, she is stern with him, never truly changing her tone even as she shifts from denouncement to flirtation.

I pour wine for my own lips; you strip when I demand it; I don’t get naked on screen any longer. Which reminds me. A quick aside: for all the internet hubbub made about actress Emelia Clark’s rumored insistence that she no longer appear in the nude, the effect is actually very sensible. It’s fitting in terms of her character arc that she be transformed from the objectified to the objectifier. Now, I wouldn’t say I’m against a nude Emlia Clarke, I’m just saying that I respect the creative decision, regardless of who made it.

In general, apart from her lounging narrative in Qarth during season two, I’ve always enjoyed the trips out to Essos to check in with the Khaleesi. It’s been fun to see her taking the stewardship of Slaver Bay as some kind of throne with training wheels. In this regard, Dany flashes Tracy Flick’s shaky balance of a student’s willingness to learn and a monarch’s arrogance. The two iconic female characters also share a sensual maturity beyond their years. For crying out loud, just look at how Tracy seduced poor Mr. Novotny! Perpetrators of Statutory rape have never looked so pathetic.

For her own salacious affair, Dany takes her time in the courtship with Daario, betraying only the faintest of interest during his many moments of wiener-wagging bravado. By the time he climbs up her castle wall and into her sexy stone quarters, Dany has the man Pavlovian, drooling at her feet. The girl is learning how to be in charge in the throne room and in the bedroom. Take note all you false ass kings across the sea, because Khaleesi’s got the jump on this queening thing.

Meanwhile, across the hour, after nine, we find Selena in the midst of her own workplace affair, only it’s with her personal trainer Ray, played admirably by the talented and recently canceled Christopher Meloni. Since Julia Louis-Dreyfus hit the town in character with actual vice-president Joe Biden during the latest White House Correspondents Dinner, Selena Meyer has ascended to a higher plain of cultural significance even as Veep’s third season marks an ominous low point in the series; its legs already appear to be breaking down.

The manner with which the show has gone off the rails and abandoned all its characters’ redeeming qualities is quite something to behold. Perhaps it’s all a statement on how D.C. spoils the people that come to serve, but I doubt it. The narrative this season is simply too sloppy to possibly be intentional. I mean, for the love of God, what kind of cartoonish creature has Jonah Ryan become. The most off-the-walls characters are usually the first to turn self-parody and consume themselves, but lordy has Jonah become an uncomfortable presence. You can practically hear the contortions the writers must make to insert Jonah somehow into every episode. It would have been nice if they had pulled a page from Game of Thrones and tried ignoring characters for episodes at a time, or simply killing him off. But, I seriously digress.

Selena’s sexual liaison is my focus at hand, and in comparison with Dany’s dominatrix manner, it’s kind of remarkable. This powerful vice-president, striding haphazardly toward possible presidential election is turned schoolgirl during her affair with a buff buffoon. Selena cannot hide the affair to save her life as her entire team easily read the telltale signs of Selena’s sudden giddiness. She allows this idiot trainer to spread his ignorance throughout the campaign all because she is a slave to her own desires. It’s a troubling sight to behold for a presidential candidate, even a fake one. Not the extramarital affair, but the inability to separate sex from profession.

Overall, It’s become an obnoxious trait for Selena that she is so easily turned on. It was one thing when her ex-husband had a way of getting her goat then getting her goat off, but the whole Ray thing has been shockingly cheap. Once again, perhaps this is just the satirical point the writer’s are trying to make, that all politicians are narcissistic horndogs regardless of sex. I just found that this particular thematic illustration was also quite often uneven and thus rang hollow. Instead of the British reporters being interested in the affair itself, they latch onto Ray’s fitness literature that equates fat people to evil. I doubt the affair details would ever have been swept under the lede rug so flippantly if it had been true.

In the end, Selena sends Ray packing and reasserts her dominance. She further gets her groove back by firing her campaign manager who also happened to be the one pimping her out to Ray in the first place. I am certainly ready to move past this and get back to the soothing turmoil intrinsic to her relationship with ex-husband Andrew.

As Veep and Game of Thrones are now winding down their seasons, preparing for hibernation until the return of Must-see-Sunday, it would appear the two shows mirror the sex lives of their would-be queens: one surefooted, coy and conservative, the other madcap and losing contact with reality. I’m not here to claim this means anything for the future of female political power, but well, is Hillary going to run in 2016? Do you think we’ll know when these shows return? What if Veep doesn’t come back? Will that ruin her chances?