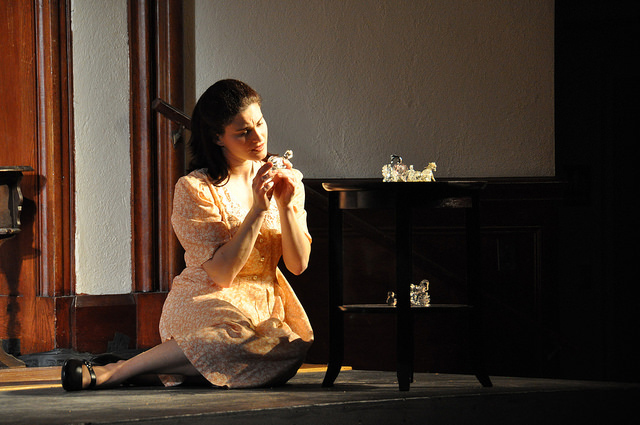 I think it must be hard to have the guts to choose to produce The Glass Menagerie, given the recent success of American Repertory Theatre’s production* and that that production just garnered multiple Tony Award nominations. Personally, I would think that a small community theatre might want to steer entirely clear of it. Local audiences can’t help but compare the two productions, and yet, The Winchester Players took that brave leap with their current production. I wish that I could say that it was a worthwhile leap, but the production struggled to achieve what it could.

For starters, Ben Delatizky’s direction was confusing to me. He made a decent attempt at explaining his vision in his director’s statement, which sought to explore the idea of memory, noting that memory is nothing, if not, inaccurate. He chose, therefore, to omit certain props and scenic elements throughout the course of the show and to have the actors mime the missing items. I actually enjoyed this mechanism as it translated in the scenic design. The free-floating crown molding and door jams defined the location well and made it feel slightly ethereal and abstract. It was a simple, yet graphically powerful design choice, which fell right with the vision for the show.

The rest of it, however, I just couldn’t buy into. Delatizky even goes so far as to note that his vision may come off as “inconsistent.” He’s right, it does. For me, miming never works except in very high-concept cases. In this case, however, the doorknob was always at a different height, and the door always slightly askew when an actor opened it. There was no apparent rhyme or reason as to which props were physically present and which ones weren’t. Thankfully, the actual glass menagerie was present, otherwise, I may have been completely confused.

The vision wasn’t wholly unsupported. In addition to the smart and simple set, the sound design often served as a nice underscoring or accompaniment to moments of memory or wanderlust. I felt they could have done much more with the lighting design to further support these moments, but it seemed as though they may have been working with limited resources in that department.

The technical elements weren’t the only disappointing part of this production; the performers only achieved momentary glimpses of strong performances.

I’ll start with the good. Jason Hair-Wynn plays an acceptable Tom and does his job in terms of moving the story along and introducing the characters. He is charismatic in his opening monologue and delivers one of the best moments of the play in his closing speech. Everything in between is lackluster and off-the-mark. I half-expected him to break out into song and dance when he first argues with his mother because he employed a broad “musical theatre” acting style.

The theatrics don’t end there. Kathy Cahill Wackowski’s tour as Amanda was a bit of a let-down for me. She, too, is a talented musical theatre performer and it shows here, even when it shouldn’t. I enjoyed her reminiscing about her seventeen gentleman callers, but I never felt any true sense of urgency in her performance even when she was trying hard to find a suitable caller for her daughter (which may have been her very last hope for a decent life, in those times.) All of the acting seemed so broad and over-the-top that I almost wanted a chorus of dancing boys to join in the fun and justify some of these choices.

Even if I couldn’t fully support their acting choices, I was pleased that Wackowski and Hair-Wynn were at least making some choices, unlike their colleagues Kristie Norris and Paul DeCamp as Laura and Jim, respecitvely. Norris was sadly unforgettable, and DeCamp, clearly new to the stage judging by both his performance and biography, drove-over any nuance that he may have found in his character and plowed through every basic acting beat and moment.

Hair-Wynn and Wackowski also had a great sense of rhythm in their scenes together, and they did a nice job of trading energy back and forth to keep their scenes moving forward. Though the entire play lasted just about 3 hours (which was far too long, in my opinion), their exchanges were at least alive with a good chemistry.

The thing with Tennessee Williams’ script is that it needs a certain rhythm to survive. Just like the small glass ornaments with which Laura is so enamored, if you mishandle or over-treat it, it could very easily just fall apart. An inconsistent vision, under supported technical elements and off the mark acting choices caused this production to crack and, ultimately, break.

*Note – I actually didn’t see the A.R.T. production, so this review is in no way a direct comparison, as that would have been entirely unfair.