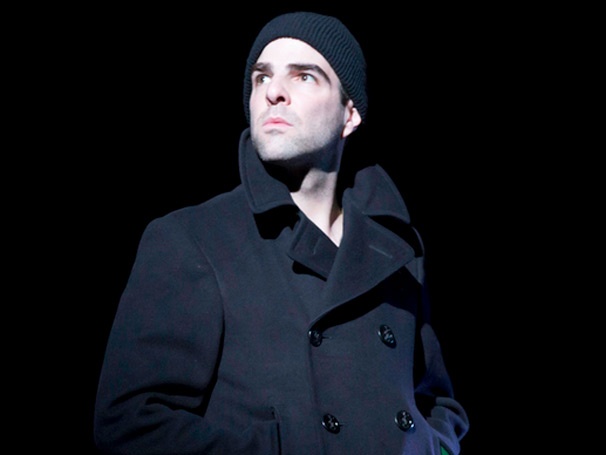 We all have them. Those books or plays we battled in high school and despised for a plethora of reasons, some legitimate (with all due respect William Faulkner, punctuation is a useful writing tool that you should consider wielding) and some less so (dear Holden Caulfield, please stop being emo, thanks). Do not get me wrong. I genuinely love reading. But, there is one author who just pissed me off as a teenager. A man for whom my disdain was so great that any mention of him inevitably led to an emotional outburst on my part. Unfortunately, the author in question has won two Pulitzer Prizes and the Presidential Medal of Freedom, and he is considered one of the greatest American playwrights of all time.

Foe, thy name is Tennessee Williams.

It was with immense trepidation that I entered the Booth Theatre on opening weekend of The American Repertory Theatre’s critically acclaimed production of The Glass Menagerie. Confession time: I left the theatre with a little less hatred in my heart for Mr. Williams. Just a little.

There are many things I can appreciate about Williams’ plays especially given the historical backdrop from which they sprung. However, there is a staple of Tennessee Williams’ work that drives me nuts and overrides that appreciation – the women. William’s female characters are often reduced to two adjectives: vulnerable and frail. They are often distractingly helpless and always seem to depend on the kindness of strangers (see what I did there?). Those women who appear to possess an ounce of inner strength only wear that guise to cover some deeply rooted insecurity that arose from being wronged by a man. The Glass Menagerie is the poster-child for my hatred of all things Tennessee Williams.

The Glass Menagerie is a story, inspired by Williams’ own life, in which the narrator Tom (portrayed by Zachary Quinto) remembers a time when he lived with his controlling, former Southern Belle of a mother Amanda (Cherry Jones) and his fragile and physically handicapped sister Laura (Celia Keenan-Bolger). Tom’s father is noticeably absent and all that remains of him is a picture on the wall. He was a telephone salesman who fell in love with long distance, ran off and never returned. Stemming from her spousal abandonment, Amanda is obsessed with the idea that her daughter will become an old maid. Laura is overwhelmingly shy and insecure, so much so that she becomes physically ill in social situations. Amanda convinces Tom, who escapes the household nightly to go to the movies and desires to become a writer, to bring home a Gentleman Caller (Brian J. Smith) from work to meet Laura. Predictably, that exercise is less than successful despite the friendly relationship that blossoms between the Gentleman Caller and Laura, and Tom leaves his family behind shortly thereafter. Oh yes, and Laura has a symbolic collection of fragile glass animals that she obsesses over, including a prized unicorn whose horn breaks off at a key point of self-realization for Laura, leaving it just like all of the other horses.

I have seen The Glass Menagerie performed many times before, and never have I felt anything but loathing for it . . . until now. The words were the same, and, yet, I felt that the staging, the lighting, and the acting brought a truly new dimension and depth to the play. From the moment that Tom pulled his sister Laura from his memory and [literally] onto the stage, I was entranced. Throughout the play, the director, John Tiffany, and the lighting designer, Natasha Katz, effectively secluded characters in their own thoughts and created a dazzling array of glittering glass without filling the stage with an actual menagerie of glass animals.

In addition to the successful artistic design, this ensemble is perfectly cast. Brian J. Smith is charming, funny, motivated and believable as the high school all-star who failed to fulfill his potential. Celia Keenan-Bolger successfully conveys Laura’s many insecurities and is appropriately fragile (sigh) but in several key moments, she adopts a spark. There is life there. Passion. A woman who can make something of her life and who is anything but made of glass. Keenan-Bolger is the first actress I have seen in this role who made me care about Laura. However, Keenan-Bolger was not the only woman on stage who caught my eye. Cherry Jones is a gifted actress. I have seen Amanda portrayed as abusive, delusional, deeply resentful of her life choices, and as a woman who all but gave up on life with the departure of her husband. Jones’ Amanda is none of these. She is overbearing and spends a great deal of time reliving her glory days as a desirable young woman, yes, but she is also funny, independent, resourceful and self-sufficient (whether she recognizes that fact or not). Jones fills the stage with her presence and one cannot help but feel for Tom and Laura as they struggle to live in a household dominated by Amanda’s personality.

Which brings me to my epiphany of the show. Zachary Quinto has always struck me as a good actor. My college roommates watched Heroes, and, in the few episodes that I saw, Quinto was enjoyable as the villainous Sylar. In the new Star Trek movies, Quinto’s portrayal of Spock is appropriately reflective of, and yet distinctive from, Leonard Nimoy’s Spock. His intriguing and creepy performances in the first two seasons of American Horror Story were notable. Despite these many observations, I never gave Quinto much consideration. As I watched Quinto on stage, I noted the complexities of the character he developed – from Tom’s melancholy first appearance, to his internal struggles with a fight or flight spirit developed from years of living in a troubled household, to his utter loathing for the father who abandoned his family while simultaneously wanting nothing more than to follow in his footsteps, to OH MY GOD – I am a Zachary Quinto fan! Quinto is such a thoughtful and understated actor that his work outshines him as an individual. With great respect to Mr. Quinto, I mean that in the best possible way.

The Glass Menagerie is being performed at the Booth Theatre until February 23.