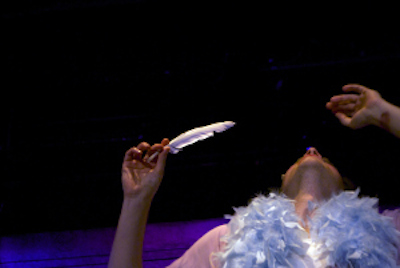 Angels in America: Part 1 – Millennium Approaches is an ambitious piece of theatre. The play demands outstanding performers, technical innovation and precision, and a strong directorial concept and eye for detail. The Umbrella (formerly the Emerson Umbrella) in Concord, Massachusetts astounds and surprises with its professional delivery of Tony Kushner’s epic play. This performance marks the first of a two-part series, the second play being performed in the Fall 2014 with the cast reprising their roles to finish the saga. I can only say that I cannot wait to see this rarely-performed, beautiful story continuing with the same heart-breaking emotion, truthful portrayals, and searching truth found in Part 1.

I can’t describe Angels in America; subtitled as “A Gay Fantasia on National Themes,” the play tackles everything in its themes and dialogue. Set in New York City in the mid-1980s, Louis Ironson (played with excellent relatable neuroticism by Kendall Hodder) learns of his lover, Prior Walter (played with emotional resonance and versatility by Peyton Pugmire), has AIDS, an illness which progresses throughout the play and transforms their relationship to devastating effect. Their relationship rings truthful, an uneasy harmony, which stands on the precipice of destruction. Hodder and Pugmire never force the emotion or connection, but play the right blend of uncomfortable longing to connect and understand in the face of unimaginable tragedy. Their emotional turmoil makes the play worth seeing.

Concurrently, the closeted homosexual Mormon and Republican law clerk Joe Pitt (played with stiff and affected performance by Kevin Tobias Brown) struggles under his own demons, namely, his conflicted religion, politics, and sexuality, under the mentorship of McCarthyist lawyer Roy Cohn (played with pitch perfect fervor by David Berti), a man who also suffers from AIDS, despite his closeted and conservative lifestyle. Joe is under additional stress from his Valium-addicted, agoraphobic and secluded wife, Harper Pitt (played with sincerity and relatable vigor by Jennifer Shea). Brown delivers one of the weakest performances of the tight ensemble, rarely connecting with his scene partners, despite the ample assistance from Berti and Shea’s outstanding performances. Despite Brown’s inconsistencies, Berti and Shea may be the stand-out performers in this exceptional cast. Berti’s opening scene fires with energy and excitement of the politics of Washington; Shea’s subtle weakness and vulnerability pulse with the longing to make sense of a world and life that she no longer understands, and which no longer understands her. Her voice is musical, her movements slight and punctuated with the heaviness of her illness. In a word, she is a delight on-stage, allowing the audience to see the human being underneath the illness, something that I have never seen in Harper.

Director Nancy Curran Willis is no stranger to Boston community and professional theatre. Boasting an impressive resume, her dedicated work as director and theatre coach shines through in her cast’s soulful delivery of this difficult work. Her minimalist set designed by our own Brian Boruta allows the play’s action to shift seamlessly among the many locations in New York City, from apartment to apartment to icy cold tundra to the cold doctor’s examination room. Rick Shamel’s lighting design work in excellent tandem with Boruta’s scenic design to accent each scene’s emotional tremor. This play is rarely performed not only for its difficult material for actors and directors, but also because the play demands technical expertise, far surpassing the budgetary capabilities of most non-professional theatres. The Umbrella rises to the challenge under Curran Willis’ innovative directing and leadership. While some of the moments do not offer some of the full resonance that can be accomplished with a more substantial budget, the truthfulness and heart of the piece resonates where money fails.

The supporting cast of Liz Robbins (Hannah Pitt, among others, including an exceptional Rabbi), Damon Singeltary (a sassy but restrained Belize), and Sharon Mason (the deus ex machina Angel) shine in their respective roles. If I had a say, I would replace Brown for the more difficult Part 2 in the fall, but, alas, the Umbrella’s decision to use the same cast is an impressive undertaking to open their next season. What can only be described as a journey, Angels in America: Part 1 is a poetic and theatrical dialogue which impresses beyond the sum of its parts, provoking insightful discussion about its many themes and the possibilities of theatre, especially within the Greater Boston theatre community.

I, for one, can’t wait to continue this dialogue and discussion in the fall for Angels in America: Part 2 – Perestroika, an even more compelling and engrossing tale of epic proportions. The beauty of Kushner’s work is that each of the parts stands as fully developed piece on its own merits; the joy is, of course, seeing both parts as a connected work of theatrical brilliance. Don’t miss it at The Umbrella, 40 Stow Street, Concord, MA, playing October 3 through 19, 2014. More information forthcoming on their website.

Additionally, for those patrons who need a refresher, the Umbrella is proud to present a staged reading of Angels in America: Part 1 on September 12 and 13, 2014, in preparation for Part 2, again with the same cast. Anyone who missed the stunning work this spring should be first in line to catch this masterpiece before it’s gone forever.