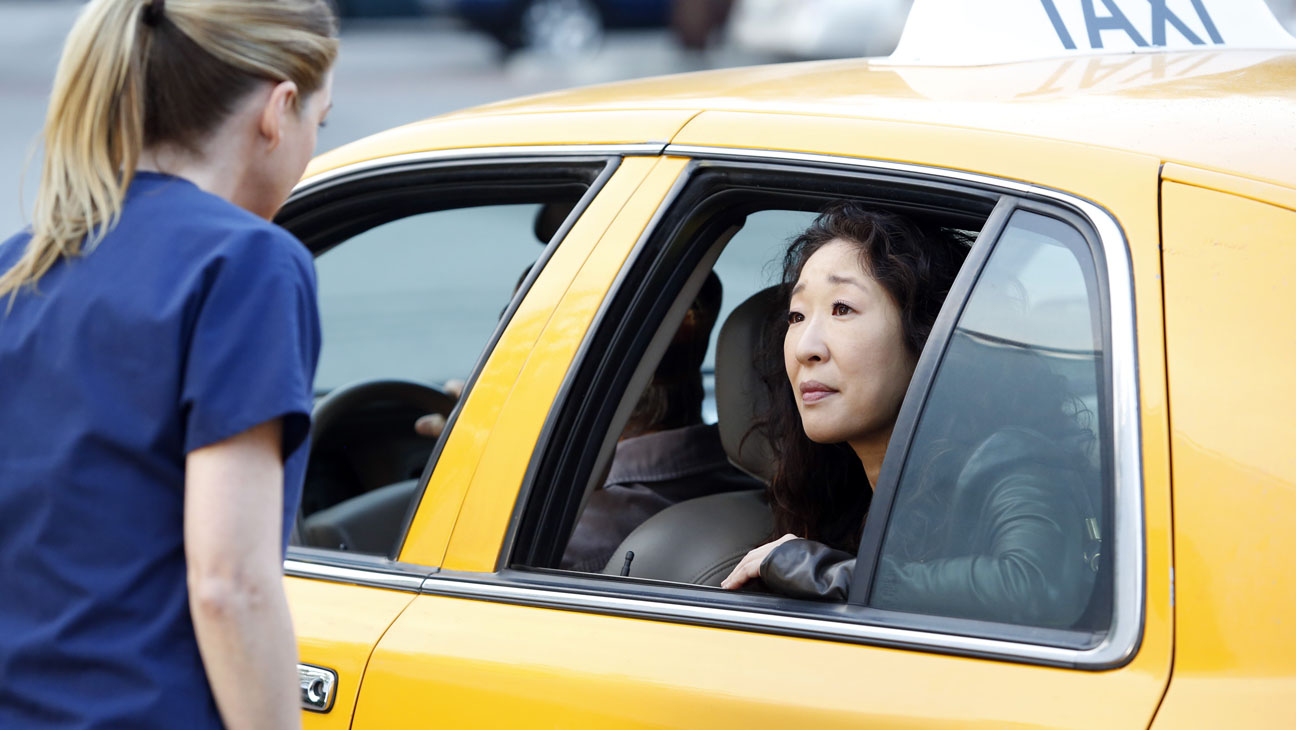 For weeks (many weeks) leading up to last night’s season 10 finale of Grey’s Anatomy, the ABC promo department has been drilling it into our brains: “it’s Grey’s Anatomy, Farewell to Cristina!!!!!!!!!”. This was an important one- the first original intern to leave since Izzie (season 6), and the departure of Sandra Oh who was once considered the show’s biggest star- but one might have thought Michael J Fox was leaving Spin City again for all the fanfare ABC threw towards this episode. I understand wanting to promote the end of Oh’s run but half the population doesn’t even know this show is still on the air; anyone who was going to care that Cristina was leaving already had their PVR set. I mean, surrounding the title with screenshots of Cristina throughout the years? Really? To say nothing of the awkward spin this all puts on the comparatively uncelebrated departures of the many other important people who’ve left the show before Oh. Cristina was key to Grey’s Anatomy‘s success for many seasons (she was certainly the reason I tuned in in the first place) but it’s been years since she’s really been the Cristina we first loved. Long gone (at least until their triumphant return in last night’s finale) were the dance parties and self-awarely egotistical snark, replaced by repetitive romantic brooding and unrealistic fights with her “person”. Love her though I once did, I was more than ready to see Cristina go, and with ABC reminding me with obnoxious frequency that this was a Very Important Departure, the only question that remained was how the writers would handle her sendoff. *spoilers ahead, I guess*

I was all set to feel absolutely nothing. I was more than prepared for Grey’s sans Yang and any lingering nostalgic notes of sadness had been wrestled into nothingness by the ABC promo department (though the nostalgic power of that bridge we haven’t seen in years is not to be underestimated). However, there was about a 15 minute section of last night’s episode that hit me in that finale/character goodbye/series callback sweetspot that always prompts some tears. It happened somewhere just after the midway mark and ended with about 10 minutes to go. Early in the episode I was very frightened that, having set up a clean and happy exit for Cristina in preceding episodes, the restless writer’s room that likes to crash ferry boats might do something really stupid like not only have Cristina die in that mall explosion but have her appear at the hospital only to have said appearances turn out to be memories or visions shared by the over-worked doctors (a far-fetched suspicion supported by Owen’s fruitless search for her and a deep-seated distrust of the kooky and over-dramatic Grey’s Anatomy writer’s room). I was thankfully wrong. The stupid Grey’s Anatomy kooky writer’s room crap all came at the end of the episode when they started throwing in dumb twists but, for about 15 minutes there somewhere in the middle, it seemed as though Cristina would get a sendoff worthy of old school Cristina- matter of fact, understated, deeper and smarter than all the drama around her.

The episode really started for me when she said goodbye to Derek. It was simple, it was a little bit awkward, it was very unpoetic- they just said “goodbye”- and it perfectly suited the complicated, awkward and unpoetic relationship those two characters shared for 10 seasons as contrasting Meredith satellites. I loved that we didn’t even have to deal with a big goodbye from characters who don’t mean all that much to Yang (sorry, Callie; no love for you, Arizona; Jackson and April, you have your own stuff going on). I love love loved the badly timed wordlessness of the Owen scene, the welcome continuance of the engaging Ross/Yang working relationship (even if it’s offscreen and means I won’t get any more Smash Williams in my Greys) and the beautiful frankness of my favourite part of the episode- when Meredith puts Cristina unceremoniously in a cab and declares “what do you need, an ‘I love you’ or something?”. An acknowledgement of what they’re losing is important (they say they’ll talk, but we all know they’ll never get that closeness back) but there was a beautiful ‘you can take my love for granted’ underscore to the way that cab scene played that I felt was the perfect endnote to what was arguably the central relationship of Grey’s Anatomy (sorry, Derek). Of course all of this was horrifically undermined when Cristina reappeared to pull out some old catchphrases (“you’re my person” was a lovely concept but at this point the only Shonda phrase more overused is “gladiators in suits”) and put a neat, overdramatic, unnecessary bow on her departure. I’m not going to pretend I didn’t enjoy seeing the two best friends “dance it out” one last time- who doesn’t love a Grey’s Anatomy dance party?- but I was so happily surprised by the nuanced approach to Cristina’s first round of goodbyes and that curtain call just proved that an old show can’t learn new tricks (like subtlety and restraint).

My day-t0-day enjoyment of Grey’s Anatomy has never depended on maintaining the core of the show. My favourite character is a Mercy West refugee (Jackson) and my second favourite is from the newest crop of interns (Jo). I didn’t cry when George died. But the ABC promo department is right- the departure of Cristina was a big deal for Grey’s Anatomy; she was one of the last remaining icons from when it was the biggest show in the world (ask someone who’s never seen Grey’s Anatomy and you’d likely find that their only frames of reference are the word “McDreamy” and the mental image of Sandra Oh in scrubs). It’s somehow right, then, even if it’s not perfect, to send her off with a few profoundly moving moments of emotional honesty followed by a big speech, a silly gimmick, and a Big Dramatic Twist or two. It is, after all, the Grey’s Anatomy way.

– How obnoxious is Bailey these days! I seem to remember really liking her once upon a time but now it seems that every word out of her mouth bugs me. Maybe it’s the fact that Jason George’s character only exists to be her unrealistically handsome love slave (all he did in the finale was rub her feet!), or maybe it’s that Chandra Wilson’s once vulnerable and fierce performance now mostly consists of emotional outbursts and grand speeches, maybe it’s outlandish stories that don’t even remotely fit the character (spontaneous OCD!). Whatever the cause, Bailey has more than worn out her welcome.

– That Meredith/Derek fight scene was a little much, no? Surely there was a way for Mer to stand up for herself without being quite so combative and blameful about it. That said, the girl has a point. A point that is very much not Derek’s fault, but a point nevertheless.

– Still totally on the Alex/Jo train. She annoyed me at first but has quickly grown into a standout character (loving the Callie/ortho angle on the character) and the first love interest to ever really make sense for and with Alex. Karev’s been in a bit of a story slump for a few years (from about season 3 on he was a saviour of the show, he’s earned some downtime) so a strong love interest has been a blessing for him.

– Kepner/Avery: a truly unexpected twist on the expected wedding interruption, an honest and intriguing exploration of the consequences of their haste, relationship troubles that are relatable and still fresh despite happening in season 10, two characters who have compelling journeys individually and make perfect sense as a pair- most definitely the strongest storyline of the season.

– The departure of the most annoying intern Leah Murphy was somewhat perfect. When she wasn’t used as a plot-pusher, Leah had her moments.

– I can’t pretend I won’t miss Smash. Shane was an interesting intern and Gaius Charles is a kickass actor who should be in everything. They wrote him off in the most appropriate way imaginable (honestly preferable to him staying) but it made me, for one fleeting moment, wish for a spinoff.

– That “new Grey” twist at the end? REALLY?! I mean, COME ON. Idiotic, and bizarrely predictable considering how out of left field it was. Grrrrrrrrrrr.