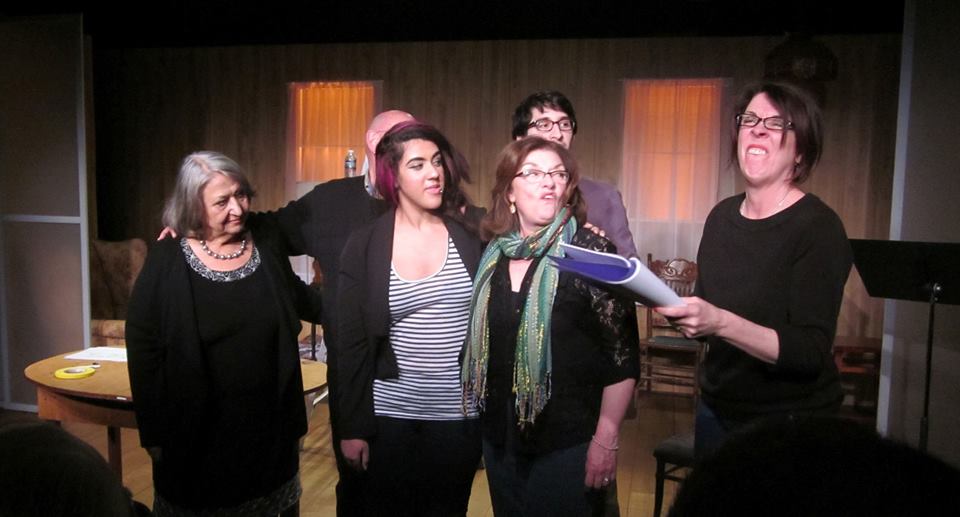 It’s hard to articulate exactly what I saw when I witnessed Maureen Keiller’s remarkable performance in the emerging hit White Rabbit, Red Rabbit by Nassim Soleimanpour. The one-man (or woman) play, produced as limited one-night engagements featuring other popular Boston actors such as Victor Shopov and John Kuntz, is a treat for anyone interested in the powerful quality of seeing art and story be created before your eyes. Zeitgeist Stage Company is known for taking risks, some of them successful and some less so, but always with an eye and ear for shaking up the Boston theatre scene. White Rabbit, Red Rabbit may be their most unique treat to date.

Soleimanpour is an Iranian playwright, billing himself as an “independent multidisciplinary theatre maker.” White Rabbit, Red Rabbit has been performed in more than 20 cities and remarkably in almost 10 languages. The gimmick? The actor has not seen or read the play prior to the opening night (hence, the one-night run for each of the three Zeitgeist actors). With no director and no set, White Rabbit, Red Rabbit is an actor’s dream, and an actor’s nightmare. Maureen Keiller’s performance is, however, an audience’s delight.

It’s difficult to describe the magic of Keiller’s performance without revealing the safely-guarded secrecy of the play. A large part of the joy in watching an actor tackle Soleimanpour’s play is discovering the play along with the actor. The collaboration with each new moment, and the excitement of each new page turn propel the play forward. Each actor’s emphasis in different parts of the play allow the play to stand for something new each time it is performed and featured as a truly new play. Without prior preparation, or director’s coaching, the play can exist for a moment and then it is gone; Keiller has no time to question her actions or choices. Once she has read a line, performed an action, or paused for a moment or glance (gosh, she is stunning in her silence and arched raise of an eyebrow), she can’t take any of it back. There are no mulligans in this game.

The sixty-minute play is not overly political, but instead fuses comedy and drama to create an exploration of something richer and much deeper about the human experience. The play questions our literary and cultural experiences, deeply reaching what it means to feel and to be felt. Keiller’s expressive eyes grow more sharply attuned to the gravity of the situation and the world that she creates, while still sparking with the delight of the wonder and surprise of what is new and exciting. I was excited to see her perform, as she has quickly become one of my favorite Boston actresses for her versatility and willingness to take chances onstage. Her chance in White Rabbit, Red Rabbit are endless, but her most successful chances are the ones where she invites the audience to do the storytelling with her. She relinquishes control over the form and substance of the story and play with grace and kindness, exhibiting one of her most gracious qualities as an actress: her willingness to collaborate and share the space with the fellow actors. Here, the audience becomes her fellow actors and storytellers. The audience’s willingness to join into the action is partly attributable to Keiller’s welcome presence onstage and in our lives in Boston.

It is almost impossible to do a traditional “review” of this compelling and captivating play and performance. I guard the details of the play and Keiller’s performance like a hidden treasure, which I will cherish for years to come. I will smile at the people who joined me for that evening’s packed performance because they too understand the mystery and discovery of participating in White Rabbit, Red Rabbit. My eyes will sparkle when I see Keiller because of the risks that she took to share something secret and profoundly personal in the short play with me. I will remember Soleimanpour fondly for his transcendence beyond the Iranian borders and across the boundaries of language and time to share a journey, a message, a hope for generations to come.

Like the end of this jewel of a play, I hope this non-traditional review sparkles and shines for future audiences to venture to enjoy this treasure. I hope other companies tackle this play with the same truthfulness, energy, and joy as Keiller and Zeitgeist. I hope we never forget the powerful presence of an artful and talented storyteller and the wonder of discovering art in a collective space. I hope we choose to search for White Rabbit, Red Rabbit.