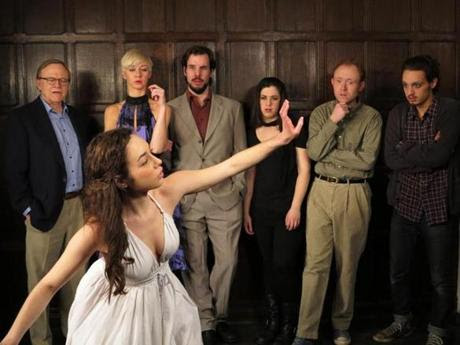 Sort of a Different F***ing Fowl

Stupid F***ing Bird by Aaron Posner offered my first trip to the Apollinaire Theatre Company in Chelsea, Massachusetts. The play is billed as “sort of adapted from Chekhov’s The Seagull,” and, after seeing the play, I sort of agree. Chekhov’s The Seagull tells about the intersection between love and art, new and old forms, the pursuit of happiness and fulfillment, and the endless struggle to find meaning in our lives and work. Following the young writer Konstantin as he seeks to make a name for himself, despite being stuck in the Russian countryside, The Seagull is a dramatic comedy of Russian proportions. The Huntington Theatre Company in Boston is currently producing Chekhov’s play which makes this Stupid F***ing Bird as much a necessary companion piece as a stand-alone wonder. While familiarity with Chekhov’s characters and plots is appreciated (some of the jokes and cruel irony that Posner offers the audience is damn delightful), Stupid F***ing Bird can be enjoyed by all for its pointed fun at the theatre, love, and the many ways that we f*** each other over.

Posner adapts his piece in a clever way. First, we are introduced to our modern-day Konstantin, Con (played with morose charm by Diego Buscaglia), who is struggling to produce his original play for his family and friends, despite disapproval and annoyance of his actress-mother Irina, Emma (played with arched cruelty by Jeanne Frost). Con’s leading lady, Nina, wants nothing more than to perform on a real stage for real people, and her hopes and dreams have never seem so alive yet so unattainable as performed by the fresh-faced Alana Osborn-Lief. And here to help her is the smug but tormented Trigorin, Trig (played with some credibility by Kevin Cirone), the boyfriend of Emma and the turned lover of Nina. Rounding out the cast of characters, the depressed and hopelessly (and hopeful) in love Masha, Mash (played with hilarious deadpan effect by Emily Hecht) and her equally hopelessly (but hopeful again) in love Medvedenko, Dev (played with ready wit and restrained humor by Brooks Reeves) yearn for the lover just outside of their reaches. You see, Dev loves Masha who loves Con who loves Nina who loves Trig, who may be attracted to her but he’s also with Emma who has a weird sexual chemistry with her son Con and only seems to really love herself, and no one loves Dev. Four for you, Emma, and none for Dev. Oh yeah, and there’s Emma’s brother, Sorn (played with the earnest yearning for youth and life by Jack Schultz), who doesn’t really matter but he’s just too damn cute and Posner actually gives him a personality beyond falling asleep in a chair (thanks for improving Chekhov’s source material). Follow all of that? Yeah, me neither.

Just kidding. Directed by Danielle Fauteux Jacques, Stupid F***ing Bird is a remarkably accessible adaptation of Chekhov’s The Seagull which offers just enough plot mixed with the artsy questions that make the production slightly avant-garde . While some elements labored on the pretentious, the actors have such a delightful time in finding their characters’ stories and ambitions that Chekhov’s themes resonate with a new generation of hopefuls. So what if the play is somewhat cheeky and pretentious? You have to go into the performance (much like Chekhov’s original) ready to laugh at the sincerity on-stage as well as at yourself and those around you. Posner’s play, however, hits on some odd points. First, the play opens with the actors stretching and mingling in the open space, breaking any walls between the play’s action and the audience’s comfort (tell them to start the f***ing play), and this theme continues when Buscaglia’s Con takes suggestions from the audience on how to win back Osborn-Lief’s Nina’s affections. This reviewer suggested that Buscaglia cut his hair; it looks as if Buscaglia is caught off-guard (I went opening night so I’m sure that he didn’t know what to expect that he’d hear), and he almost looks like he’d consider it (which would be an interesting twist on the blurred lines between life and art), but, finally, some unimaginative audience member suggests shooting a seagull and the play continues on its course. I wondered if the play would have changed if the actor felt forced to take my suggestion.

The play also offers some frank discussions—almost inner monologues that Chekhov never gave us—from the characters’ most desperate wishes and desires. This not-so-subtle touch is reinforced by the actors’ sincerity in the play’s tragicomedic and melodramatic flourishes, especially by Osborn-Lief and Hecht. Osborn-Lief seems to dance across the space as Nina, floating as if on a dream for much of Act I which makes her inevitable fall that much more painstaking, showing a wonderful range of emotions, especially from such a young and talented performer. She is so relatable and clear in her acting that you can’t help but fall in love with Nina along with Con and Trig, almost drawn to her magnetic youth and enthusiasm. Hecht performs her Masha with unabashed heartbreak and despair with wonderful clashing dissonance and melodic wailing (Masha should always have a guitar). While I found the adults to be a struggle, especially Frost’s emotionally-aloof Emma, they provide the necessary balance to the youngsters’ stories and energy. I’ve almost come to terms that there is no saving Trig for me; Cirone is an outstanding actor who, try as he might, can’t make the suffering artist any more interesting for me. Trig’s monologue still suffers from lack of pacing and focus, and Posner offers no remedy to this incurable ailment to Chekhov’s original.

Which brings me to Con. Buscaglia is talented, but, unlike Con, he knows that he’s talented, often wearing a smug look of accomplishment and charmed appeal while onstage. What make appear to be confidence reads as arrogance at times, and I struggled to find Con’s insecurities behind the actor’s ego. Despite these observations, this casting and these (presumably unintentional) acting choices made for an interesting dynamic for the otherwise stagnant Konstantin/Con. Buscaglia gives us a character with so much hope and raw charisma that we wonder why he can’t succeed and why he could possibly fail. Unintentional or not, his Con is ripe for internal struggle as his inner self-worth is hopelessly inconsistent with his outward (lack of) success. This dichotomy makes the play’s final scenes work in unexpected ways that surpass the source material. Go see him pout and struggle with indecisiveness (a la Hamlet) despite his obvious love for himself, and then make up your own mind.

While the technical elements were minimalist and sparse, they provided the exact right understated effect to focus on the actors and their characters’ stories. With simple (and bare) stage, soft lighting with minimal changes, and (mostly) flattering costuming (except for Con’s odd assortment of get-up), the technical elements supported rather than embellished the play’s action. Jacques does a wonderful job of tying everything together, though the play feels long. The fault lies in the source material which drags in parts and belabors some themes and elements almost ad nauseum. Jacques and her cast burst with humor and excitement, not to mention self-awareness and understanding, to make the play skip along almost without me having to fidget or check my watch (a play running at two-and-a-half hours with two 10-minute intermissions is a bit much).

Like Chekhov, the Apollinaire Theatre Company’s Stupid F***ing Bird may not be everyone’s  bird of choice, but it flies with its own grace and charm that make it a fowl with its own coloring. Resembling its cousin The Seagull, Stupid F***ing Bird isn’t stupid as much as misunderstood and, under Jacques’ careful direction, the cast, especially Osborn-Lief, bring the stories to life for a new generation of stupid f***ing people. Stupid F***ing Bird plays at the Chelsea Theatre Works at 189 Winnisimmet Street in Chelsea, Massachusetts from March 28 – April 26, 2014. More information is available at www.apollinairetheatre.com.