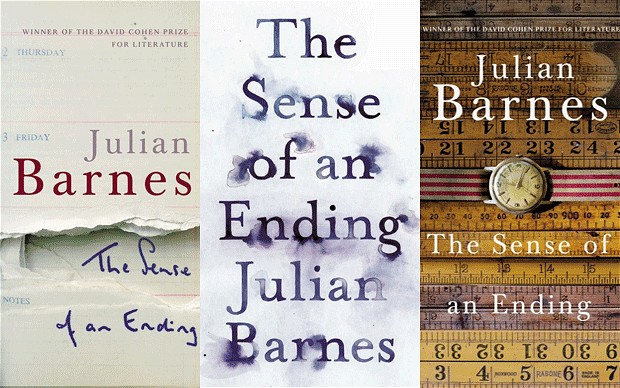 Sense Of An Ending

Julian Barnes’s latest novel, Sense Of An Ending, has been well received. It’s won the 2011 Man Booker prize. It’s well written—which, in this case, actually just means that the prose is restrained, refined, there are occasional changes in rhythm, it’s got a sort of controlled ease, all that soulless jazz. I have liked Julian Barnes before.

Sense of An Ending is about Tony Webster—older, calmer, retired and respectable—recollecting and revising his memories of his young adulthood. He particularly focuses on a friend named Adrian and an ex-girlfriend named Veronica. When Tony receives two documents upon the occasion of Veronica’s mother’s death, Tony finds himself reestablishing connections with Veronica, and wrestling with himself as he begins to remember everything differently.

Sense of An Ending is perfectly competent writing. But since the plot of the novel is a lot of musing on the nature of memory and undiscussed family trauma from the sixties, it’s not particularly compelling (we’ve talked about how I’m not big into quiet domestic dramas, right?).

At least, I was pretty bored.

Thankfully, it’s a short book. But even so my eyes kept sliding off the page. I laid the open book face down. It just felt like a slog.

And to be clear, I’m not saying that the book was bad. Plenty of other people have liked it (a lot). But nothing in it felt important to me, none of the narrator’s priorities were my priorities, and I knew I didn’t care about the characters or the plot.

In this case, I was bringing my fatigue with Literary Fiction and great musings on the nature of Humanity and Memory and Time. I was already done before I started.  I don’t know that I would have found the book especially compelling even if I had been unburdened—it didn’t have the fire I wanted, no electricity. When I finished Sense Of An Ending, I thought to myself, “what was the point?”

It wasn’t for me.