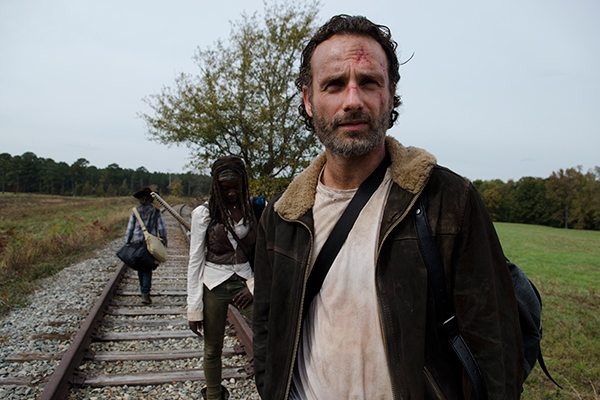 Season Wrap Up: The Walking Dead

Rick and his group have finally made it to Terminus, and the end of another season, but The Walking Dead isn’t about to let the survivors relax for even a minute.

Opening with a simultaneous flashforward/flashback, Rick sits in front of a dilapidated car, his hands and face covered in blood. All of a sudden the show cuts back to the prison, pre-Governor, as Rick, Maggie, and others return from a run to be greeted by Herschel at the gate. It’s a short scene that ties together the two halves off the season, and juxtaposes the near tranquility of the prison, with the blood drenched and trembling Rick.

After the credits, Rick, Carl, and Michonne continue their trek towards Terminus, dodging Walkers and an unlucky survivor along the way. They set traps for animals and make camp in the woods as night descends. Carl sleeps in an abandon car, while Rick and Michonne discuss the promised sanctuary. Suddenly, a gun emerges from darkness beside Rick’s head, and another person appears behind Michonne. It’s Joe and the band of assholes, who have finally caught up with Rick after tracking them from the suburban house. Another guy grabs Carl from the car and holds him at knifepoint, as Joe prepares to kill Rick and do worse things to Michonne and Carl.

That’s when People’s Champion Daryl Dixon steps in the camp, sees his old friends and realizes how bad a group he has fallen in with. Daryl attempts to trade himself for the others freedom, but Joe just has the other assholes beat him up before turning his attention back to Rick. With no weapons or any other options, Rick lunges forward and bits into Joe’s neck, tearing out his jugular. Joe drops to the ground and bleeds to death, and everyone else is so shocked that Michonne is able to grab the gun and shoot the others, while Daryl stomps the guy who was beating him. There’s just the knife wielder remaining, standing behind Carl. Rick calm pushes the guy who his son, and slowly stabs him repeatedly.

In the aftermath, Daryl gets Rick some water to wash the blood off, and explains what happened to him and Beth after the prison attack. They’re both exhausted and trained, put make the decision to press on to Terminus, only a few hours away.The new foursome approaches the perimeter, and cautiously observe the inhabitants. Rick buries a stash of weapons in the ground, and then enter the sanctuary from the back.

Inside one of the main buildings, the find a radio broadcasting station manned by a group of people. One of them, named Gareth steps forwards to welcome them and show the new arrivals around Terminus, after checking their weapons first. They head outside and find more people, including Mary the cook, who met Glenn and Maggie in the previous episode. She offers them a plate of food, but Rick senses that something is amiss. He looks around the compound and notices people, wearing Daryl’s poncho, Bob’s khakis, and holding Herschel’s pocketwatch. Rick smashes the plate to the ground, pulls his gun, and takes one of the inhabitants hostage. Gareth offers semi-plausible explanations put Rick isn’t buying, A firefight breaks out, Rick’s hostage gets hit, and the four of them take off running.  Shooters appear on the roof, and seem to herd the survivors through various parts of the encampment. They end up near a set of train tracks, trapped by gunmen. Gareth appears and orders Rick, Daryl, and Michonne to walk one at a time to a nearby train car. After a few tense moments, he sends Carl after them, the four enter the compartment. It’s dark, but after a moment Glenn emerges from the shadows, followed by Maggie, Bob, Sasha, Abraham, Kenny Powers Eugene, Rosita, and Tara. It’s the whole gang, back together and in as much trouble as ever. Rick, of course, doesn’t seem so worried, and thinks it Terminus who has made the big mistake.

And the season ends. Unlike season three, which had the confrontation between the prison and Woodbury as the through-line with all sixteen episodes, the two halves of season four are completely different. The flashbacks in the finale to the happier times at the prison, are really what ties the season together, and the journey that Rick has undergone, By following Herschel’s guidance, Rick reached his most Yoda-like state yet, and seemed to genuinely believe that their was another way to survive. After the collapse of the prison community, Rick, like the other characters, have grappled with a return to his base self, concerned with pure survival at whatever the cost. Rick has gone from refusing to use his guns, to killing a guy in a bathroom to save his own skin (but the guy totally deserved, don’t worry). It’s has been the pairing of Michonne and Carl, and the formation a new family unit that kept Rick from spiraling into another post-Laurie depression. Rick has become less innocent, and more desperate, but he still wants to protect people. The real Rick is the one who looks out for everyone, and takes doesn’t wallow when faced with adversity. Yes his last line may have been a little too Dirty Harry-like, but the point is that this is the Rick who will take charge, and won’t let the danger come to them anymore.