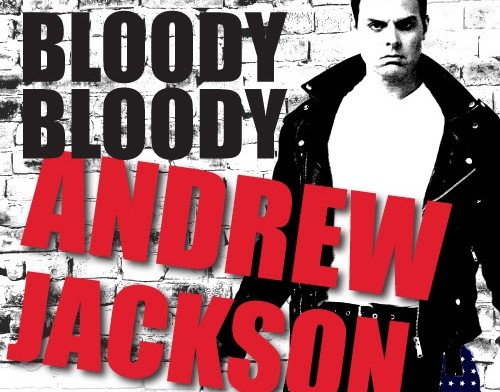 I can’t pretend that I’m not biased when I write this review; I’ve learned that I don’t care for the musical Bloody Bloody Andrew Jackson. I keep waiting for a production to change my mind, but I wonder if my disappointment with various productions has more to do with the book and score than any fault in the productions. However, like Jackson’s displaced Native Americans, I trudge on. The Umbrella (formerly the Emerson Umbrella) presents Bloody Bloody Andrew Jackson, written by Alex Timbers, music and lyrics by Michael Friedman, directed by James Tallach. As usual, Bloody Bloody provides laughs at the expense of any real story or innovative directing, the life of Andrew Jackson playing like a vaudeville act rather than a dissected biography.

Bloody Bloody Andrew Jackson is a modern rock musical about the life of Andrew Jackson (Gene Dante), focusing on his attempts at and terms of presidency. The show is a mock-umentary, recasting Jackson as a rock star with his predominance with populism and the Indians getting the most stage time. The production begins by breaking down the fourth wall with the ensemble rock number “Populism Yea Yea,” exciting the audience into Jackson’s rock concert. But it’s just not exciting. Lara Finn’s choreography feels clunky and the ensemble seems labored under the minimalist steps. Dante has moments of excellent clarity in his singing voice, showing that he has some impressive pipes, but most of the time he sounds like he’s chewing on the scenery, muffled by some horrible sound barriers in the proscenium stage. Dante excels as Jackson because he is able to make Jackson’s mediocre dialogue seem sincere and even charming; Dante can flip on a dime from the sincere to the campy, combing the script for the moments to bring Jackson’s character alive with his best moments coming in Act I during Jackson’s rebellious and youthful phase.

On the frontier, Jackson meets the love of his life, the married Rachel (Andrea Giangreco), a woman who cares for him through injuries and illness. Giangreco finds the heart in this independent woman, but she’s given little but offended background moments through much of her climax, making her story seem, well, second-rate to Dante’s Jackson. Plodding along, Jackson realizes that the corrupt government doesn’t care for him and his native midwestern brethern, and, well, they don’t, and we don’t either. Out come three ensemble females to sing about Jackson’s infamous negotiations with the Indians, and I couldn’t be more bored. What could sparkle with crisp humor falls flat as jokes and moments are rushed, despite the musical score’s ability to pause for jokes. And that’s a general complaint for the entire production. Despite the company’s tendency to trod on jokes and make humor for the sake of laughs instead of integrating any naturally humorous situations into Jackson’s world, Director James Tallach also makes the decision to cut many scenes and songs off with instant black-out instead of allowing the scenes to transition seamlessly into the next. This decision causes the musical to have even more of a clunky episodic feel with the scenes leaping with the humor and landing awkwardly, or, even worse, falling flat on their faces. I find blackouts to be lazy directing because they draw me out of the action and force me to twiddle my thumbs in darkness while I watch a set change or actors waddle off to their next positions. Pet peeve aside, the numerous blackouts drew attention to the poor script and clunky dialogue instead of fleshing out the moments with unspoken action to resolve each scene and moment.

Many of these unresolved moments could be corrected by utilizing Shana Dirik’s Storyteller and Tour Guide. Dirik is the obvious star of the production, billing as the only Actor’s Equity Association member within the cast. While I don’t care much for Equity distinctions, Dirik showed that the membership means something in terms of professionalism. Her storyteller is geeky, awkward, and an endearing presence, a fangirl of Jackson’s with enough raw sensuality behind the pigtails and glasses. She makes her Storyteller unique by finding the perfect character appropriate moments to add herself to the story, bobbing along with the music, smacking Dante’s Jackson’s bum, and giggling along to the story. She understands how to be present in the scene and moments to create a theatrical world, while allowing other actors and characters to have their moments in the spotlight. Her selfless acting pays off in spades because it shows her not only talented but self-aware as an actress and performer. My only complaint is that there isn’t enough of her in the show, making her every entrance feel like a deus ex machina to save the show. Come sooner, come more often!

The ensemble was a mostly forgettable ragtag group of performers with substantial credits to their names. I would have liked a bigger ensemble to fill the stage and perhaps that is why the ensemble felt weak and under-energized. Many of the supporting characters (read: cameo roles) were cut from the same cloth: the women were promiscious, the men effiminate. The jokes wore thin, especially during the fierce catwalk for the sassiest of America’s historical figures, John Quincy Adams (Sebastian Hoffman with the best performance of the bunch), James Monroe (Grant Harris), Martin Van Buren (Michael T. Lacey), John C. Calhoun (Eric Dwinnells), and Henry Clay (Robert Case). The men push their jokes too far, fail to develop memorable characters despite the amble body of history to help them, and rely on camp. Even as I write this, I am reminded of the positive feedback when the original production premiered in New York with praise from the New York Times. Maybe I miss the point? Maybe I want a historical show, even a comedy, to mean or say more than a silly environment for us to use lewd and crude humor to ilicit surprised laughter from our audiences. Or perhaps this production missed the energetic mark of its original, drawn down by uninspired directing, a race for the next joke, and an abandonment of character and heart.

The lighting design by Seif Cristobal was an excellent use of resources and color, electrifying the stage and giving the production the magnetic and energetic feel that was necessary for the production to shine. While the same can’t be said for the other technical elements, they suited the rest of the production and provided the support for the actors and musicians to do their work. I’m still confused by Bloody Bloody Andrew Jackson, and I would welcome comments about what I’m missing regarding the production and the show. Obviously, others enjoyed it given the clapping and the laughter, but I just felt like it was amateur-hour, stuck in a place where the jokes felt pre-conceived and the action forced from the musical’s written word into the actors’ mouthes. With such a vibrant concept and interesting characters, I expected more from this Rock Star and Ten Little Indians.