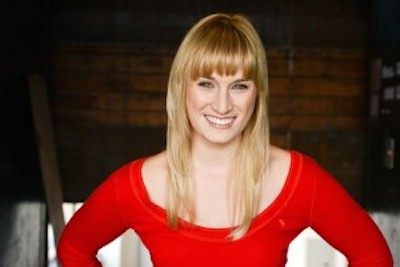 The cast of Humber River Shakespeare Company’s summer 2013 tour of As You Like It was full of delights from Best Supporting Actor nominee Christopher Fowler‘s wry Touchstone to Lisa Hamalainen’s lovely Rosalind, Spencer Robson’s standout Orlando and Andrew Knowlton’s adorable Silvius. Collectively, they’re one of our Best Ensemble nominees this year. The other individual nomination for Humber River is for Best Supporting Actress Lauren Toffan whose Celia had all the energy and heart we demand from our favourite ingenue.

Can you remember the first production you ever saw?
Yes, it was an adaptation of Aladdin produced by a theatre company which at the time, went by the name, “Theatre Windsor.”

What’s your favourite role you’ve ever played?
I’ve loved every role I’ve ever had the opportunity to play. It’s really difficult to choose but if I have to narrow it down to role I had the most fun playing, I would say I found pure joy when I played Ado Annie in Oklahoma.

Do you have a dream part you’d like to play one day?
There are SO MANY!!!! There are incredible roles out and so many intricate, fascinating and complicated stories that need to be told. I do have a special love for the roles of Stella and Blanche DuBois in A Streetcar Named Desire. I feel compassion and understanding for both women and it would be honour to one day play either one of them in a production.

How did you get involved with Humber River Shakespeare?
I volunteered to be an actor for their 2010 Sonnet Show and fell in love with their company and team.

Had you played much Shakespeare before?
My training is in classical theatre and Shakespearean text. I also had the privilege of working with Shakespeare in the Square on Romeo and Juliet two summers ago.

What were some of the challenges of touring?
Being prepared for the weather. Each performance has to be adjusted due to the temperature, how fast the wind is blowing and where the audience chooses to place themselves. It was a challenge, but it kept me on my toes and in order to give an authentic performance, I had to be open and willing to adapt to those changes.

Did you have a favourite location? Did the audiences vary from place to place?
Each audience was different, as usual, but I would have to say my favourite location was Schomberg. It was a beautiful open field with wooden fences surrounding the area and there were horses hanging out just over the fence in their field. It was lovely!

What were some of the unique elements you brought to the role of Celia?
Celia’s journey was a lot of fun to discover and play with. Celia discovers her strength and true self when she leaves the kingdom. I feel like she surprises herself when she makes the decision to leave the kingdom with Rosalind. Without her father’s influence and her servants waiting on her hand on foot, she comes to terms with who she really is and what she truly wants in life.

Lisa Hamalainen played your cousin/comrade Rosalind. How did you go about developing your sisterly bond and complicated power dynamic that relationship required?
Lisa and I were in the same graduating class at the University of Windsor so fortunately she and I had already developed a good friendship. During our breaks throughout the rehearsal process, she and I would take apart the script and utilize different exercises and games to explore our dynamic. I had a wonderful time working with her because she was very open to new ideas and eager to explore new layers to our relationship.

What was the most important conversation you had with your director Kevin Hammond about the role?
Kevin was very trusting and open-minded in rehearsals. He had a clear vision and a great understanding of the characters but he allowed us to make our discoveries through a lot of trial and error. He did help me realize that although Celia, while in the kingdom, is adored and loved by all, when she is in the forest she is not attracted to that kind of admiration and bootlicking. She is attracted to Oliver because she sees a real person who has grown and come to terms with his flaws. She wants a man.

Tell us about working with the outstanding As You Like It ensemble.
I had a blast working with them. Everyone came from a different background with different experiences so every day was a learning experience for me. You also get to know people pretty well when you have to tour with them in 37 degree weather. Luckily there were absolutely no egos and each member was light-hearted,compassionate and professional. I don’t think Humber River would hire anyone who didn’t possess those qualities.

Which directors and actors have had a major influence on you throughout your career?
I’ve been very fortunate to work with some wonderful directors and actors. Throughout the last couple of years however, I would have to say that Kevin Hammond, Peter Wylde and Richard Ouzounian have continuously supported me and believed in my work. My mentor is a wonderful actress named Tamara Bernier-Evans. She and I met through Theatre 20 when I was a member of the Emerging Artist Ensemble and we clicked immediately. We see eye to eye on a lot of different issues and understand and appreciate each other’s work ethic. I feel very lucky to have these relationships with artists I look up to. For the record however, my idol above all idols is Glenn Close. Her work is extraordinary and her journey as an actor has always inspired me. I also got to meet her last summer…it was very exciting.

Do you have any favourite people to work with?
I have found a love and appreciation for every person I’ve worked with. I realize it’s not specific but it’s true. We’re all artists in this business and we all have something to offer. I think it’s important to be open and receptive to each person and experience in theatre because if we stop learning and growing, then we’re no longer doing our job.

What are you doing now? What’s your next project?
I begin working on Queen Millie of Galt with Theatre Orangeville later this month. I’m playing the role of Mona.

Do you have anything you’d like to add?
I just want to thank you for giving me this opportunity. I am very flattered and touched and I’m just really happy for all the nominees! I’m really looking forward to [The Awards Ceremony on] April 7th!