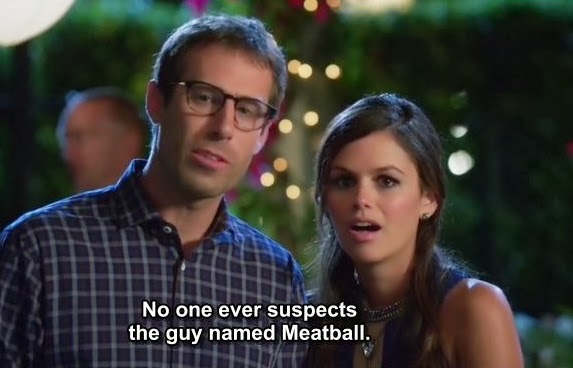 A (Fond) Farewell to Joel

Hart of Dixie is one of my favourite parts of the week. Sure, I watch a handful of important cable dramas and similarly depressing things, but there are only a few shows I get excited about the way I used to back in the pre-PVR days when would interrupt Sunday dinner to watch American Dreams (do you guys remember American Dreams? LOVED that show). I like happy TV. I like wit and charm and characters worth rooting for, not anti-heroes musing on their own villainy while testing the audience’s tolerance for “unconventional pacing”. I like a little sugar in my TV, but I won’t suffer fools (except for one hour a week when I inexplicably still tune in for Glee). The tendency these days is to look at something like Hart of Dixie with its vibrant colour palette, unrealistic looking doctor character and CW home and assume it’s stupid. Certainly it’s simple, but it’s not stupid. Stupid is flat characters not worth caring about. Stupid is plots that come out of nowhere and resolve just because it’s the 42 minute mark. Stupid is the easy joke or the easy sex scene or the easy gun fight. Hart of Dixie doesn’t do any of that. Sure, Rachel Bilson is not a particularly believable doctor (something the show addresses on the regular) and, sure, the town is wacky and has far more than its fair share of wild hijinks (something the show addresses on the regular) but I care what happens to Zoe Hart and Lavon Hayes; I miss Wade Kinsella while he’s on hiatus in the summer and am always glad to see George Tucker again. I look forward to Hart of Dixie every week; it’s charming and witty and self-aware without being annoying about it (hey there, every episode of Community since season 2). I love the cast, I care about the characters, I enjoy the romance and the country music and the unique Bluebell friendships. It’s a darn funny show and it makes me happy. I owe you no more explanation than that. (And don’t you think Jason Street should have a job other than being one of the gosh darned most charming tweeters ever?)

Now, within the small community of non-13-year-old-girls who watch Hart of Dixie, the general aura of complete happiness hit a bit of a snag this season. I had a really busy fall so I wasn’t watching but I heard terrible things about some new boyfriend interfering with one of TV’s most adorable love triangles (we’re always on Team Scott Porter no matter the show, but Wade is totally endgame, right?). “I Hate Him!” decried my one Wade-fanatic friend, and since she hadn’t so adamantly condemned any character since Owen Hunt tried to strangle Christina Yang in her sleep, I took her word for it that this new guy was trouble. How dare he disturb the beautiful oasis of Bluebell! Who was this guy who had angered the Zade fans? One does not simply interfere with a chemistry like Wilson Bethel and Rachel Bilson’s (unless you are Scott Porter, then you can do whatever you want); I would hate him too.

So I caught up. I watched every episode of the new season so far.

AND I LOVED HIM.

Surely, I thought, this Joel guy couldn’t be who my friend was talking about. It’s not possible. He’s so cute! And sweet and flawed and deprecating and trying so gosh darned hard to make a life in this place that doesn’t make any sense to him.

Readers, you know me by now, so you know that a little (okay, big) part of me took pleasure in being seemingly the only person who loved Joel. I like being the weird girl who wants Veronica to be with Piz or Rory to turn down Jess. You know how it eats me up inside knowing how universally popular my beloved Jackson Avery has become. When Dawson’s Creek came on and all the girls latched on to Josh Jackson, the kid inside me whose first crush was Charlie Conway cried a little. But then I thought about how adamantly people hated Joel, and I started to take offense a little. I mean, he was sort of the quintessential “Kelly’s type” guy- tall (at least compared to Rachel Bilson, which admittedly isn’t saying much), dark hair, glasses, writer, smarter than the average bear, more awkward than the average turtle. And he was played by Josh Cooke, last seen by me in the better-than-remembered sitcom Better with You where he was Adorable. I was immediately protective- why did everyone hate someone I loved so much so quickly? I reserved judgement until I made it all the way through to the inevitable breakup (Joel had self-awarely joked that the people of Bluebell thought he was the “act two complication” romance. Viewers knew he would inevitably turn out to be right. Are you noticing the pattern of “self awareness=good”?). Maybe he would do something terrible? I mean, our recapper Taylor turned on her beloved Wade when he cheated on Zoe last year (she was Heartbroken- Taylor, not Zoe, though both I suppose), maybe Joel was going to earn his reputation…

Nope. Nothing. He was written out of the show via melancholy “real world calls”, bad timing breakup.

Friday was the first episode of season three without Joel and I miss him already. But I’m pretty sure I’ve started to wrap my head around why I’m the only one.

The best explanation I can think of (apart from the fact that Josh Cooke played a creepy character on Dexter that people are still holding against him) is thus:

Hart of Dixie is a Josh Schwartz show that is not particularly Josh Schwartzian. To be fair, Josh Schwartz is to Hart of Dixie sort of what JJ Abrams was to Fringe- meaning, an established producing name who has little to do with the show itself (or at least the writing of it). Hart of Dixie was created and is run by Leila Gerstein, but Gerstein having come from the OC stable, the brand is still in play. The Josh Schwartz sensibility defined my generation of female TV-watchers, but not because of his breakout show’s hip 09’er attitude or taste-shaping music and fashion (though those things surely played a part). The biggest effect The OC had on my generation was the Seth Effect (TM). All of a sudden, the lanky, comic-book, indie music, sarcastic guy was considered cute when, the last I checked, he had about as much in common with Dylan McKay (the existing “cute boy” model) as Joel has with Wade. Seth Cohen is the quintessential Josh Schwartz character (see also: Chuck) and he’s why I will always love anything with the Schwartz name attached (unless it’s, you know, a different person named Schwartz). But the Hart of Dixie audience is not the OC audience. The OC audience grew up, got all jaded and started watching Breaking Bad. The Hart of Dixie audience is the next group and they’re not as into giving the comic book nerds a chance as we were (they didn’t come of age with Seth Cohen- it’s an unfortunate reality).

Joel is Seth in a Ryan world (sort of) and, while everyone I’m sure was just as on-board as I was with the customary bromance (Wade+Joel was my favourite friendship since Wade+Lemon), there would have been hell to pay if Seth had tried to horn in on Marissa (in this case, played by Summer- I know that’s confusing; try to keep up). People in Bluebell don’t need glasses. They don’t sweat, they don’t stammer, they don’t make many pop culture references, let alone obscure literary ones. The sunshine-y, drawling oasis of Alabama is no place for neurosis or sarcasm. It’s no place for a Schwartz archetype, sad as that may be.

There’s nothing I love more than a Schwartz archetype- and I’m willing to bet that any other Cohen fans out there enjoyed Rachel Bilson learning about Hanukkah as much as I did (#nostalgia)- but I understand why the Kinsella-accustomed Hart of Dixie fans just didn’t understand the guy; he was a transplant from the wrong televisual universe.

In any case, I loved Joel. That doesn’t mean I love Wade or George any less, I just loved Joel in a more Kelly-specific way; a “you’re my destiny, Cohen” kind of way. If you understand the reference, I know you know what I mean.