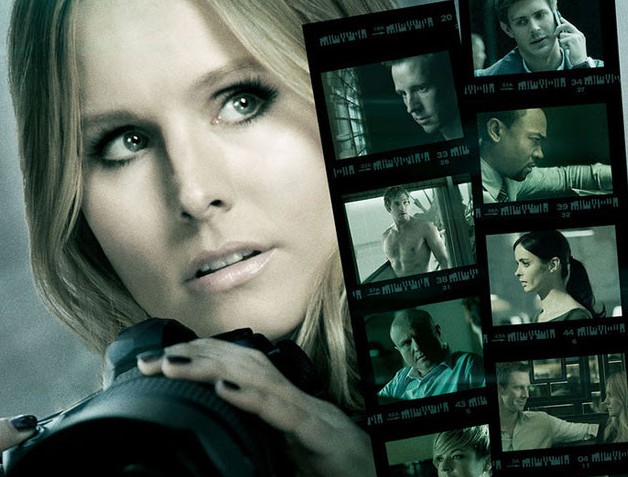 It will surprise no one who is familiar with such matters that a 2 hour long episode of Veronica Mars, packed with all the expectations and narrative necessities therein, is not as good as a 24-episode season of Veronica Mars. The mystery can not, by necessity, be as carefully, painstakingly doled out. The secondary characters cant get episode-long showcases for their own particular archs. And as for Daddy/daughter time? Well yeah, it’s still there, but we still don’t get enough of it*.

The biggest battle the Veronica Mars movie has, a movie that was famously funded by its fans and birthed onto the big screen in a true labor of love by its creators, is that its not a season of television.

The second biggest battle is that it takes place 9 years in the future from the last time we saw Veronica, and doesn’t do a great job of navigating those 9 years in a way that makes them feel authentically lived in. The best comparison for what Rob Thomas and crew are trying to do with Veronica is definitely Serenity, another movie propelled from a failed television franchise onto the big screen. But whereas Joss Whedon made his characters feel lived in, the extra years eating away at them, Veronica Mars never quite accomplishes that feat. We’ll talk about this more later. In the meantime, let’s talk about what’s great:

I love the thematic relevance of the movie. Maybe it’s a sort of fictionalize sadism, but I love that Veronica just consistently can not get out of her own way to get to happiness.  It reminded me of “Normal Is The Watch Word,” the second season opener, where Veronica pretends to want an existence free of bathroom business meetings and late night stake outs, but ends up happily using her super-skills by episode’s end. Veronica was always inexorably drawn towards bad life choices, and as another Kristen Bell vehicle recently reminded me “people don’t really change.”

I love all the in-jokes and fan-service, and I loved the way that the characters all reached fairly believable ends.

It was such a palpable relief to see Keith Mars back on screen, I sighed outloud in the movie theater.

And can I just talk about Weevil for a second? That little moment when he hugs Veronica and begs her not to make him look bad in front of his hot wife before proudly showing off his kids photo? MasterCard’s got nothing on this shit – it’s Priceless. And even though (MAJOR SPOILERS) it all goes to hell – I even love that. It’s perfectly Veronica Mars-esque to have Neptune literally seep happiness away from people.

So basically, I liked it!  A few friends had let slip that they found it underwhelming, so I feel I went in with appropriate expectations and mostly enjoyed it.

But… You ready for the but?

It was really distracting that they decided to shoehorn in the whole Piz/Logan thing. As “epic” as Veronica and Logan’s love may be (and I’m not sure I believe that it is), I simply don’t believe that Veronica put herself so completely on hold for NINE YEARS. Veronica has always been prone to dramatic moments, rash choices, and a thirst for knowledge that drives out anything resembling morality. I was fine with her ultimate choice, even as it was OBVIOUSLY the wrong choice. I’m fine with my protagonist making bad decisions. I enjoyed it when Buffy banged Spike for a season. And maybe Veronica was always meant to be mired in the muck of Neptune. Fine. I’m not Keith Mars, I’ll get over my disappointment in her.

But I can’t get over the idea that Veronica spent NINE YEARS with a guy – a great guy, whom she seems to really enjoy – and then breaks up with him in the span of a phone call. Despite the fact that Veronica took off at nothing more than a phone call from Logan Echolls, Piz and Veronica seemed realtively secure. Shoehorning in a break up so that we wouldn’t judge Veronica for finally getting with Logan was lazy. If they had made the New York life boyfriend someone else, some new guy, I could believe it. But nine years is too long a time for a character as strong and decisive as Veronica to be with someone and not feel an actual connection with them.

Plus, on a purely logistical note, how did it take Veronica so long to finish law school? Did she do a year in the peace corps?

All in all, film and television are very different mediums, and Veronica’s story looks better long form. But assuming that this is what I get – one more two hours vacation in Neptune, CA, – I was happy to get it.

* There is literally not enough  time in the world for me to watch a sufficient amount of Keith and Veronica Mars strong, complicated, hilarious relationship.