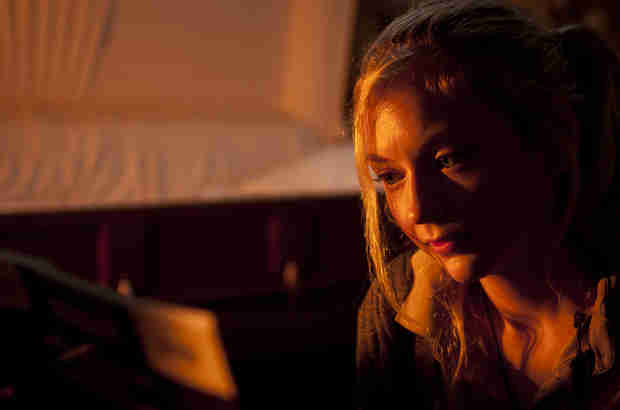 This week on The Walking Dead, the splinter groups split up again, and everyone did a lot of walking, go figure. Beth and Daryl have kept trekking through the woods in search of shelter to replace the perfectly good house they burned down. This is the first time in ages that People’s Champion Daryl Dixon has been seen without his trusty crossbow, as pint-sized Beth learns to use the seemingly indestructible weapon. She finally spots a Walker distracted by food, and it takes Beth about three seconds to step in an animal trap and forces Daryl to swoop in all heroic like. Soon Daryl is giving the wounded Beth a piggy back ride, like the cover to a hillbilly romance novel, as they come across a graveyard. Beth stops to look at a tombstone reading “Beloved Father”, obviously thinking the recently deceased Herschel. Daryl has recently gotten back in touch with his emotional side, and he grabs some nearby flowers (actually they’re probably weeds) and lays them on the stone. Beth takes Daryl’s hand, in a rare tender moment.

Meanwhile, literally on the other side of the tracks, Bob, Sasha, and Maggie keep up the search for Glenn and other survivors. They seem to have stumbled into the fog straight out of a werewolf movie, with Walkers closing in from all sides. The trio fights away the horde, as Bob barely manages to avoid getting bit. While searching for a less ominous place to set up camp, they stumble across the sign for Terminus, the promised sanctuary, that all the characters seem to gravitating towards. Maggie wants to get there, in hopes that Glenn has seen that sign as well. Sasha, on the other hand, is just as pessimistic as Tyreese, and wants to find the nearest town with a sturdy building they can hole up in.

After their happy time in the cemetery, Beth and Daryl enter the nearby funeral home, where there are deceased Walkers made up for proper burials. It’s another one of the show’s frequent suggestions that only the crazy people have survived this long. Further exploration finds a stash of food, that looks almost brand new. Despite the implication that someone is living at the home, and is likely to return, they help themselves to some condiments. While bonding over some jam, Daryl implies that Beth’s company has softened his harsh world view. Suddenly a dog barks from outside, but runs away before Daryl can pet it. When the dog later returns, Daryl opens the door to find another Walker horde. He tells Beth to run as he goes into zombie killer mode. Beth dives out a window, and when Daryl fights his way outside he finds her backpack on the ground and the world’s quietest car drives away. Daryl charges after the vehicle, and runs until he physically collapses in the road.

While making camp, Maggie disappears, ostensibly to find firewood, and leaves a note for Bob and Sasha. She’s heading for the sanctuary, and doesn’t want to endanger their lives in her search for Glenn. Not ones for letting people make their own decisions, Bob and Sasha immediately head after her. Meanwhile, Maggie has found another sign for Terminus along the train tracks, so she resourcefully kills a nearby Walker and leaves a note for Glenn written in blood. True love, people.

Daryl, sitting deflated in the middle of the road, is suddenly surrounded by a group of men with guns. These are the same guys that raided the house Rick was napping inside. The leader approaches Daryl, eyeing his crossbow, and gets a punch in the face, ‘cause Daryl’s a straight badass. Despite the fact that he’s surrounded by half a dozen macho assholes with guns, Daryl doesn’t flinch, and seems to earn leader guy Joe’s respect, and he gets initiated into the gang. And Beth is just gone.

Sasha and Bob find a town by the train tracks and split up, with Bob going ahead. Sasha explores the town and finds a pile of Walker corpses with Maggie, continuing the shows tradition of characters making incredibly stupid decisions for no apparent reason, is lying among them. Sasha’s noise attracts more Walkers. They team up and kill the zombies, and Maggie admits that she needs help to reach the sanctuary. They head back up the train tracks to catch up with Bob.

Character Spotlight: Bob (as a metaphor)

Stupid annoying Bob. His character is indicative of the problems of this episode: he produces a lot noise, makes bad choices, and ultimately doesn’t do much of anything. Bob is subject of this week’s opening sequence, which are usually gripping and tense. Instead we’re treated with a series of flashbacks of Bob wandering alone, Bob wandering drunk, Bob wandering away from Walkers, and Bob wandering down the road as Daryl and Glenn drive up and invite him to the prison.

Bob manages to get almost bitten, alienate both Maggie and Sasha, and fall ass-backwards into a romance nobody wanted. After a bit of awkward flirting, Bob gives Sasha a goodbye kiss when they split up at the town. It feels like this relationship was concocted just to give Bob something to do, besides be drunk and screw things up, and tease other romances just to drive fans crazy (Team Beryl all the way). This episode  crystalizes several complaints that viewers have had regarding the second half of the season. It has had enough action scenes, Walker killing, emotional moments, and ominous foreshadowing to keep everyone’s attention, while not actually moving any plot lines or character arcs further ahead.

And Bob is still super annoying.