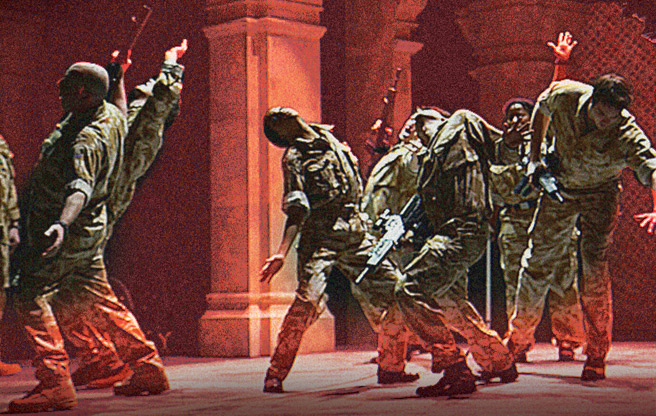 The Two Worlds of Charlie F.

Veterans of recent war in Afghanistan and Iraq come home, having to confront the violent memories from their past, and an uncertain future. Swirled together with a categorical misunderstanding of their sacrifice, unmet needs, complicated moral and financial obligations, and the pride of having risked life and limb for their country – surely the lot of a contemporary veteran is one of the imposing societal question marks in the world, so violently changed since 2001. The Two Worlds of Charlie F. is a play about the divided perspective that comes to characterize the outlook of some of these veterans. They are plagued by their violent past while being immersed in a caring present. Constantly, they look towards an uncertain future.

Eight of the lead roles in the play are played by injured soldiers in recovery or by medically discharged, retired soldiers – some of whom are amputees. The physical appearance of these brave souls’ sacrifice adds a palpable poignance to the play. Many of the story’s characters have undergone amputation or double amputation and seeing actors who could relate, so personally, to their characters on-stage was emotional and remarkable. When you consider that, for many of the cast, this show represents their debut, the effort and dedication to The Two Worlds of Charlie F. is staggering.

Although the script is somewhat episodic and sporadically (awkwardly) musical, the performers evoke such passion as they perform that they deserve respect and praise.

A division that has interested me since I began writing theatre criticism years ago is the disagreement about the role of a critic. Seeing The Two Worlds of Charlie F. produced some additions to my thoughts on the subject of criticism. In short, some people believe that the role of a critic is to promote plays. They are to be insightful enough to see anything and find a reason to recommend it to an audience. This view of critique does not preclude negative comments, but it introduces caution and a teleology to review culture. Otherwise, people believe that a critic is tasked with honestly assessing limitations and strengths of a play. If there are more limitations than strengths, they say so. I found myself wondering to what extent I was assessing the play before me, while I watched  The Two Worlds of Charlie F. Because I was so taken with the cast’s amazing bravery, on and off-stage, I worried that I wasn’t actually tuned to pick up on their deficits as performers in a play. Then I worried that I was too critical, trying to avoid that pitfall.

Naturally, bravely, The Two Worlds of Charlie F. helped me understand my role that evening. Marine Cassidy Little, delivering a stirring, personable performance in the title role, says at one point, about the “uniform” the retired soldiers continue to “wear:” “You’ve got to take it off one day.” It dawned on me that these actors before me were doing just that. In many of their write-ups, there is a palpable division between the description of their service record and the excitement and dedication that came through in their preparation for performance. I was not watching brave soldiers, who deserved praise because of their sacrifice. Rather, I was seeing brave performers, many of whom were in their first show, who deserved praise because of the quality of their performance. An honest review could discuss the awesomeness of these actors’ personal sacrifice and should treat them as professional actors, playing characters in a play, who need criticism to refine their craft.

And so, although the performances were heartfelt and moving – especially during monologues – the company seemed to be stiff around each other. Consequently, some of the moments designed to showcase their camaraderie seemed unnatural. Lieutenant Colonel (Retired) Stewart (Benny) Hill, as Major Daniel Thomas; Corporal (Retired) Stephen “Sandy” Shaw, as Corporal Roger Smith; and Darren “Swifty” Swift, as Colour Sergeant Chris Ward stood out as expressive, captivating performers alongside Marine Little.

The play was hampered by its technical aspects. There were several noticeable gaps in musical numbers or dialogue when one actor’s microphone had clearly lost signal or not been turned on. The lighting was dim towards the back of the stage and blinding at the front. And the set featured very little in the play at all. Because the show is at The Princess Of Wales Theatre, the large spaces on stage emphasized some of the physical gaps and lengthened the distance between performers. The result was that each mistake seemed amplified and that the motivations of the story were washed out. In fact, writer, Owen Sheers’ play doesn’t make much sense at all. He draws significant detail out of good research to craft a fragmented, snapshot-after-snapshot expression of the characters’ lives. Incomprehensibly, there are several song and dance numbers that are accompanied by mystifying musical choices. Why Sheers chose to discuss what seems like interesting, important detail of the rehabilitation process through an aerobics class ensemble dance number, I do not understand.

Seeing the cast move around on-stage was the most exciting element of the play. The use of levels, by actors strong enough to move from the floor to their improbable perch atop a single crutch, for instance, reconfigured the acting space to give the show a distinctive feel. Displays of status were terrific. Sometimes an able-bodied, graceful dancer in the company would stride to centre stage to meet an actor in a wheelchair or on crutches. Strikingly, the dancers seemed to move with jerky-jerky bursts compared to the fluidity of the injured actor.

I would recommend going to see The Two Worlds of Charlie F. It raises interesting questions about what military service means to you, to our country and to the brave young servicemen and servicewomen who go “over there” to defend us and features some impressive performances from some impressive human beings. At the very least, The Two Worlds of Charlie F. straddles the division between the two schools of thought about how to analyze theatre; showing that – with bravery – when veterans face down the uncertain balance of their two worlds, they can find equilibrium on stage.