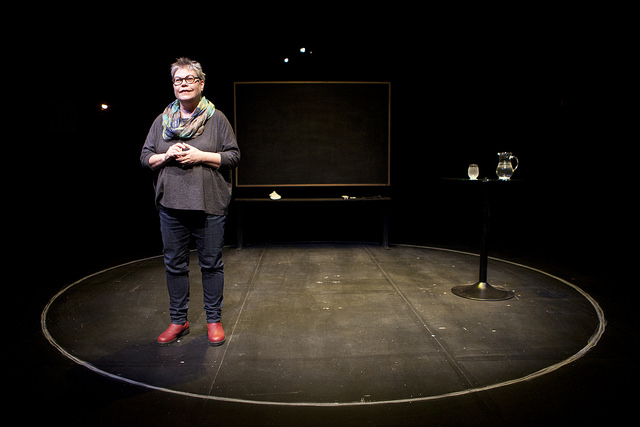 Sea Sick at The Theatre Centre

Created by journalist Alanna Mitchell, Artistic Director Franco Boni, and Artistic Director in Residence Ravi Jain, Sea Sick is based on Mitchell’s book (Sea Sick: The Global Ocean in Crisis) and launching the 2014 season of the Theatre Centre, the live arts hub and incubator, in its beautiful new home on Queen West.

Mitchell is an excellent storyteller. She tells us the story of her upbringing on the Canadian Prairies, how she became a journalist, and why she began writing about scientific issues. We are walked through her research about our ocean, each new discovery building tension in the room as we in the audience connect the dots that lead to an inevitable conclusion: humans’ carbon consumption has deeply altered the chemistry of the ocean, most likely to the point of no return.

Boni makes some interesting directorial choices, including leaving the windows of the performance space uncovered. As a result, the room is never entirely dark and we can see the traffic of Queen Street buzzing by, unrelenting and blissfully unaware of what is happening in this particular room. We can see the the graffiti on the building next door and the street lights burning. I have personally never felt so far from and desirous of nature as I did in that room. Other than the naked windows, there is a chalkboard that is rather ineffectively used (There is absolutely nothing interesting about watching someone write a lot of numbers on a chalkboard and then explain them later. Nothing. Just preset the board and flip it, I beg you.), a table with a jar of vinegar, a simple white circle on the floor.

Mitchell is clearly an outstanding journalist. She is brave and dedicated, and took great personal and professional risks in pursuit of this story. But as excellent a journalist as Mitchell is, she tells us in the first minute of the play that she is not an actor. And she is correct. I cannot honestly say that I was carried along with her journey, that we made the discoveries together, and that I felt the deep despair or flame of hope that she describes in her own reaction to the evidence discovered over three years of research. Truthfully, it feels distant to her and therefore to us, and I’m sure that facing this fact down and being able to speak publicly about it has come at no small personal cost.

There is a story Mitchell tells at the end of Sea Sick about going down into the deepest part of the ocean in a submersible. It involves a George Clooney look-alike and a 3 hour journey with no bathroom, and for the first time in the piece, I felt what Mitchell felt. I saw what she saw. I felt how small we all are compared to the scale of the ocean. And quite frankly, I wondered what the rest of this piece could have been if an actor had performed it.

If a journalist tells their story onstage, is it theatre? Or is it a Ted Talk? I don’t know, but I liked it. Incubator indeed.