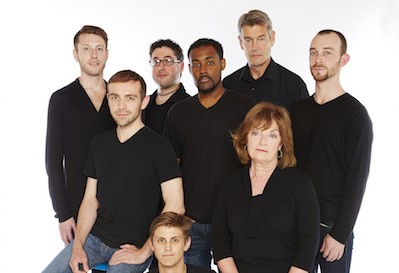 The Normal Heart by Zeitgeist Stage Company touched the hearts and minds of Boston audience members and reviewers alike in the fall of 2013. Much of this success came from the outstanding ensemble  for which they are nominated for a 2013 Boston My Theatre Award for Best Ensemble in a Play.

Maureen Adduci, who played the passionate Dr. Emma Brookner, talked with us about what it meant to play such an influential character, the joys of working with Zeitgeist’s fun but committed cast, and the importance of the process, over the product, of loving what you do.

Maureen, thank you so much for agreeing to interview with us on behalf of the ensemble of The Normal Heart. Let’s start with how you, personally, became involved with Zeitgeist’s production. Were you asked to be part of this production? Did you audition? Was this the same for most cast members?
The Normal Heart was my eighth production with Zeitgeist and David Miller.  David and I work well together, often understanding each other without having to speak, so he asked me to be part of this play, along with Victor Shopov and Peter Brown.  All three of us have worked together before, both at Zeitgeist and elsewhere.  All others in the cast went through the usual audition process.  I knew Mikey DiLoreto and Joey Pelletier but I hadn’t done anything with them.  I had seen Dave Lutheran onstage but had never met him.  The others were unknown to me, but Kyle Cherry had crossed paths with some of the guys.

Talk to us about the first rehearsal. The Normal Heart is very historical play with some real people. How did David help you prepare for the gravity of your work right from the beginning?
Our first rehearsal was a traditional “read-thru” with the cast, director, stage manager and our wonderful dramaturg, Lydia Anderson.  She was a god-send, providing as much information as we could absorb and finding the answers to the most obscure questions.  I cannot say enough good things about her help.

We began “table work” almost immediately with a discussion of the period . . . Gay Rights, sexual liberation, New York, Stonewall, etc.  David focused much on the primitive forms of communication available at that time, stressing how difficult it was without the internet and social networking.  Not even cell phones!  The characters were dependent on word of mouth, print media, and hopefully some TV.  It was virtually the Dark Ages. But it was important for the younger cast members to grasp if they were to portray the urgency throughout the script.

How about your own preparation? How did you prepare to play the dynamic Dr. Emma Brookner?
My personal preparation for the role began, before rehearsal,  with some research.  Who was Dr. Emma based on? Basic background/provenance and then into what kind of physician, her involvement in the disease, the research, and the gay community.  It goes without saying she was a fabulous character study.

Why do you think the ensemble of The Normal Heart impressed audiences and critics?
The support for one another was extraordinary on every level and I’m sure it was evident to our audiences.  We all believed in the production from the get-go.  In its importance, its historical and sociological value, but we were faced with a long and dense script filled with many scene changes. Our director stressed the need for smooth transitions, a flow, that would continually move the story forward and continually keep the audience engaged.  Mission Accomplished!, as evident by the stunned and saddened reaction to our curtain call (which touched us greatly) night after night.

Can you tell us about a memorable rehearsal moment for you?
People always want to know about your favorite role or moment which never makes sense to me.  It’s always about the whole experience, from auditions to final curtain call.  I always told my kids when thinking about a career to remember it’s not necessarily what you do in life, it’s who you do it with. I guess this is an example of that credo.  I personally find ensemble work the most rewarding in theater.  When it’s successful, it’s collaboration in its truest form.  The Normal Heart was the epitome of that.

What was the most challenging moment for you as an actress? Did the cast have any other particularly challenging moments?
Admittedly, I was a little concerned initially that my age and gender might be an obstacle, but it never happened.  This group of young male actors is among the finest working today.  Focused, professional, generous, incredibly talented and for the record, the most hilarious group I’ve ever shared a stage with.  David Miller’s casting was a gift to the audience and to all of us.

What is your biggest strength as an actress? What is your biggest challenge? What do you think that you brought to Dr. Emma Brookner?
As far as what I brought to the role….it’s more what I brought to the group.  Life experience was my biggest contribution.  I was a nurse anesthetist for many years and I was working in a large teaching hospital in Boston during the beginning of the AIDS crisis.  I was very much a part of the fear and confusion of the time and all too familiar with indignities those early patients encountered.  Reliving it for the role was difficult but incredibly helpful.  The director frequently called on my experiences to strengthen the cast’s understanding of the events.

The Normal Heart has a lot of dramatic and tough moments. What made you laugh and remain grounded during the rehearsal process?
As I mentioned, the shared humor was key.  It might sound strange but I have never laughed so hard, thanks to a fabulous group of raconteurs and mimics . . . especially over late-night food and drink when we could “let it all go.” We never took the work home.

Do you have any upcoming productions or projects?
Waltham’s Hovey Players’ production of Rabbit Hole by David Lindsay-Abaire (one of my favorites!).  March 14-29, 2014.

Do you have anything else that you would like to share with our readers?
I love what I do.  I came to this career a little later in life and I am grateful for every minute I get to spend in this world.  But I am often ribbed for my lack of sentimentality when saying good bye.  I am always ready to move on to the next thing.  Maybe it’s my urgency to do as much as I can while still able.  The Normal Heart was different.  I had experienced something incredibly rare, not just in theater, but in life:  the perfect alignment of events and people that resulted in magic.  I’m holding this one near and dear for a long, long time.