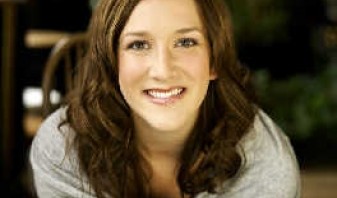 Beautiful triple threat Keely Hutton shone in 2013 as the heartbreaking Chava in The Stratford Festival’s season-highlight Fiddler on the Roof. By creating careful but palpable chemistry with her Fyedka Paul Nolan and playing off a strong bond with her on-stage father Scott Wentworth, Hutton provided one of the great emotional arcs of the season.

Nominated for Best Actress in a Musical in this year’s My Theatre Awards, Keely answered our questions from New York where she was preparing for her big premiere at 54 Below.

Can you remember your first experience with theatre?
My first musical ever was The King and I and I was 9 years old. I remember really soaking up the music, choreo, stage directions, and taking notes, practicing and feeling really passionate about theatre.  This passion continued throughout my life.

What actors and actresses have always inspired you? Are they the same today?
My Aunt Robin Hutton has always been my theatre mentor. I grew up in awe of her talents and watched her go after her dreams and still manage to raise a family. I admire actors/actresses who can truly balance life and work.

What are some of your favourite musicals?
Les Miserables, Once, Matilda, Crazy For You, Last 5 Years, Wicked, Chicago, the list goes on…..

Do you have any dream roles?
No. Joking! Cosette (Les Mis), Miss Honey (Matilda), Maria (West Side Story), “Girl” in Once, Ellen (Miss Saigon), Christine (Phantom), Roxy (Chicago), Polly (Crazy for You), Belle (Beauty and the Beast) to name a few.

In your career so far, is there any specific production that stands out as particularly close to your heart?
Fiddler on the Roof was very special to me. My parents took me to see the Brent Carver Fiddler in 2000 when my Aunt Robin was playing Tzeitel and I knew I wanted to work at Stratford ever since. Fast forward 13 years and there I was at Stratford in the same show on the Festival stage. It doesn’t get any better than that for me!

Tell us about your experience on Triple Sensation.
It was a wonderful experience where I got to study with some of North America’s best coaches in all facets of theatre (including learning how to juggle and spin plates!) I also made lifelong friends and the icing on the cake was winning a scholarship which I used to study at Steinhardt NYU. Overall it was a perfect time in my life to make connections and hone my skills.

Describe your first day at the Stratford Festival.
I felt incredibly grateful, slightly nervous, and determined to do my best. My dream since that trip in 2000 was to work at Stratford so it was a particularly special first day for me.

How did the role of Chava come about?
After about 3 or 4 lengthy auditions for both Chava and Hodel, I anxiously waited until my agent called me to deliberate. Since that incredible moment, Chava came about with many tears, lots of hard work, personal reflection, and help from the fabulous creative team and coaches at the festival.

With a classic musical like Fiddler that’s been performed many times over, how did you go about making the character your own?
I strongly connected with this character upon the first reading of the play. I always bring myself into every role I play (it’s almost impossible for me not to). Chava has such a romantic, joyous spirit that was both wonderful and painful to experience through her story. She is all love and communicates with her heart wide open.

What was the most important conversation you had with director Donna Feore in developing your performance?
Donna really encouraged me early in the process to trust in the physical stillness of the character. Initially I felt quite constricted and even “boring”, but eventually it felt wonderfully freeing because the truth came pouring out of me without having to try too hard.

What’s it like working with Scott Wentworth as your father?
Scott is such an incredible talent to witness both in rehearsal and on stage. He is so funny and was always very nice to me, which made it easier to think of him as my father.

How did you go about developing the sisterly bond you shared with Jaquelyn French (Hodel) and Jennifer Stewart (Tzeitel)?
Jen and Jacq were so great and fun to work with! We three spent 2 seasons together, first in Pirates of Penzance and then in Fiddler and really formed a friendship during our  time in Stratford. I think our mutual love of theatre and immense gratitude for working at Stratford really was the core of our bonding.

Chava’s relationship with Fyedka is slow-building and conservative but needs to be undeniable in order to justify her leaving her family. Was it difficult to develop such a delicate chemistry with Paul Nolan without the physical intimacy and love duets you can lean on in most musicals?
The play is so beautifully written, and Paul was so perfect to work with that it really didn’t need anything extraneous. The audience is going to get it without the big ballad and embrace.

The scene where Tevye turns his back on Chava is the most gut-wrenching of the whole show. How did you gear up for that? Did your Chava approach that confrontation knowing it was the end or did she hold out hope that her father would come around?
The first time Scott and I read that scene together and particularly when I heard him sing “Little Bird,” I was incredibly moved – coincidentally, my dad had the same pet name for me as a little girl. I would show up for this scene each time with my heart on my sleeve, courageously trusting my father would love me no matter what.

There’s a sense of foreboding at the end of Fiddler not only because of the melancholy finale but because of the historical events the audience knows are coming next. Do you think Fyedka and Chava nevertheless find their happy ending?  Write us a two-sentence sequel.
Oh boy. “And so, with her father’s blessing, Chava and Fyedka began their new life together in Poland. They soon had a baby daughter and called her Ana, after Anatevka.” (So that’s why I shouldn’t be a writer, haha).

Did you have a favourite moment in the production?
The first book scene with Fyedka. I really didn’t have to say very much, but it was really lovely “meeting” Fyedka over and over again before the drama really hits in the play.

Do you try and see every play in the season? What were some of your favourites of 2013?
My goal was to try and see everything twice, (which was actually impossible with my schedule), however I did get to see almost all of the productions once. My favourites were Waiting for Godot, and  The Thrill.

What have you been up to since Fiddler?
I had the fortune of going home for Christmas (for the first time in 4 years!) where I got to sing with 23 members of my family and the Newfoundland Symphony Orchestra (NSO). The Hutton family was invited to guest appear to sing a Christmas concert as a part of the NSO’s Holiday POPS series. It was incredibly special. I then moved to New York City.

What are you working on now? What’s next?
[I sang] a couple pieces for the Canadian Musical theatre Writers Collective Launch concert at 54 Below in Manhattan. I am keeping busy with workshops, performance labs, coachings, dance and acting classes, auditions, and exploring this incredible city!

Do you have anything you’d like to add?
It’s an honour to be nominated for this award. Thank you for taking the time to interview me!