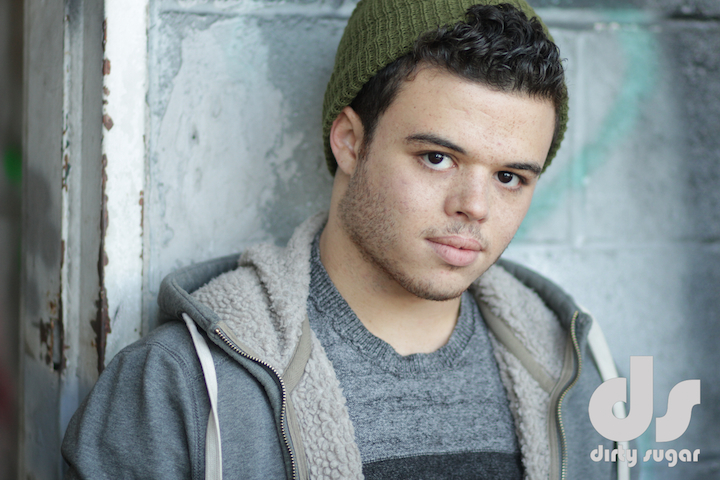 It is not uncommon to see many talented college students involved in professional productions around the Boston area, but Jorge Barranco amazed reviewers and audiences alike with his youthful and truthful performance in the SpeakEasy Stage Company’s In the Heights, earning him a nomination for Best Supporting Actor in a Musical. Despite his busy schedule as a student at the Boston Conservatory and as a performer in multiple spring productions, Jorge talked with us about his Cuban heritage, strong connection with his In the Heights family, and his love for Batman (I think we might have another superhero on our hands)!

Jorge, thanks for agreeing to participate in our Nominee Interview Series. Can we start by talking a bit about your background? Where are you from? What is your performing background? What training do you have in theatre/performing?
Hey there! I was born and raised in Miami, Florida by Cuban parents. My grandmother was a professional opera singer in Cuba, so she gave me the “Musical Theatre Bug.” I have gone to performing arts middle school and high school, and I am now a musical theatre student at The Boston Conservatory.

When did you know that you wanted to perform? Are you drawn to any particular kinds of theatre/performance?
I think I figured it out in high school when I realized that it’s what I wanted to do for the rest of my life. My favorite kind of theatre is comedy. 1. 2. PUNCHLINE! I have also been getting into more experimental stuff as well.

If you were to be on America’s Got Talent, what would your talent be? What do you think the judges would say about you? Do you have any other talents?
I’d definitely be a Latin-Dancing-Rapper. At first they would think I’m crazy but I’ll persuade them otherwise! I love to freestyle rap on my free time.

How would your best friends describe your personality?
They would describe me as outgoing, committed, and debonair. I love to keep my friends on their toes. They never know what to expect with me.

One of my favorite things about your performance in In the Heights was your truthful and sincere acting moments and choices. Did you relate with your character at all? Do you come from a close family? Did you have any relationships similar to your character’s?
I’m not going to lie, this part was written for me. Growing up in a Latin community in Miami, I always wanted to be a revolutionist and make a change in any way I can, just like Sonny. Like myself, Sonny has his tough side but, underneath it all, he is a softy with a big heart. He is a charmer and loves talking to the ladies and making them smile. My family is very close and, even though we are hundreds of miles away from each other, we have a connection that could never be severed. Also, working with Diego (Usnavi) was very easy because he and I have been going to school together since MIDDLE SCHOOL! We have a cousin-like bond that made it easy for us to connect with Lin Manuel-Miranda’s text.

Tell us about your experience as a college student in a professional production. Had you worked at that caliber before? How was the experience? What was the rehearsal process like? What did you learn about yourself as a performer?
Being in a professional production was one of the coolest and most rewarding experiences. I would sometimes have to leave class early and briskly ride my bike to rehearsal. These rehearsals went on during finals week so I had to plan, prioritize, and protect my work. I definitely learned time management because of this show. The rehearsal process was very easy because Paul Daigneault knew what he wanted since the first rehearsal. He put up a large construction paper across the rehearsal room on which we had to define what family and community meant to us. It immediately got us in the world of the play.

What was your biggest challenge in the role? What came easiest for you? What would you do differently, if given the chance?
The biggest challenge for me was definitely some of the higher notes that Sonny has to sing. I am a bari-tenor and Sonny sings the tenor line in the show. I had to work on making my voice light and not pushing to get my notes. I eventually got it before opening night! The easiest part for me was the rapping. I have been listening to this soundtrack since it first came out so I knew all of the raps before we even started rehearsals. Also, another easy aspect was making connections on stage. A lot of the people in the ensemble just so happened to be some of my closest friends, so it was easy to trust them in Sonny’s most vulnerable moments.

What are some of your favorite roles that you have played? What are some roles/shows that you would like to play/perform? What is one role for which you would never get cast, but you want to play?
Some of my favorite roles have been Engineer (Miss Saigon), Finch (How to Succeed in Business Without Really Trying), and Guido (Nine). My dreams roles at the moment are Freddy (Dirty Rotten Scoundrels), Lefou (Beauty and the Beast), and any of the newsboys in Newsies! I would never be able to play Abuela Claudia from In the Heights but that is a role I would LOVE to play 40/50 years from now!

Talk to us about your experience in Boston, as a student. As a performer? What are some of the biggest differences from home? What are some of the biggest challenges? What is your favorite thing about Boston? Do you plan to stay after graduation?
I love Boston because it’s such a big college town and there is something happening at all hours of the day. Being a student at the conservatory we don’t have much free time, but when we do it’s great to come together with other people from Berklee or Northeastern who share the same interests. I truly love working as an actor in Boston because the theatre going community is much more active here than it is in Florida. There is truly an appreciation for the arts in Boston because so many other performing arts and music schools surround us. I would love to keep working consistently in the Boston area. WHY NOT!?!?!?

What are some of your goals and aspirations as a performer and theatre artist? What do you want to do after graduation? In five years?
I’m not sure what my plans are after graduation but I’ve definitely been considering staying around for a bit if I can find work. I also want to go traveling on a cruise or tour. I WANT TO SEE THE WORLD! Eventually I’ll be moving to New York and MAYBE even California.

You and your friends are hungry, and you stumble across a website that will let you order from anywhere in the world. What’s your food selection?
I would definitely order some authentic Cuban food. I was born and raised on rice, beans, and a savory steak! We don’t have any Cuban restaurants in Boston so eating it would take me to Miami whenever I start to feel homesick. IT SO YUMMY!

Batman or Superman?
DEFINITELY BATMAN! I am actually writing a two-person show that is based on Batman and Robin’s relationship behind closed doors. I also think that Batman is much more mysterious and has more Swag than superman. The color black looks good on me.

What is your favorite theatre memory? What is your most embarrassing theatre story?
My favorite theatre memory was doing the In the Heights student matinees. Since the show is so modern, the kids responded really well to it and had a lot of audible reactions to certain moments on-stage. Having kids come up to me after the show and tell me that they wanted to be just like me when they grow up was one of the coolest and surreal experiences ever. My most embarrassing moment would probably be when I played Daddy Warbucks in 8th grade [production of Annie], and my bald cap gradually fell of through the run of the show. It sucked back then, but now I can only laugh at it!

Do you have any upcoming projects or productions?
I am currently working on my last show at Boston Conservatory, Company, as David. I will be working with Speakeasy again in the spring in Carrie, and I’ll be playing Stokes.

Do you have anything else that you would like to share with our readers?
I just want to say thank you for supporting the theatre because it’s a beautiful thing to share. We are constantly living such a fast-paced life and are glued to our devices,  so having 2 hours of people’s time away from their cell-phones is very therapeutic and rewarding. Thank you! THANK YOU!