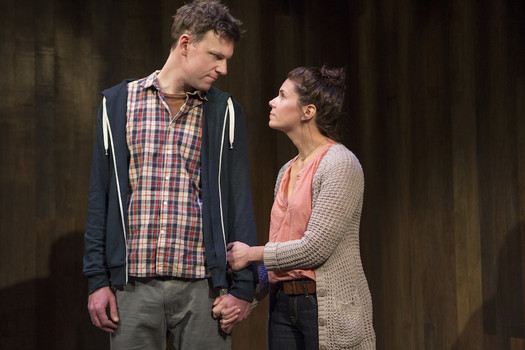 Hold on to your Seats and Remember to Breathe

Admirers of the written word take note.  Duncan Macmillan’s Lungs exhibits some of the best writing I have ever had the pleasure of listening to.  He takes a seemingly simple question – would you want to bring a child into this chaotic world? – and uses the lives of a young couple as the basis for its euphoric exploration.  The environmental debate, for the most part, is overshadowed so don’t expect a lot of green business – not to say that the play doesn’t relay several statistics depicting the real cost of having a child.

The dialogue is all at once quick, sharp, and witty as the actors effortlessly move from scene to scene without props, costume, set, or dynamic lighting changes. One might wonder if they could have done additional physical work to better signal changes, but I was delighted at the effectiveness of the simplicity, thanks to director Weyni Mengesha’s defying choices. It allowed me to really buy into the life journey of the couple consisting of M (Brendan Gall) and W (Lesley Faulkner) who eventually do conceive, loose the child, fall apart, come back together, and live happily ever after.  Sorry for the spoiler but, truthfully, there is an incredible abundance of thought-provoking detail in the text, and the sheer fluidity with which it is disclosed on stage is astonishing.  The narrative might be linear, but the minimalist stage, ironically, prevented its richness from being overshadowed and, thus, it felt anything but.

Faulkner and Gall both have a lot of lines and hundreds of scenarios to live through in 75 minutes.  It’s hard not to appreciate how challenging it must be to not only remember but also embody shifts without the reliance on emphatic transitions.  I would say the title is a double entendre: it does not just capture the modern day concern with our carbon footprint’s effect on air quality, but also references the vocal feat that is this piece in action.  The environmental concern does, none the less, manage to manifest itself materially in W’s anxiety attacks.

There are admittedly times when I wish that I could enjoy a little bit of silence.  The only time we get a breather, in fact, is after W has lost her unborn child.  But it’s three seconds of silence, if that! And while this break certainly contrasts the swift pace until that moment, I needed to be reassured that my own lungs did not fail.  Plus, this climactic moment signals a whole change in direction as we are forced to witness if the relationship being put to the test will end up depleting as quickly as the environment. Further, it seems that the second half of this show is marked by increasingly longer periods of time that can pass by in just seconds.

Unable to respond to his girlfriend’s depression the two eventually learn to live apart and M attempts moving on.  Meeting up after a long while for a coffee and then attending her mother’s funeral, their bond is reawakened and they do end up giving birth to a child after all. Much like his younger self who often failed to find the right things to say in situations of distress, unlike his academic-activist partner who could always find the words, in M’s old age his wife lives on with tenacity as her partner watches on in blissful stillness.

This play is so stunningly discomforting that it makes you realize better than most relationship dramas just how much work it takes to sustain love.  For better or worse, we have learnt a thing or two about growing old with someone.  And while it might not examine as thoroughly as one might like the environment impact of having a child today, it certainly captures viscerally what having a child means in today’s world.

Lungs plays until March 30th at the Tarragon Theatre.