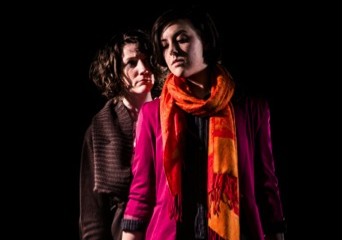 Flat Earth Theatre and director Lindsay Eagle (nominated for a 2013 Boston My Theatre Award for her excellent work directing Rocket Man), should be commended for choosing to put on a show that delves experimentally into a fictional dystopia, a world fraught with troubling issues such as the extinction of the print book, a one-sex gender dynamic, and eugenics. But these intellectual strands did not weave into a coherent theatrical product, and so, despite visually-pleasing staging and a few bright performances, What Once We Felt ultimately proved disappointing.

Playwright Ann Marie Healy creates a future populated solely by women; mysterious allusions to a “Transition” are dropped here and there, but all we know for sure is that this female world is strictly divided between have and have-nots, between genetically pure and privileged “Keepers” and the susceptible and suspect “Tradepacks.” We also know that, in this world, everything is connected and carefully tracked by electronic networks, swipe-screens, ID scan cards, and download records. In this tech-heavy (eerily-familiar) future, fatuous talking-dog police procedurals are passed for substantial entertainment and the print book will soon cease to exist. Writer Macy O. Blonsky (Kelly Chick) struggles to publish what will be “The Last Print Novel Ever” amidst this web of digital intrigue, surveillance, and system control, despite the fact that her editors, agent, and even her own slippery sense of morality, meaning, and truth threaten to smother her literary brainchild.

With a premise like that, who wouldn’t want to love this play? As an English lit academic who grapples with the implication and fearful prospects for print books daily, I certainly felt inclined to enjoy it. And yet the play does not come together; there is far more telling (and outlining, and underlining, and highlighting, and retelling) of these themes than there is showing what is so wrong with it all.

Macy’s fast-talking line editor Laura (Meredith Saran) became “Glib-Operator-Who-Clearly-Shouldn’t-Be-Trusted.” Actually, I would have had no problems with this last allegorical figure: Saran embodied it well and with humor, and it could have been entertaining as hell if this label didn’t become apparent within the first few seconds of her dialogue with Macy.

Finally, Violet (Colleen Moore), apparently the last living Tradepack, saves us time by explicitly stating her role as witness to this tragic societal decline. All fine and well, but this concept was pounded in by having her onstage for almost the entire production, a visual detail from which I didn’t gain that much (though I will confess, I generally have little patience for this “witnessing” character, so often used in current stagings of works ranging from Shakespeare to modern-day).

As I said, there were bright moments. At the show’s open and close, Chick imbued Macy with a nervous energy, with faltering attempts at glibness thinly masking a rising hysteria, in a way that was real and urgent because it was (nearly) bottled. By contrast, the flask-guzzling tics of the middle of the show were less convincing. And while Cheryl’s tragic story and Claire Monsoon’s plight never felt relevant, the two of Healy’s characters whose plight I felt drawn to was the couple, Benita (Nicole Dunn) and Yarrow (Kamela Dolinova). These characters felt like the most convincing elements of the show because Healy’s script actually allowed us to see for ourselves the consequences of this bleak future. In their introduction, their travails, and their ultimate decisions, Benita and Yarrow express subtle and not-so-subtle tension and frustration. Although why Yarrow was visually and thematically gendered male (masculine clothes; given the role as bread-winner; the one supporting, not carrying, the child) was a mystery to me. Considering Healy’s interest in exploring what would “a female-only world look like” (as expressed in an interview on Flat Earth’s website), is this production suggesting it would look much like our own, that certain niches must-needs be filled? I’m not sure.

The set, a thrust whose backdrop was painted on a grid of open notebooks with pages that flipped to reveal new scenes, was gorgeous (scenic design by Allison Olivia Choat). I was also a big fan of the costume design (Cara Chiaramonte); the color combinations of drab browns, greys, and black clashing with loud magenta and orange suggested someone’s attempt to brashly paint over a decaying, darkening surface. Everything is bright in this new world, and nothing is wrong, right? I wish I could have seen such a strong dissonance in the play’s climactic moments as I did in these costumes.

The concepts in this play are more compelling than how they are played out; I intellectually understood what was at stake rather than felt it. But I am more inclined to blame weaknesses in the text than in this particular staging of it. The media release stated that Healy’s play envisions a future with a “hunger for creative integrity.” I could definitely sense some hunger, but my own was not satiated by the show’s end.