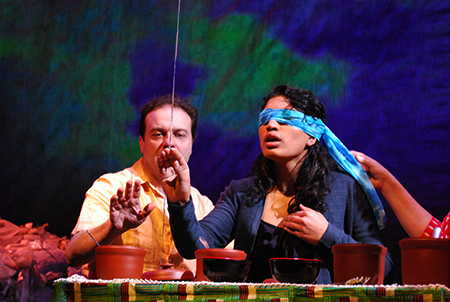 As two actresses slyly emerge from a heap of garbage, Renata (Mina James) is pushed along by her mystic uncle named Doctor Garbage (Richard Zeppieri) on a rolling ladder denoting the exit of a plane and, subsequently, a customs booth. The apprehension and fatigue revealed in this young lady’s eyes, so vividly depicted by James, are not solely from her flight.  It takes me awhile to take this all in, and I find myself wondering how the style of this opening montage and the set might possibly connect  to the protagonist’s quest to find the mother who abandoned her. I later realize that this heap is meant to be representative of the burden on one’s shoulders that digging into the past can begin to expose less figuratively.  Interestingly, 6 Essential Questions is based on writer Priscila Uppal’s own family history and is an adaptation of her memoir covering the same material. The otherwise confounding design (Victoria Wallace) makes great use of simple items to create an atmosphere as surreal as its characters, setting the backdrop for everything from a bullfight to carnival to a quaint apartment.

The physicality of both Renata’s long lost mother Catharina (Huculak) and grandmother (Elizabeth Saunders) is a highlight.  They are two of the most eccentric female characters I have ever seen on stage.  One of the through lines in the show is the vivacious albeit self-centred mother’s ever-growing list of things she loves about herself.  Her proclamation of “The xth thing I love about myself,” never seems to get old surprisingly.

On the whole the play speaks to our human desire for narrative and, specifically, its relationship to memory.  As Renata probes into her past hoping for answers as to why her mother disappeared from her life and that of her brother and fathers, her mother instead wishes to construct a story that is completely devoid of any responsibility for her actions.  The complexity of the situation is heightened by the cultural imposition bestowed upon Renata to think of herself as Brazilian, even though she is Canadian through and through, has never visited this land before, and does not even speak a hint of the local language.

When Renata wants to see the sights, the rest of the family laughs mockingly, forcing her to get caught up in mundane aspects of their daily lives including food and dance moves.  And in a most farcical sequence, the mother actually unretires her gear from a past tour guide gig, providing Renata the extraordinary excursion that she had apparently being preparing to give her daughter upon her magical return.  But return from where and what?  Why is the mother the way she is? It’s intriguing to see how these dilemmas play out with the added layer of psychosis.  The grandmother, even in all her incognizant zaniness, senses something is not quite right with this family.  In fact, her own relationship with her daughter seems rather estranged, and she states that it would be better had Renata been a psychologist and not a medical doctor as they could really make use of the former.

The storyline never seems to be moving forward and some sort of climax finally arrives near the end when Renata, feeling hopeless about reconnecting at all let alone solving any mysteries, decides to leave Rio and make her way back to familiar territory.  An incessantly narcissistic Catharina asks Renata “6 Questions” including if Renata loves her and if her brother loves her.  Renata’s exhaustive set of No’s reveals that there will be no reconciliation here.  Peculiarly, despite having showed no inkling of remorse for her daughter’s struggle, Catharina begins to cry as the lights come down. While the performances are great and the visuals most intriguing, the story, unfortunately, is rather trivial.