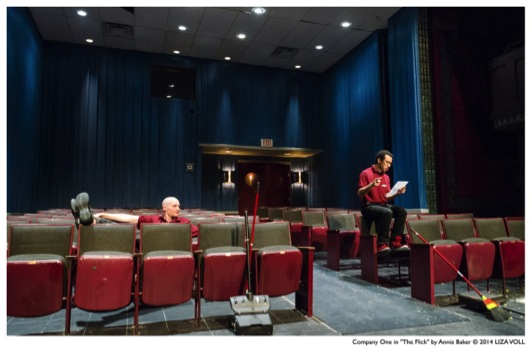 Forget the preamble. If you’re in Boston, go see this play. Right away. [Editor’s Note: We predicted this success!]

Part II of my Baker weekend had me at the Modern Theatre of Suffolk University. As I walked into the space, I was befuddled to see rows of seats where Modern’s thrust stage should have been. But, of course, this was intentional; I was looking at the inside of an old independent New England movie theatre. Annie Baker’s new play The Flick is populated by three of this fictional theater’s employees: Avery (Peter Andersen), a reserved filmophile working his first job as an usher; Sam (Alex Pollock), a crusty staff veteran grudgingly showing Avery the ropes; and Rose (Brenna Fitzgerald), the theater projectionist with attitude to spare and the kindness and consideration of a mischievous seven year-old gleefully wielding a very large rock. The Flick shows us episodic cross-sections of life working at this cinema, and the results range from the humorous to the disheartening. Baker’s play is unflinching in its portrayal of life’s very unglamorous reality, and Company One’s production, directed by Artistic Director Shawn La Count, conveys and enhances this honesty even further.

Annie Baker’s scripts are known for the carefully-chosen pauses and pregnant silences that permeate dialogue; Baker is aware that, unlike in Hollywood movies, conversation is actually a complicated phenomenon that rarely flows in the directions we expect. We quote films, but no screenwriter gives us eloquent prompts or smooth one-liners to use. In the wrong hands, a Baker script can either drag into a molasses-like dull mess, or fast-forward into something unrecognizable. C1’s (as it is colloquially called) production avoided either extreme. At the door, I was surprised and a bit dismayed to hear the show would run for three hours. The start of the show was the last time that I felt any desire to check my watch.

We have Andersen and Pollock to thank for discovering that watching two men clean up popcorn under seats for several minutes can be a very entertaining spectacle. Every movement counted; sidelong glances, frenzied sweeping, doubtful pauses, incredulous gesticulation. Avery and Sam have trouble connecting, and their halting conversations reflect the tentativeness with which they approach one another. As they slowly begin to build trust and confide in each other, the fits and starts begin to take shape, and the conversation moves on from weird food that patrons leave behind in the theatre to…funny YouTube videos. And, eventually, to family, romance, and the future of film itself. This is real life; when revelations do take place, it is seldom where we expect them to.

Andersen impressed me with his ability to play Avery both warm and cold. Avery’s enthusiasm in arguing with Sam and Rose over quality films is as palpable as his bleak personal outlook on life, as his fragility, and as his disbelief at the racial and social class lines that are eventually drawn out. By contrast, Fitzgerald seemed at risk of hitting the same note too many times with her blunt, loud, irreverent rendition of the blunt, loud, and irreverent Rose. Thankfully, I was proved way, way wrong about this impression at the close of Act I. I would suggest tuning in more closely to what she doesn’t say to get beyond the performative posturing of the projectionist. But if we (incorrectly) think we have Avery and Rose pretty much figured out from their first appearance, just imagine the delights Pollock brings as Sam. The Red Sox-cap-toting cantankerous Sam is thirty-five years old, living with his parents, and working for minimum wage at a shitty small town theater. Pollock is the primary reason that I would encourage everyone in town to see the show. Go and watch him tear down (almost) every stereotype you had pegged Sam with before he had opened his mouth. Watch him get so physically worked up, he looks in dire need of medical attention. Watch him portray Sam’s humanity with such deftness that I prefer to stick to the abstract rather than undermine it by parroting every expletive, every mop flourish, every anguished cry, every gleeful jab at Avery’s film snobbery.

Speaking of which: the Modern Theatre is located in downtown Boston, and I found it very fitting that the artistic and economic politics of using 35-mm celluloid film vs. digital technology/projection were being discussed in a space that operated as one of Boston’s first movie theaters since 1913, and that is just walking distance from AMC Lowes Boston Common 19, one of many corporate multiplexes whose finances safeguard them from obsolescence. While Sam and Rose decry the theater in which they work as a dump, Avery is mournful at the possible takeover of digital projection at his job. But this really isn’t just a surplus of snobbery; in a world where everyone seems to be sticking to a script and no one can really connect, Avery finds solace in celluloid, in a permanent print, in something unchanging and worthy of being believed in and fought for, in something than will never betray him. Whether or not you agree with him, I’d advise you to take solace from the many contemporary challenges facing the theater (another endangered medium) by seeing a great performance of a gifted playwright’s new work, produced by a company as innovative and ideologically impressive as C1.

The Flick by Annie Baker plays at The Modern Theatre, Suffolk University until March 15th.