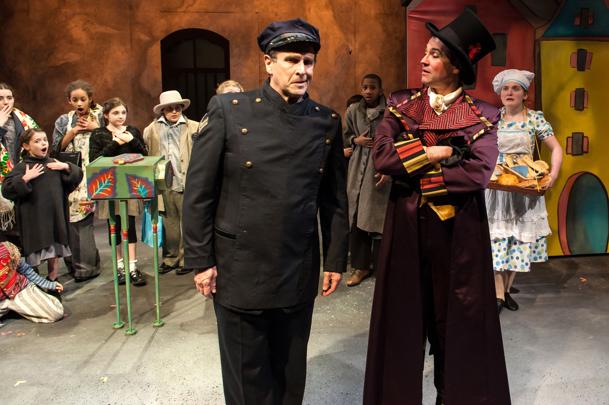 Good theatre moves you in profound and unexpected ways. However, good theatre is also good storytelling. Like children gathered around on the carpet for story hour, we flock to the theatre to be entertained with characters and stories which exceed our own little world. These stories open our minds to new circumstances, new stories, and new ideas. The Central Square Theatre has pushed itself with artistic integrity and grit. Though quite mainstream, they are effective storytellers, offering a rich season of stories begging to be told. Their double-billing of But the Giraffe! and Brundibar is no exception. While not offering anything truly profound in terms of the performances or the technical, the stories are so heart-wrenching, poignant, and delightful that you can’t help but be swept up in the magic of the storytelling.

But the Giraffe! is the “curtain raiser” straight play written by the famous Tony Kushner of the Angels in America epic plays (among other fantastic works). This play allegedly gives context to the feature work, the hour-long opera Brundibar. Fine. The play looks at the complicated world for a young Jewish child during the Holocaust. The brilliance is the seeming innocence of the piece. What looks like a family vacation or summer travels for a little girl grows and changes into something quite, quite different. At first, I was hopelessly bored. The adults move the story forward at an almost dirgishly slow pace. The premise? A little girl is given a suitcase and told to pack, what little girl is going to do that, until she can’t fit her quite large giraffe. And so she is faced with decision after decision, some easier than others, about what to leave behind. The saving grace is Nora Iammarino as Eva, the young girl. She is delightfully cast and a precocious child to watch. She has wonderful facial expressions and a musical tone to her voice that I hope develops as she matures as an actress. The short opener is a mere framing device for the title work, Brundibar, and it feels like it. With the exception of a rather cleverly directed and choreographed ending to the piece, the performances rarely offer anything interesting and the piece seems to work on a metaphorical level rather than an artistic or aesthetically-pleasing dimension. Moving onto the main event . . .

Brundibar has another seemingly simple premise: a young boy, Pepicek (played with bounding energy by Alec Shiman) and his sister, Aninku (played with sweet sincerity by Rebecca Klein) need to save their sick mother by buying her milk in the town market. However, the children have no money so they decide to use the only thing they do have: their beautiful voices. The town market is controlled by the “evil” organ grinder Brundibar, who runs the children out of town with threats of ordering them to be arrested by the local policeman. The children escape to the woods, where a Dog (played with outstanding physicality by Phil Berman), a Cat (played with the sweet vocals by Christie Lee Gibson), and a Sparrow (tenderly played by Debra Wise) encourage the children to fight back against the bullies with the help of the town’s other children and song. With mounting energy and joined voices, the two children orchestrate a rebellion through song and music (with the help of some hijinks by the animal friends) to overthrow Brundibar.

The opera is remarkably simple; the songs are repetitive and alternate between song and dialogue with regularity. Shiman and Klein are a wonderful pairing together, though Shiman is a bit grating in his mannerisms and performance. Does Klein’s Aninku really not notice how annoying her little brother can be? It almost ruins the magical realism not to comment on it somewhere in the opera’s short performance. The show, as a whole, feels under-realized. Perhaps it’s inconsiderate of me to judge a piece that was performed over 50 times in a Nazi concentration camp and which holds a special place in opera and political history. However, the opera could use some serious additions; it could be a much better show with additional complexity and fleshing out some moments. As written, the opera focuses a bit too one-dimensionally on a common theme: “bullies are everywhere, join together to fight them.” On this simplistic level, the opera succeeds. The Underground Railway Theater at the Central Square Theater assembles a varied group of children actors to form the ensemble for this opera. The ensemble is a mixed-bag in terms of talent, but they are all engaged, interesting, and passionate, which, I suppose, is all I can really ask.

My issue is that the organ grinder Brundibar is perhaps too appealing, too charming, too present as a performer for us not to consider the alternatives. John F. King steals the show with his artful turn as Brundibar. From his arched eyebrows to his kicks, King performs for and seduces us much like Brundibar for the town’s children. We are drawn into his world and perspective. As an “adult,” I also engaged with the opera’s lyrics; surprisingly, Brundibar has some truthful stuff to say. Does that make me a horrible person? Scott Edmiston’s clear focus is to engage our emotions more than our intellect. Frankly, I found the child ensemble singing from the concentration camp barracks a little *too* emotional and heavy-handed. A few softer touches would have gone a long way for me not to feel compelled to remember the Holocaust at every turn. In fact, the opera’s simplicity works because it can be interpreted and re-imagined for the bullies which have existed throughout our present and past.

Interestingly, the opera leaves us on an uneasy note. In the darkness, we see King’s face illuminated by flashlight and, in the same “Dr. Seuss sing-song” meter, reminded us that he (and all for which he stands) will return another day. It’s an unsettling moment, and I wish Edmiston had done something with it. It *feels* unresolved with no clear indication of what the future holds. Perhaps a more heavy-handed approach (look at me contradicting myself) could have been a final sung note or melody, or even a resonant chord. In other words, I wanted the opera to somewhat resolve itself and leave on a more hopeful tone (and tune). I wanted to believe that we had learned something by watching this opera (power of music, unity and strength in numbers, the persistence of bullies), and that we had gained some knowledge and skill to prevent repeating the opera (and its history) in our future. Perhaps I’m a cockeyed optimist, but I think the opera gives you something more than what was offered.

Regardless of my complaints regarding the directing for both pieces, it’s all too easy to get swept away with the emotions and music and story of these pieces. By the way, wonderful accolades to the Puppet Designer David Kichter and Puppet Builder Brad Shur, along with Costume Designer Leslie Held for their wonderful animals. What makes these plays special is that they are easily accessible to children and adults, provide timeless points for discussion after the performance ends, and offer child performers an opportunity to engage in the art of storytelling and live performance. They deserve support, even if better productions have been staged elsewhere.

See Brundibar & But the Giraffe! (adapted by Tony Kushner, music by Hans Krasa and libretto by Adolf Hoffmeister) at the Central Square Theater, produced by the Underground Railway Theater, from March 6 to April 6, 2014. Don’t miss magical storytelling and an opportunity for important post-show discussions about these shows’ timeless and timely messages.