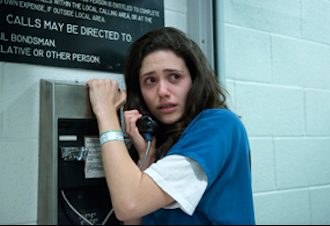 I’ve been saying for years that Shameless is one of the best series currently on TV. And that stars Emmy Rossum and Jeremy Allen White, in particular, are doing can’t-miss work. They’re both past My TV Award winners and nominees again for 2013 but it’s Shameless‘ currently airing 2014 season that you’re going to need to tune in for.

The season so far hasn’t been the series’ best (not exactly a low bar). Ian’s all but written out and Lip starting college means he’s not integrated into many of the main plots anymore, putting a lot more story pressure on the younger characters who haven’t quite found the same levels of depth as their older siblings yet. Debbie’s desperation for a grownup romance has been compelling (and this Matt fellow is intriguing) but Carl’s attempts to save Frank haven’t had the shocking panache of last season’s faux-cancer storyline. Fiona’s relationship with Mike opened new territory for her psychologically but her steady paycheck and health insurance has eased some of the pressure (though I suppose that needed to happen considering both Lip and Ian are no longer contributing to the household income). I like that Lip’s having to learn how to work hard for academic success, but I’m not convinced that a brain like his couldn’t coast just a little bit more than they’re letting him (the work-study pain is brilliant though). Meanwhile, I’m bizarrely really enjoying Mickey’s new expanded role as a pimp running a “rub and tug” out of the apartment above the new Kev-owned Alibi Room (complete with his Russian wife as one of the hookers) but Kev and V attempting to make money to support 4 impending babies feels like a strangely straight story for the couple who spent last season trying to knock up her mother. Overall it’s been a fairly unremarkable season with the highlight so far being Frank’s awkward connection with a newly discovered daughter, Sammi.

But then last week’s cliffhanger sent the fourth season on a new, dramatic and clear trajectory: 3-year-old Liam got into a stash of coke Fiona had for her birthday and ended up in the hospital with possible brain damage. Fiona was carted off to prison for possession and child endangerment.

Because Showtime is an awesome organization, the landmark next episode was made available for media preview. Set to air tomorrow night- February 16th at 9pm- “Iron City” is by far the best of the season (though the show has been so consistently excellent that it may still not be the series best). Not only does it set out a clear course for the season’s final episodes but it raises the stakes, brings the family back together (the stories are always best when the Gallaghers are in one place), makes use of a character (Liam) rarely used for any real story purpose, and puts Rossum and White right up front to carry their most dramatic storyline yet. They’re both magnificent as they navigate the aftermath of Liam’s accident, Fiona experiencing the horrors of her arrest (there’s a strip-search scene that should win Rossum her Emmy) and Lip faced with being the only adult for the first time in his life. Jeremy Allen White has done amazing things with the series’ best character for years but his work in this episode raises the bar.

Meanwhile, a heartbreakingly affable doctor played by Scott Grimes (aka Easy Company’s Sgt. Malarkey) delivers the final blow to Frank that he’s not going to recover from his liver failure, sending him and Sammi off to look into hospice care and handing William H. Macy the sort of dramatic arc that is the reason you hire William H. Macy.

It’s an excellent episode full of great moments even going beyond Rossum, White and Macy (especially White, that kid is magic) to sleeper star Steve Howey whose soulful Kev is often the source of the show’s greatest (though unexpected) wisdom and guest star Jake McDorman who drags his broken hearted Mike back into the picture because someone called for a good guy (ill-fitting as Mike was, I’ve really enjoyed McDorman’s work all season long). In a somewhat direction-less season, a definitive arc like the one that’s launched in this episode (arcs plural, I guess, since the severity of Frank’s condition is also key) brings the promise of a final few episodes that you really shouldn’t miss.