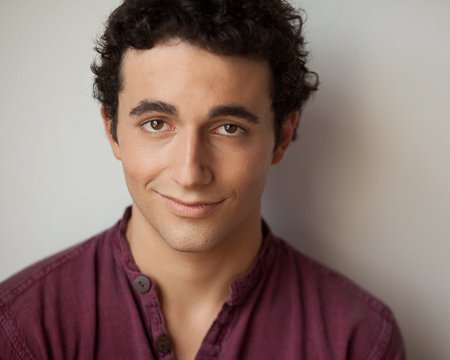 Buddy: The Buddy Holly Story was our favourite production the Lower Ossington Theatre has ever done. It was fun, it was clever, it was engrossing, and at the centre of it was a star performance from the young actor-musician who played the titular legend.

Eric Bleyendaal drops into the Nominee Interview Series to share his witticisms and insights into Buddy, Buddy, and the performance that earned him his My Theatre Award nomination for Best Actor in a Regional Production.

Can you remember your first experience with theatre?
A Christmas play in the 4th grade. I played Santa’s gourmet chef Pierre. Santa goes on a diet. The conflict was sublime.

What’s your favourite part you’ve ever played?
That’s a tough one, but I’d probably have to say Lucky in Waiting for Godot. Every character in that play is so expansive. Without speaking more than two lines, he represents so much: those muted by our society; the trapped; the lucky and the unlucky… Through his mere existence, contrasted with the other characters, you’re pressed with the question of whether or not he’s better off without choice. You’re also reminded about the most insidious thing about bondage: how easy it is to come to love the chain. I could go on forever about that play.

Do you have any dream roles you’d love a shot at one day?
Countless. There’s maybe a couple I would cast myself as.

At what age did you start playing guitar? What about singing?
Started guitar at fourteen I believe. Singing at sixteen when I wanted to act, and the only thing going on was the high school musical. Piano at seven.

Describe the audition and rehearsal process for Buddy.
I think it was two auditions. At the end of the second one, I was sitting in the hallway for ten minutes as they deliberated inside. I was sing-speaking the songs a thousand words a minute to keep me from exploding. When they brought me back in, we had been speaking for ten minutes before I had to blatantly ask whether or not I had got the role. I’m not a fan of auditions.

Were you a Buddy Holly fan before getting the part?
Casually.

What sort of research and practice went into playing a real-life legend and recreating his iconic voice on stage?
A lot of books, a lot of documentaries. There’s only a couple surviving live-performances on film left (as most of them were slowly disposed of (in the days that nobody ever conceived on youtube) so I probably ended up watching each over a hundred times. What struck me is how he broke so many of the conventions of the time as a performer: awkward looking guy, with big thick glasses – not the conventional sex symbol of the time. And in a lot of ways rock and roll up until that point was inextricably linked to sexuality. To take that overt quality out of the music challenged what the music was actually capable of. It was one step in a long line of early rock and roll musicians who tried to shift it away from “dance music”.

I spent lot of time playing the original songs on repeat for hours, obsessing over those little lilts he throws in like nothing. He remains a unique singer, a unique guitar player, and a unique songwriter. If you asked me what the greatest realized rock band was prior to the 1960’s, it was probably the Crickets. So simple. You can hear Buddy Holly in everything from the early Beatles and Rolling Stones, to contemporary bands like The Vaccines (another awesome English band). That simple, fast-paced rock ‘n’ roll that is so inescapably youthful, screaming to the exuberance of life and love. It can’t be contained.

What did you bring to the role that was all your own?
Myself. If I had to figure out what that is I’d probably go insane. One specific thing I tried to do was stick to his style of singing and playing as much as possible. In the show, the songs are supposed to be sped up and made as “musical-ly” as possible, and I gravitated as far away from that as possible. He wasn’t a perfect singer, nor a perfect player. I tried to make it as raw as possible.

Do you have a favourite moment in the production?
The show at the Apollo. In life it took place over a week or so; in the show it’s one night. The Crickets were the first all-white band to play there. At first the reaction from the audience was really rough, but over the course of the week’s performances, they warmed to the Texas hillbillies and their genuine skill and style. In the show, it only takes the audience one song, and so a lot of the reality of the situation is tossed out the window. However, the core remains the same, and it’s a great example of music breaking down barriers that really never needed to exist in the first place. Great rock and roll history.

You were recently in Rarely Pure’s winterized production of As You Like It, for which you wrote all the original music. How did you go about designing melodies for Shakespeare’s lyrics?
Pretty much the same way I’d go about writing them for my own. If the relationship between the words doesn’t evoke anything, either through contrast or comparison, something’s not right. And if you can’t do it with Shakespeare’s words, something’s definitely not right. The winter theme also played heavily in the composition. I feel like winter is at once the coldest and warmest. There’s the immediate physical reality of freezing temperature outside and the warm embrace the moment you step inside, and the internal. Christmas is so popular because it’s in December, and that’s when it starts to get crappy. We need to remind ourselves that sticking together is the best way to get through the hardest times. In the end I was trying to shoot somewhere between classic English ballads and classic Canadian folk, a la Neil Young and Joni Mitchell.

Do you compose regularly?
Yes.

What’s your next project?
Currently under wraps.