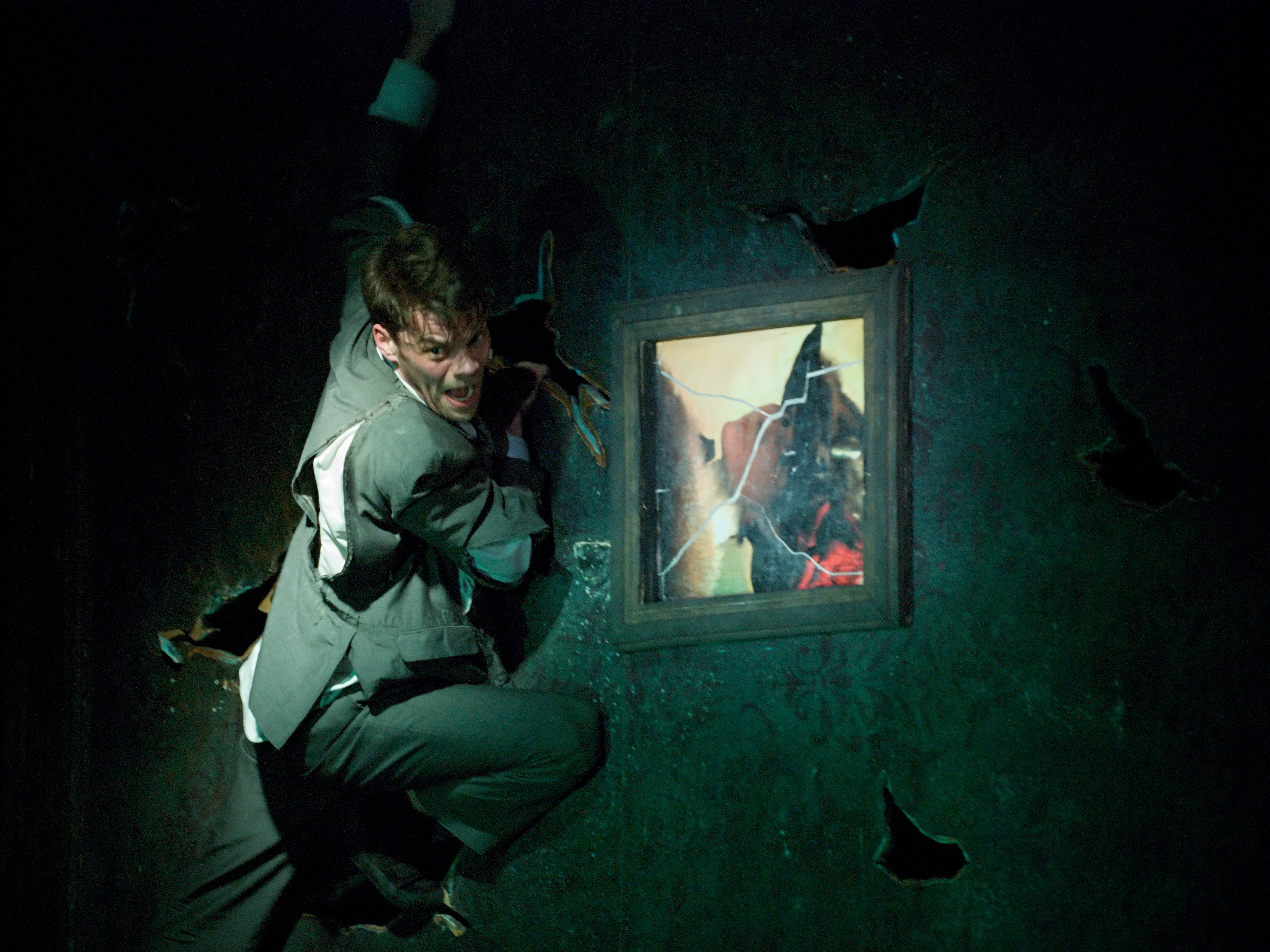 In many ways Metamorphosis, based on the novel by Franz Kafka and adapted for stage by David Farr and Gísli Örn Gardarsson, is a play about denial. “We live ordinary lives” claims Lucy Samsa (Edda Arnljótsdóttir) when the employer of her son drops by demanding to know why Gregor Samsa (Björn Thors) is late for work.  Further, a possible new boarder in the Samsa household Herr Fischer (Víkingur Kristjánsson) states “I hate pretention” despite his speech and every action revealing a peculiar obsession with order and dress.  Part oblivion of looming totalitarian ideologies, and part repression of the newly emerged technologies of the time, it seems a most poignant play to produce, today, when the speed of technology has once again surpassed the average ability to make completely effective use of it.   Further, our modern proclamations of freedom and human rights are often accompanied by bureaucratic and exploitative systems surrounding the same political institutions that fuel them.

This ominous look on life is echoed throughout the story and its characters.  Gregor’s father Herman (Tom Mannion) is all but ready to let his son who has suddenly turned into an insect starve to death. When Fischer is finally exposed to the Gregor-turned-creature, he threatens to press charges, and harshly refers to the Samsas as “vermon” that must be wiped off the face of the earth.  Even Gregor’s sister Greta (Unnur Ösp Stefánsdóttir) who feeds him and takes care of him eventually begins to view her brother as an obstacle towards happiness, casting him away so that her family can once again be a unified body.  Gregor’s mother will suggest the local “ditch” as the place to bury her son’s memory with all the other refuse.

Though published in 1915, one cannot help but feel a Jewish Kafka’s story to be overshadowing the atrocities of the European wars that were to come.  The story is, in fact, heavily autobiographical, each character reflecting upon the writer’s life. Gregor’s otherness cannot but represent the author’s burden as the sole survivor amongst his siblings who perished either from illness, or in concentration camps.  Further, the Kafka’s were no strangers to languages, reflected in Greta’s desire to learn French as a way of moving on in life after struggling with her brother’s horrible transformation.  Finally, all of Gregor’s family members take on odd jobs to cope financially after his transformation forces the breadwinner into isolation, clearly unable to provide like he once could.  Kafka himself was no stranger to taking on different jobs while pursuing his writing.

Designer Börkur Jónsson seems as much in denial of gravity, with one of the most entrancing sets I have seen in a long time, even if it made me wonder how it possibly passed code. It lacks a railing on its second level, and camouflages handles throughout, from which an inverted Gregor breathtakingly hangs and is able to move around swiftly, giving audience a most stunning aerial view of his actions.  Then, when the family unit tragically becomes three, the parents calmly aid Greta in reaching soaring heights on a simple swing made from rope suspended above their home.  The risk of a fall forced me to the edge of my seat, regardless of the beautiful floral backdrop that simultaneously emerges.  Maybe I was just in a cynical mood!

Albeit clearly contrasting Thors immense physical work, the mostly Icelandic cast move in such an overly stylized manner it is sometimes distracting.  Refusing to switch their gazes even when addressing the audience with revelatory universal statements, it felt like a lost opportunity to break the fourth wall with the powerful messages that are articulated more straightforwardly not more than a handful of times.  The obviously talented group has so much to navigate on this risqué set, along with a plenitude of musical cues signalling the haunting world of the insect they cannot understand, one can hardly blame them. I feel this is the type of show that can only get better as the run progresses, and makes me regret that we as reviewers must see complex material when, perhaps, it’s not quite sizzling yet.  Regardless of my cautionary, this is truly a rare spectacle worth seeing and something you will remember for a long time.