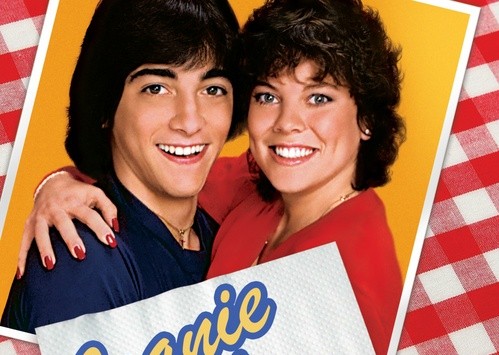 I’m too young for this. The Garry Marshall property I grew up with was Runaway Bride (and, later, The Princess Diaries) so you’ll excuse me if I have no idea who Joanie and Chachi are. That’s an overstatement of course; as one of those cartoonish people who honestly took a university course called “The History of the Sitcom”, I have seen maybe one episode of Happy Days and know that it spawned an ungodly number of spinoffs (7, to be exact). I know that Joanie is Ron Howard’s little sister and Wikipedia just informed me that Chachi is Fonzie’s cousin, so that’s cool I guess. I am also assuming that Joanie might have some fond feelings towards Chachi? But that’s just a hunch. Long story short- Joanie Loves Chachi is one of those titles I’ve heard thrown around for years (if I recall, they talked a lot about it on Gilmore Girls) but know almost nothing about. So, as I embark on the adventure that is a DVD marathon of the soon-to-be-released Complete Series (all two seasons), I invite you to join me for some unapologetically Millennial observations.

The Pilot
We start with the theme song. I’m instantly charmed. Partly because, wow, was Scott Baio ever a cutie pie (loving the blue sweater) and partly because anytime people start their TV show by singing to each other I’m on board (here’s lookin’ at you, Archie and Edith!). The song is cheesy (nothing on the epic catchiness of “Sunday, Monday, Happy Days…”) and neither Baio nor Erin Moran has anything to offer in the vocal department, but I’m somehow still on board.

Lots of applause for someone I don’t know. I guess I’m supposed to know him. He’s tasting sauce (translation: Italian), Oh No! That’s not sauce at all; his wife is boiling pants! Womp womp. A little bit of exposition (hey, we’re opening a new restaurant!) and then… Chachi Is In The Building. And the girls go WILD. The audience is screaming so much you’d think someone from One Direction just tweeted a picture of his thumb. He’s wearing a snazzy vest and makes a cute reference to challenging his new stepfather (that’s the guy I was supposed to know; Wikipedia filled me in again) to a duel. I think I like this Chachi kid. We’ll have to wait a few more frames to see if it sticks.

Are we going to hear the girls every time Baio walks onscreen? I suspect probably. Question: was the failure of this show at all related to the fact that girls don’t like it when their dreamboats appear taken? I think Chachi’s Adventures Looking For Love might have lasted more than 2 seasons.

Bingo the drummer looks nothing like a drummer and sounds a lot like the turtles from Finding Nemo. But he plays some snazzy tunes so I’m cool with it. “Tell me, do you want my love?” yes, yes they do, Chachi.

Oh hey, I know them! Those are Ron Howard’s parents! There’s some other stuff going on (classic “Joanie dresses sexy to prove a point, creepy guy hits on her, Chachi chases him off” stuff) but mostly it’s exciting that the Cunninghams are there. “I’m gonna hit you so hard your grandchildren are gonna be born with headaches”- Ha! Good one, Mr. C.

Aww, sweet little romance scenes. I like these kids.

Now, on to the rest of the series:
– We’re back at the piano and the blue sweater. Honestly, that’s my favourite thing about the series so far. Is that a bad sign?
– Heyo, open shirted Chachi. Cue the screams.
– “Richie Jr”?! There’s a Richie Jr?! *googles Happy Days; realizes how Crazy the plot of Happy Days was*.
– This Mario guy (aka the guitar player) amuses me. But this drummer has Got to stop talking.
– Good sweater #2 for Chachi. This one’s white, I believe it also may be in the opening credits.
– “What would Ward Cleaver do?” awww Al is sweet. I like Al.
– Joanie, please stop dancing. No more step touching!
– Chachi, why is borrowing money from your parents different for girls? Oh, 1982 (wait, 1982! You should know better than that).
– I officially like this random fictional band’s music.
– Joanie, I think it’s time for a new hairdo.
– Hey, Chachi, way to be realistic about marriage! J: “Love will answer all those questions” C: “Oh, that’s a plan”.
– Yup, pretty sure Mario’s my favourite character.
– “What’s a Chachi?” good point, frat boy.
– Is this what frat parties were like in the 60s? I somehow doubt it.
– That’s right, Chach, no drinking and driving. No peer pressure. No bullies.
– Oh good, a nice frat boy is calling Chachi classy. Classy move yourself, frat boy.

And, with that, Season One is already over. That was short.

On to Season Two:
– Still liking the blue-sweatered piano playing. The rest of the opening credits I could take or leave.
– Does Chachi’s hair look stupider than it did last season? Boo. Hiss. Joanie’s bad hair remains the same level of bad.
– Awww, guys, Joanie totally loves Chachi. This “You promise? You sure?” bit is super cute.
– I know that voice- IT’S THE FONZE!!!!!!!!!!! Oh. My. God. Fonzie is here.
– Joanie: “Why are you here”, Fonzie: “because your show needs ratings” (not a real quote)
– Shut her up with a kiss, that’s one strategy that seems to work.
– “We gotta stop forgetting mom like this, you guys”- classic.
– Two Words: Fonzie + Trombone.
– Gotta say, mom is rocking that tambourine. And now she’s dancing. This woman is a Travolta after all. Is this the handjive routine from Grease?
– Aw, Al! #beststepdadever
– I think they sent Scott Baio to a tanning salon between seasons. Not a fan.
– I’m beginning to feel bad for Joanie, no one screams when she enters the room.
– Ooh, reference to an “army physical”, reminder that life isn’t all happy days.
– “You certainly are a sturdy young thing”, um, Chachi’s a little scrawny for that comment
– Chachi and Mrs. C dancing in their plastering gear just made my day.
– Hilariously impractical basketball shorty shorts!
– Oh good, we’re being sexist about a pick-up basketball game. Come on, 20th century, smarten’ up.
– I’m assuming this is a famous women’s basketball player from the 80s. Remember when Lisa Leslie was on Sister Sister?
– Al coming in with the reverse psychology to solve Chachi’s little sexism problem. Al and Mario tied in the battle for best character (Al pulling ahead).
– “I gave you a blue sweater once”- Chachi is totally nailing this boyfriend thing.
– Oh man, reference to Elvis still being alive.
– Gah, the casual way he just said “I love You”. *melting*
– Hey, boxer shorts Did come back in style. It’s like Joanie can see the future!
– Ohmygod, is that Jessica Walter? Guys, I think that’s Jessica Walter. It’s totally Jessica Walter!
– Chachi, I think Jessica Walter is trying to trick you to coming to her hotel room alone tonight. Typical Jessica Walter.
– “I love my Buick” JESSICA WALTER!!!!
– Chachi is currently wearing white overalls and a yellow t-shirt. Snazzy.
– “Just don’t ask me about Ringo” really, Joanie? Really? Ringo? Did you even see the Grammys this year?
– Old Yeller has Chachi’s eyes? Huh
– Hold on, they’ve totally done this “I’ll take you back” song before. I feel cheated.
– Al fires the band; Raising The Stakes.
– When did Joanie start college? Surely that should have been a storyline. Did I miss it?
– Aw, Joanie needs her paper typed for class. #theoldendays
– Wouldn’t plagiarizing a paper in the days of typewriters be just about as much work as actually writing one?
– Chachi counting down to Joanie calling him to come help her- charming.
– Joanie: “This is my boyfriend, Chachi”, Teacher: “Yeah, that looks about right”- amusing.
– “Hit Me With Your Best Shot”? Hey Joanie, your 80s are showing.
– Why is Art Metrano still considered a main cast member? He hasn’t played a major role since the pilot.
– Reference to the Russians having a bomb; another reminder that it’s not all happy days.
– Chachi is the strangest looking fake old man in sitcom history. Mario, on the other hand, is rocking the look.
– Louisa and Al are really good sitcom parents. Interesting, funny, sweet and able to carry their own stories. Good on’em.
– “I got my first Christmas with a father” oh Chachi!
– Happy Days flashback. I’m surprised this is the first time that’s happened. Oh man, Super flashback. Chach is just a little bitty guy. He’s a totally different character, it seems.
– I’m pretty sure I’ve seen every single stock sitcom episode so far in this short two-season run. The bad cooking episode, the pretend-to-be-something-we’re-not episode, the accidentally letting down dad episode, the let’s-talk-about-sex episode, the term paper hijinks episode, the jealousy episodes (bonus points for a character having to pose nude in an art class), the mistaken identity episode, the car trouble episode.
– This one seems like a series finale. A 50 year anniversary complete with “Love Me Tender” duet from our leading lovebirds. This is the episode where they plan to rush into a wedding and don’t go through with it but still decide to stay together forever, isn’t it? Of course it is.
– Chachi, you’re clearly sad to get married without Al. Just wait a couple days, yeesh.
– Don’t worry, Al is sneaky, he’ll talk them out of it in his sneaky sneaky way.
– #BESTSTEPDADEVER! Louisa’s pretty great too.
– And we end with Chachi counting down  to Joanie calling out to him. Sweet.

A Note on the DVD:
Who is supposed to buy this DVD? The reason I ask is that, a few previews aside, there is absolutely nothing on it other than the actual 17 episodes that make up the series. My assumption would be that anyone buying a DVD of the complete series of Joanie Loves Chachi (out Feb 4) is probably a collector, or an ageing Scott Baio fanatic. In either case, that’s the demographic for whom you make reunion featurettes and retrospectives. Dig up an old gag reel; throw in some bonus Happy Days scenes to make a prequel and sequel to the short-lived spinoff; splice together a cheap montage of guest stars- anything would do. I’m all for making classic series available in an own-able medium, but is it asking too much to ask for a couple interviews and a deleted scene?

Final Conclusions:
Joanie Loves Chachi is just about the TV Trope-iest show I’ve ever seen. It’s predictable, hokey, stereotypical and derivative. But it’s also wildly charming. Fonzie’s just a little too much for me in large doses, so I do better with a show focusing on a slightly less wacky twosome like these cute kids. Joanie and Chachi are adorable leading characters with strong chemistry and a believable bond that grounds their silly adventures. The supporting cast is weaker (ugh, Bingo, why?!?) but Mario is good for a laugh or two in almost every episode and Louisa and Al are really fantastic TV parents (complete with Al’s repeated nods to iconic TV parents of yore). It’s silly, but it’s sweet and a few episodes into a marathon you forget your modern cynicisms and learn to love Chachi too.