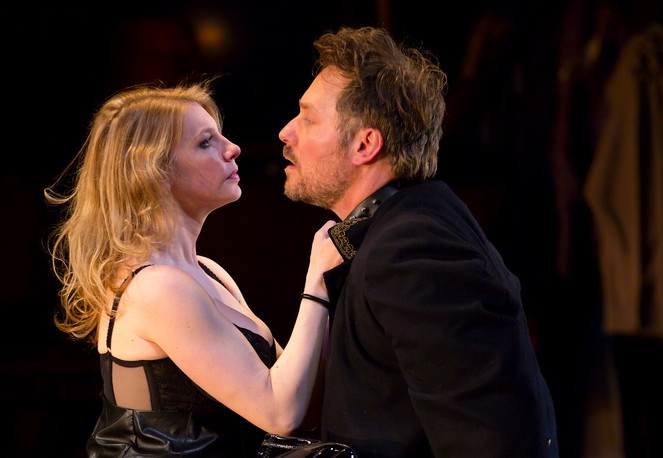 The Huntington Practices Safe Sex with Venus in Fur

Venus in fur. Ven-us in fur. These words are purred by our gorgeous leading lady, Vanda, played by the seductive and mysterious Andrea Syglowski, with growing anticipation. Syglowski expertly casts a spell over Chris Kipiniak’s stuffy Thomas and audience alike during a spell-binding performance of David Ives’ Venus in Fur. David Ives, known for his incredibly witty plays, took Broadway by storm with this alluring and sexy play. Based on Leopold von Sacher-Masoch’s novel, the story of Severin and Vanda tells of two buttoned-up lovers who resist, evade, challenge, and submit to each other; in fact, the work may have coined the term “masochism” for its “submissive erotic entanglement.” Beneath this “porn,” Ives found a delicious story of gender roles, expectations, and power plays that make for an electric night at the theatre. After delving into some research about Ives and his play, I was surprised to learn how concerned he was with creating conflict on stage. As any good artist knows, conflict and drama is essential for the stage; theatre cannot exist without such conflict. Yet, I always saw Ives as, I don’t know, witty and light. I did not expect my notions of gender stereotypes and roles to be questioned upon seeing this play.

The Huntington Theatre Company presents Venus in Fur in all of its glory at the BU Theatre, at the Avenue for the Arts. A stunningly intricate set is designed by Matt Saunders, creating a workable play-area rehearsal room for our cast of two. My only critique about the set is the actors’ lack of using the space, and I almost wish that they had less space. The lighting design by M. L. Geiger enhances the eerie mood during a mysterious, and freakishly-timed, storm with color and just the right amount of effect. Equally successful is Darron L. West’s sound design, perfectly timing his rumbles of thunder after Geiger’s lightning cues as the storm draws closer and closer upon our characters. Charles Schoonmaker’s costumes mostly work; Vanda’s clothes are stunning and breathtaking in parts, fitting tightly to her body to which she uses to great effect.

Director Daniel Goldstein creates some excellent moments between his two actors. In particular, Syglowski’s Vanda and Kipiniak’s Thomas have some provocative moments on the chaise which sent shivers down my spine. Goldstein does an outstanding job of helping Syglowski create her haunting and multi-dimensional character. Vanda is as complex as Hedda Gabler and more exciting for our contemporary audiences. From her first entrance, Syglowski steals hearts and minds, seducing Thomas and audience alike. Yet, something is missing. Kipiniak has some night moments in the beginning; I always appreciate when an actor can have a genuine-looking phone conversation on-stage, and Kipiniak manages this effect as one of his opening  scenes. He seems to get derailed, however, when Syglowski enters. In fact, he seems almost too awkward too soon around Syglowski’s Vanda. Kipiniak never seems to have the power for him to lose later in the show. Without this power shift, the conflict for which Ives so desperately sought in his writing is lost on this reviewer. While the show remains entertaining until the ending tableau, it never excites and thrills the way that it should, partly because of Kipiniak’s stagnant performance. In addition, his “transformation” almost seems like a sad commentary on a gender and role reversal, rather than a genuine emerging dynamic. Instead of allowing himself to truly submit, Kipiniak seems to comment on the character and his submission, taking away from the effect of such switch.

Goldstein creates many clever dynamics between the characters. Syglowski’s gentle rocking of her hips, whether clad or barely-clad, create a wonderful treat and foreshadowing. Goldstein limits the physical contact between the two characters until the very end, mirroring the erotic use of language in the play-within-a-play’s text. However, I felt like the actors could have used the cat-and-mouse dynamic more to their benefit. I never felt a struggle for power, partly due to Kipiniak’s unchanging performance. In short, while the performance and production were truly excellent, I felt lulled into a sense of security. Nothing about the Huntington’s production shocked me. I felt safe in the hands of these professionals. While I would appreciate, and indeed applaud, such quality in other productions (rarely do I find that sense of professionalism and skill), in this production, I wanted something more.

Venus in Fur runs now until February 2, 2014 at the BU Theatre. Don’t let me need for thrill deter you from seeing this provocative gem performed by one of the most renowned theatres in Boston. However, I have my sights set on the end of their season. Up next Kate Burton stars in one of my favorite Chekhov plays, The Seagull. The brilliant Melinda Lopez pens another stirring drama for the stage with Becoming Cuba. Finally, Peter DuBois directs the sharp new comedy, Smart People. What a diverse and magnificent spring at the theatre!