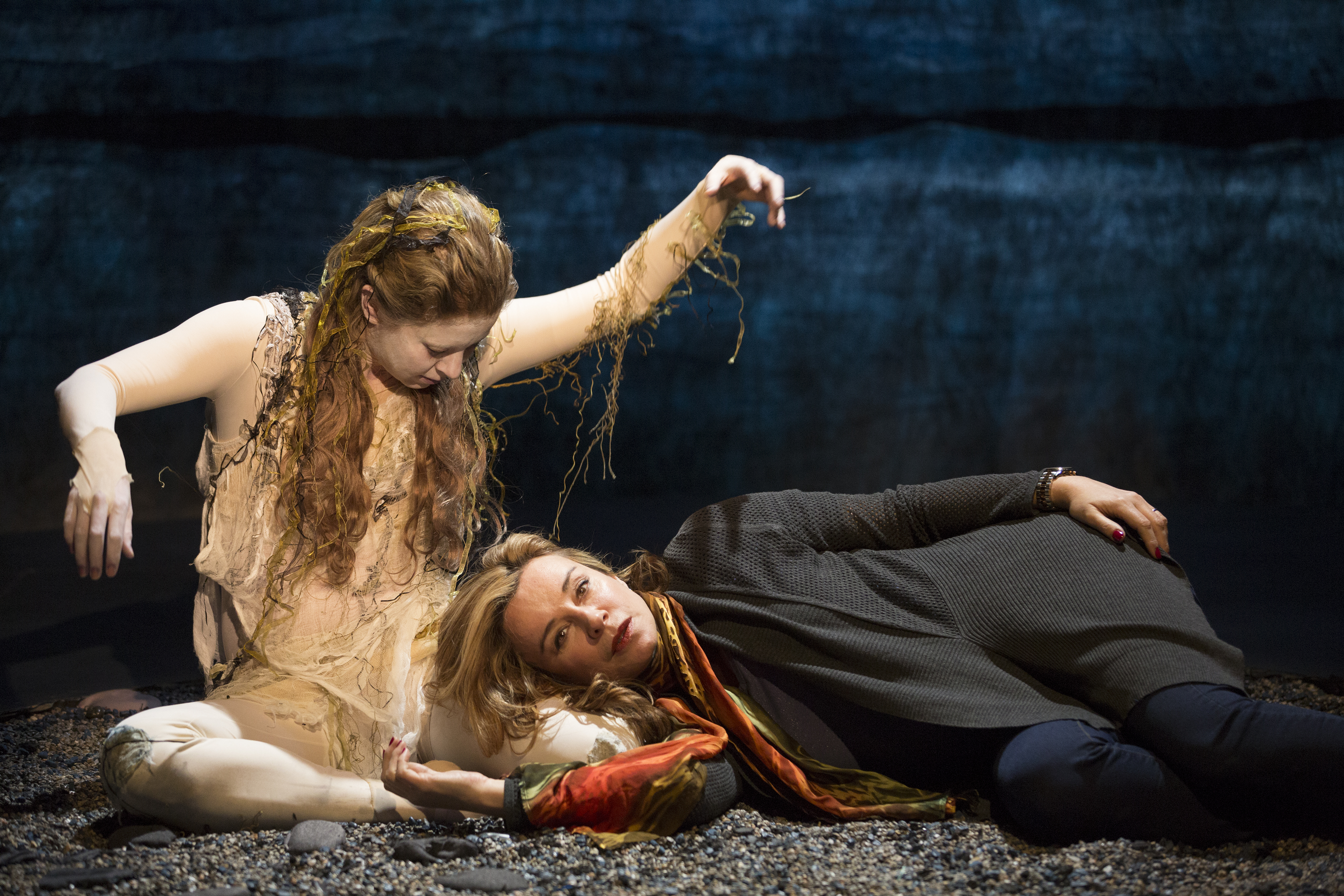 Tarragon’s Flesh and Other Fragments of Love

Flesh and Other Fragments of Love is about a married couple, Simone (Maria del Mar) and Pierre (Blair Williams). They bicker and squabble and get in each other’s way while on vacation in Ireland. Enter a ghostly, dead woman who has been found washed up on the beach. Her name is Mary (Nicole Underhay). The couple works together to re-animate Mary by weaving the story of her life. Temporarily, conflict between them subsides and they seem to warmly love each other. Of course, because Mary is dead, when she returns to her natural, inevitably de-animated state, the couple’s relationship deteriorates.

There is little new about the introduction of a third party to a floundering romance to produce a sudden, positive change. So, arguably, you’d go and see a play like Flesh and Other Fragments of Love to see a unique spin on the story, hear poetic beauty or witness depth of character. Unfortunately, whatever poetic beauty may be within the script was buried under tides of rambling monologue. Pierre spoke at length about minute detail and fantasies of freedom, all potential beauty squandered by his soporific speaking style. Simone, prone to “getting carried away,” screeched through paragraph after paragraph of lament about herself, her unfaithful husband, her vacation, her jealousy, and her unjust fate. And, though she, herself, assures us that her tendency to “get carried away” can’t be controlled, we never see much from her beyond controlled, slow movements. We don’t hear any crying, yelling or whimpering, only her repetitive, high-pitched wailing that settles into a rhythm that had my teeth on edge in mere minutes.

As for depth of character, Simone and Pierre retrace their steps into conflict with each other so many times that, although there is supposed to be a lot at stake every time they clash, it was hard to buy in. Their repetitive character traits served only to entrench the idea that this couple were ill-suited for each other and sucked inertia from the story line.

Pierre’s discovery of Mary on the beach is supposed to feel like an awakening to him. To Simone, we are to believe it is the catalyst for more complaint about Pierre. Ultimately, the play proposes that Mary could bring Simone and Pierre closer together. They share a couple of affectionate, reflective moments in the wake of finding Mary. Unfortunately, it’s hard to believe that Pierre finds anything as beautiful as he finds himself. He waxes on and on – and on – about the corpse and its beauty, savouring his own dulcet ruminations as he’s afforded lots of monologuing time. It’s also hard to believe that anything changes the one-note dramatics of Simone’s reaction to anything. Almost any new information encourages her to walk in big, loopy lines around the stage and complain bitterly. And it’s hard to believe that Mary, though animated, would have the potential to bring anything together, especially given her bizarre limpness. Like some sort of wacky, inflatable tube man, or gumby-inspired bride of Frankenstein, she rises out of the gravel and, with rubber knees beneath her, stutter-steps around the stage.

The lighting design, by Rebecca Picherack, was the highlight of the show. Picherack shines strata of different blues, greens and purples on scrim that hangs at the back of the stage to create the sense of the seaside. A figurative representation, the lights don’t attempt to paint a realistic sea scene. Rather, with good use of gobos and soft focus on the stage, Picherack succeeds in creating a sense of “the sea air” that colours all of the action.

There are three delineated acting areas on the stage: the front-stage/table area, the central gravel pit, where Mary lies, and the elevated donut that surrounds it. There are two great theatrical opportunities lost: the first time Pierre steps into the gravel pit and nothing happens; and the first time Mary steps out of the gravel and nothing happens. Given the efforts made to establish Mary’s own space in the first section of the play, when Pierre slowly, gently steps into the pit the audience holds their breath like a teenager with a lighter under the fuse of a hand-held roman candle. And like that moment when the fuse, alight, disappears into the tube and only a heavy silence follows, the audience is left contemplating what brilliance could have been…and what to do with the now-useless tube.

In fact, considering the way Flesh and Other Fragments of Love created divisions it didn’t use to for dramatic effect on-stage, one might apply that criticism more broadly to the show. Given the deep divides between Simone who is lively, hot-headed and emotional, Pierre who is controlled, stoic and self-centred, and Mary who is dead – when these diverse characters cross, we expect fireworks! Instead, we’re left wondering how the fuse could go through that little hole, still on fire, and not ignite whatever the heck makes the fireballs come out.