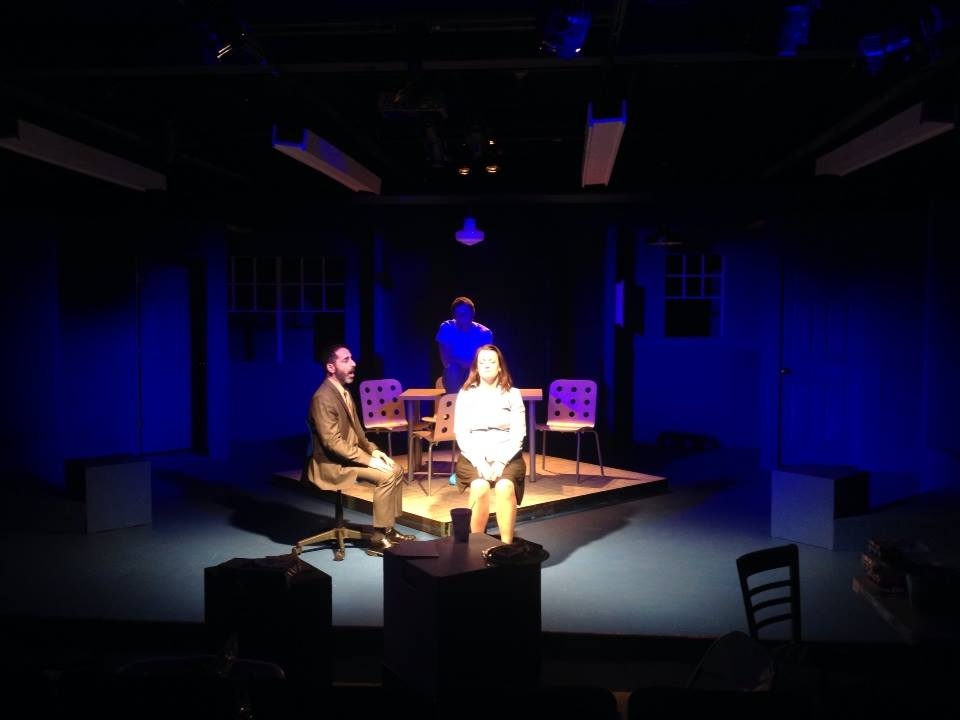 Next Door’s Next to Good Next to Normal

Next to Normal presents a topical depiction of living with and loving someone who has a mental illness. Brian Yorkey and Tom Kitt were almost ahead of their time, especially since many recent shootings have rocked communities out of their complacency regarding mental illness and what it means to be alive. Next Door Center for the Arts explores the struggles of Diana (Becky Ruccio) and her family in just another day in their lives in this poignant and heartbreaking production. Without revealing too much, something is not right with this family and some of the best moments come in the family members’ struggles to connect and relate.

I had avoided this show for a while. After seeing SpeakEasy Stage Company’s production, I wasn’t ready for a reprise because of professional and personal reasons. However, I was intrigued by Next Door’s company, their mission, and their show selection. Located in Winchester, MA and with Equity performers, Next Door presents a strange dichotomy for me to review. They are not quite a SpeakEasy or Lyric, but they are certainly not your community theatre or fringe. They stand on the cusp of greatness. Their production of Next to Normal could have se t them apart. With some strong showings, they almost did it for me. Next to good would be the best description for this production.

I reviewed on opening night, and while the actors seemed abuzz with energy, they also seemed tired, especially vocally. Ruccio had some superb vocals, creating just the right amount of ferocity and verve to let me know that she had some fight in her still. I think her strongest moments were her inability to quit, to give up, to throw in the towel. Her desire to keep fighting through hell or high notes created the perfect poetic beauty for me. I connected with her struggle to get through each day, especially when the world didn’t make sense. I could see the struggle to understand across her face and in her voice. Her “I Miss the Mountains” was rich with feeling, while her “How Could I Ever Forget?” ached with longing and regret. My complaint? She was too young. Sexy, alluring, and full of life, her Diana was five to ten years too young to capture the gravity of loss and longing. I tried to ignore it; I tried to look past it. But I just couldn’t. She meets the vocal demands (and, oh, there are many), and she approaches the role with gusto. But she’s far from the Alice Ripley (which is very good, but also causes pause, discomfort). I found myself asking, “How *old* was Diana when she had Gabe? Fourteen?” (Gabe was born eighteen years ago when the play opens—more on that in a minute). In the grand scheme of the production, I suppose it’s a small complaint, but for me, it took me out of the show and the experience.

Jared Walsh plays Gabe, a role that made Aaron Tveit famous in the Broadway community almost overnight. Walsh is a My Theatre favorite, and he impresses again here. My biggest joy was seeing his “I’m Alive” literally come alive. So many actors play the song for its vocal strength and “wow” factor. Walsh ramps it up by playing the song as, literally, a life-or-death moment. He heightens the stakes for his character by pursuing his character’s needs and the conflict from the other characters. I could see the nervousness, the trepidation, the anger, and the ferocity (like Ruccio’s Diana) in this song. He is taunting, selfish, and a little worn and tired. He is not afraid to infuse “less-than-admirable” characteristics on his Gabe to make him a real person, despite him, well, not being one. My complaint? He’s too old. I came into the production with this hesitation. I had seen him tackle Melchior with grace and charm (but that was two years ago and Melchior is arguably “older,” perhaps due to being a leader in a pack with teenagers), and I saw him triumph as Jon (but Jon is twenty-nine going on thirty). Gabe is an eighteen year boy, not a man. As one of my friends correctly pointed out during intermission, Walsh has a gravity about him; he has history and experience across his face. In a phrase, he knows too much to play a boy, despite his ability to nail the vocals at every turn. While I wanted to love the choice to have a more experienced and worldly Gabe, I couldn’t ignore his obvious chemistry with Diana that transcends mother and son. You see, Walsh could have chemistry with a chair, if positioned correctly. What complicates things is a mother/son relationship where the son is too old and the mother is too young. You see what I’m getting at here? Of course, I might have forgiven these unintentional Oedipal moments, if the other allegedly romantic relationships had any chemistry at all.

Doug Jabara plays Dan, Diana’s husband and father to Gabe and Natalie. I saw Jabara in the 2013 Reagle Music Theatre of Greater Boston’s Les Miserables as Javert. Unfortunately, he brought about the same emotional sensitivity and compassion to this role as on the barricade. More than anyone else, Jabara fails to connect with his scene partners. Singing almost past them, few of his comments truly connected for me. At times, he almost seemed to treat the space as far bigger than it was, singing over the heads of audience members. It was a struggle for me to accept any of his love for Ruccio’s Diana, though he did have some fond moments with Natalie, played with increasingly emerging talent by Sarajane Mullins Pompeo. Unfortunately, Jabara’s moments weren’t nearly enough. His coldness struck a chord with me that left me icy and uneasy; these are not qualities that I want in a husband helping his wife recover and thrive with a history of mental illness. Some warmth in his interactions with Ruccio could have gone a long way to solidifying their history and love.

Mullins Pompeo emerges as a strong performer as the show progresses. The beginning scenes just felt rough for me (not helped by her odd on-stage chemistry with Sean Mitchell’s Henry). Mullins Pompeo really hit her stride when it became increasingly clear that she might end up like her mother. Her fear and loathing mix for a deadly mix. However, it is her tenacity, as her character and as a performer, that won my heart. Like Ruccio, her on-stage mother, Mullins Pompeo’s Natalie features some of the same struggles and ferocity that make her a joy to watch on-stage. Unfortunately, her relationship with Mitchell did not do it for me. Mitchell has charm as Henry, something that I had rarely seen; most actors play him solely for his stoner qualities, but it is his winning smile and adoring personality that are the defining personality traits. Mitchell is adorable and endearing. But he’s not a Henry. I didn’t buy his sexual relationship with Natalie for anything past the first verse of “Perfect for You.” Not to say that it couldn’t work; a compassionate platonic relationship between a boy and a girl could be increasingly agreeable, especially if Natalie sees the sexual and purely physical relationship between her parents fail miserably. But that’s not what the script calls for and may add a whole different dimension of complexity for which the show could not bear. With two strong female actresses, I wanted their male partners to match them in their roles, and, well, they just didn’t for me.

Finally, Brian De Lorenzo was good as the two doctors, but woefully underlooked. The roles are limited by their nature, but I never felt like De Lorenzo added any personality to the roles. Maybe it’s just not there (if so, boo on you, Brian Yorkey). But with a soaring tenor voice and a good on-stage presence, I wanted more to his characters. I wanted to know how each of the doctors felt about Diana as a patient and how he was treating each of them. I have yet to see an actor capitalize on this forgettable character, so I suppose I can’t be too critical. Again, my concern is that the show includes only seven characters (and six actors), and two of them seem to be mere plot devices rather than fully-realized characters and people.

Overall, I had trouble writing this review because the production quality was just not there. The set was surprisingly functional for such a small space, featuring a multitude of doors and stairs to transport our characters into a variety of rooms in the house and other spaces in the Next to Normal world. Kudos to Brian Milauskas as set designer and director for making much out of next to nothing. However, the acoustics were abysmal. Yes, abysmal. The band, led by extremely talented Mario Cruz, had two dynamics: loud and very loud. I suppose that it can’t be their fault for assembling a rock band in what can only feel like a renovated conference space with raked seating. The space needs something, anything to absorb sound, especially when the actors are wailing on these difficult vocals. My biggest grief was with the lighting. Again, the space is awful; I understand. But the extent of shadowing and just poor lighting (I can’t tell you how many actors missed their marks with half of their body—including faces—lost in darkness). I won’t name the lighting designer because I know he’s better than his work product for this show. I think that it was just unfortunate to have next to good lighting and sound accompany this show.

I’m conflict on this show, even after writing and heavily editing this review. I want to like it because they attacked the show with a good amount of skill and sensitivity. But there were so many detracting elements that I had trouble focusing on the action and story. Perhaps others with less weird hang-ups will appreciate their hard work? Perhaps they’ve done better work and they were overwhelmed with the material for this show. Perhaps I need to see another show at Next Door Center for the Arts. Luckily, they have a March 2014 production of Gypsy featuring Kerry Dowling, and, coincidentally, directed by Sarajane Mullins Pompeo, and also music directed by the great Dan Rodriguez. I am hesitant about fitting Gypsy in the space, but I look forward to Kerry’s hard work and Mullins Pompeo’s creativity in making it work, much like Brian Milauskas’ use of the space and constraints in this production.