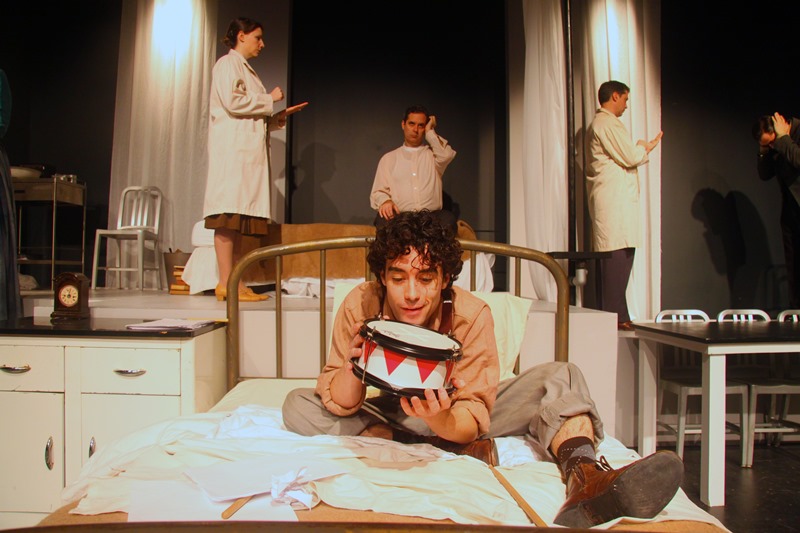 Increasingly, some of the most solid theatre on the Toronto scene has come from companies you could classify as “Indie 2.0” (technically an Equity term but one I’ve decided to allocate a bit more freely). These are companies that operate along indie lines, with small-ish budgets and casts, but use union artists. The effect is a sort of best of both worlds scenario- the artistic freedoms that come with a lack of commercial handcuffs, but the professionalism and talent of established actors, directors and designers. Two such productions took the stage last week, both serious reflections on war executed well if not perfectly by memorable Indie 2.0 stars.

The first was Stuck in the Mud Productions’ take on Michel Garneau’s Warriors. Simply directed by Eli Ham with slightly over-reaching juxtaposed projection images as the production’s only trick, Warriors is incredibly effective. The production’s biggest flaw is a lack of intimacy. I sat in the back row of the theatre and am delighted to say that every word reached me clearly. Unfortunately, however, in the Ernest Balmer Studio, the back row is also the second row so I’m less delighted to say that every word reached me a little too clearly. One of the dangers of Indie 2.0 lies in taking actors accustomed to large houses and handing them a 2-row studio space. It felt, at times, as though the actors were playing to the rafters of a theatre they weren’t in. One of the amazing things about a space like Ernest Balmer is that you can see every eye twitch and hear every muttering; I would have liked to see more such small, natural moments from these actors slotted in amongst the bombast that defines their characters. In general, though, Alden Adair and, especially, Geoffrey Pounsett do a great job in complex, unforgiving roles as ad men trying to glamorize war; they develop a compelling interpersonal dynamic and distinct rhythms that both mesh and clash perfectly with their costar. But the real star of the show is Garneau’s text (translated from French by Linda Gaboriau). The enthralling two-hander is wrought with human conscience. In its deconstruction of modern masculinity and the creative process, it reveals, in equal measure, the depths and failings of two infuriating and believable and infuriatingly believable men. Without being a grand army epic, Warriors grapples more thoroughly with the larger moral implications of war than most stories set in trenches and POW camps. This fight just happens to be set amongst the scotch bottles and cocaine lines of 1980s commercial dealings as Gilles and Paul battle each other, their task, and their better angels.

UnSpun Theatre’s The Tin Drum, on the other hand, is a far more traditional war story, with a non-traditional perspective. As narrated by Jesse Aaron Dwyre’s Oskar, an institutionalized man-boy, Chris Hanratty (also the director) and Shira Leuchter (also a performer)’s adaptation of the similarly titled Gunter Grass novel takes the form of a memory play with the 7-person ensemble filling out every role in the tale. This device is a fine showcase for the strong cast, especially the versatile Leuchter and Cyrus Lane, though few of the supporting characters stand out because of it. Anna Treusch’s stark design is extremely effective, as is Hanratty’s “watch as the mess piles up” direction, but the production rests mostly on the shoulders of the always-excellent Dwyre who grows Oskar up delicately, palpably capturing the wonder, fear, resentment and tenderness that characterize his defining relationships. Compared to Warriors, the WWII-set story of The Tin Drum lacks intellectual intrigue and moral quandary but, from a production standpoint, the smart ease with which UnSpun unspools a far more epic tale makes it, perhaps, Indie 3.0.