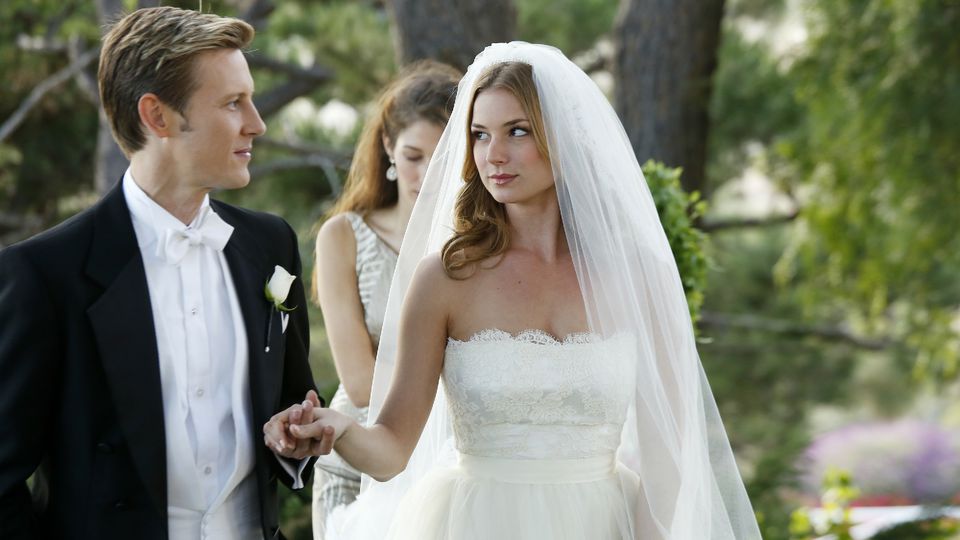 Recently, my roommates and I were discussing our Sunday night television shows. We all felt the need to clarify that they were guilty pleasures, but were also really good. But obviously only to us, and a handful of moms. For me, it’s Revenge. It’s not a fantastic show, and the actors take themselves way too seriously, but damn if they don’t know how to deliver a solid mid-season finale. Revenge starts every season with a flash-forward to the midseason finale. It’s an interesting tactic, but the risky part isn’t spoiling the ending, it’s that the writers never actually know how exactly they’re going to get there. This season was no exception, and the question of who shoots Emily twice in the stomach was as mysterious as Madeleine Stowe’s age (she’s 55. I’ll let that sink in for a minute while you cry over her agelessness). As soon as Sarah was introduced, my money was on her. But the episode wouldn’t be called “Exodus” without the departure of more than one beloved character. Maybe not physically, but definitely mentally.

Let me explain: Daniel, in a drunken stupor, made a decision that rivals Rob Ford’s for stupidest thing done while drunk; he shot Emily. Obviously Daniel hasn’t been a saint after his whole night in the city with Sarah, but I never thought the writers would make him this dark. After learning that Sarah had tried to kill herself, and that Emily had faked a pregnancy to give him a little “extra motivation” to get down the aisle, he became so enraged with the betrayal that he picked up the gun that Emily was planning on using to frame Victoria for her death with, and shot her twice. Once for her and once for the fake baby, perhaps? The most inconceivable thing about the whole situation is not that he would shoot his new bride, but that he “heard the whole thing” and didn’t wonder where his mother went off to after she screamed and Emily said, “Good bye Victoria.” At least he’s pretty, right?

It may have been a little sloppily executed, but this shooting sets up for a great second half. They can’t kill off Emily, but I’m hearing rumors she’ll come back with amnesia. So maybe the revengenda will continue to blame Victoria for the shooting. After all, Daniel would be the only one who knows who actually shot Emily, and there’s no way he’s confessing. Maybe someone saw the whole thing and blackmails him? Maybe he becomes an alcoholic while dealing with the guilt? Maybe Victoria plans her revenge from rich person jail? Maybe she’ll run into Lucille Bluth? A world of possibilities for this late night soap opera.

The setup for the shooting was a little anti-climatic because we knew it wouldn’t end the way Team Revenge wanted it to. And how could it? Once Emily gets Revenge the show is over right? How am I supposed to go every week without Nolan’s snappy one-liners? Maybe I’ll just YouTube Tyson Apostol confessionals.