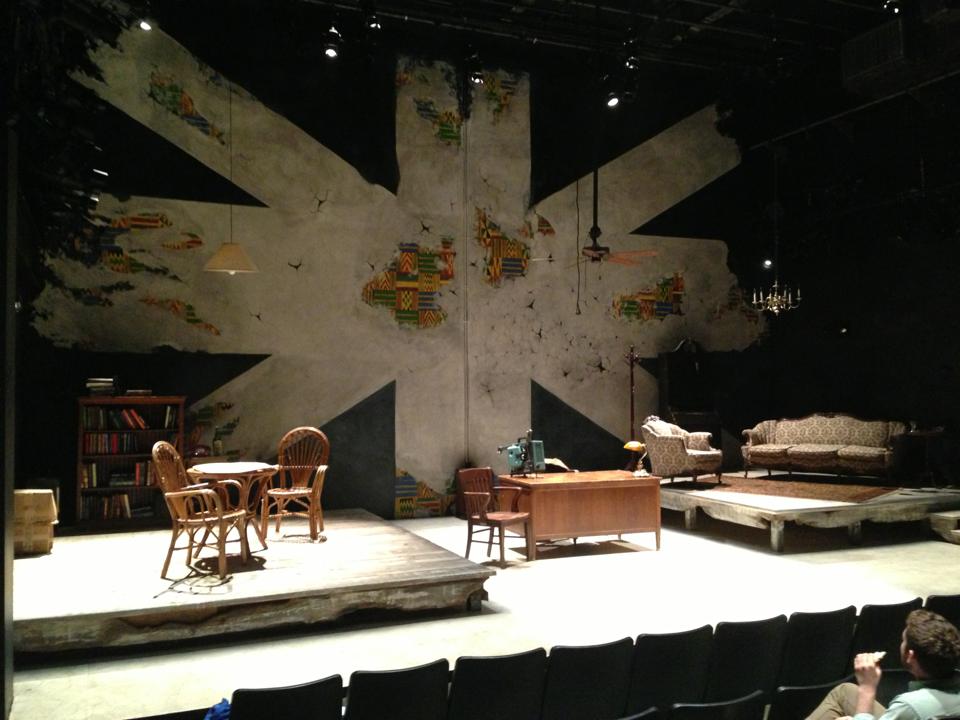 Keen Company Pulls The Film Society Out of the Vault

Politically charged and culturally relevant plays face a significant hurdle on the revival circuit – historical context. Popular social commentary is ever changing and playwrights that take up causes are, in part, dependent upon their audience knowing the historical and cultural backdrop for their message. Therein lies the problem for the Keen Company’s revival of Jon Robin Baitz’s The Film Society. The Film Society, a story of faculty members at a failing all boys prep school in 1970’s South Africa, first debuted in 1988. Nelson Mandela was still in prison. Apartheid was still government policy. International organizations and countries boycotted South African products. South Africa was banned from the Olympics. Even America’s beloved family man Bill Cosby proudly displayed an anti-apartheid sign on his television son’s bedroom door for all to see.

I was two in 1988. My political and global awareness developed in a President Mandela, not prisoner Mandela, world. In fact, it was not until I began studying political science in college and, I am ashamed to admit, not truly until I visited the vibrant and beautiful country of South Africa for the first time this past May, that I began to understand the historical and social significance of apartheid. While my recent experiences made the Keen Company’s production of The Film Society an intriguing historical piece, I am struggling to draw meaning from it as anything but.  Unlike, for example, Joel Grey’s 2011 remarkable revival of Larry Kramer’s The Normal Heart (one of the best productions I have ever seen), The Film Society struggles to escape the confines of the 1980’s world in which it was written.

The Durbin boy’s school that serves as the setting for the play is essentially a microcosm of white society in South Africa during the gradual decline of the white aristocracy. The set design, while simple, is an effective visualization of the plot. A striking focal point, Steven Kemp has transformed the back wall of the black box theatre into a giant Union Jack with bursts of traditional African patterns and color peeking through the worn flag. The main character, Jonathan Balton (portrayed by Euan Morton), is a teacher who is caught up in an ever-changing and politically charged environment – an unwilling participant in tumultuous times who likes nothing more than to escape life’s complications by watching films with his students (although never the ones that he ordered).

Jonathan’s friend Terry (David Barlow) is a fellow teacher and novice political activist propagating social change but, after multiple arrests and with the death of a fellow activist on his conscience, he quickly becomes wary of the implications that his civil disobedience has on fellow activists, his black housekeeper and himself. Headmaster Sutter (Gerry Bamman), a representative of the South African government perhaps, is an artful manipulator trying to maintain the status quo while also realizing that South Africa is changing despite his efforts. He positions young Jonathan to take over the school upon his retirement, an effort helped along by Jonathan’s mother (the delightful Roberta Maxwell) who is a wealthy benefactor of the school, but takes great effort to steer Jonathan away from the radical positions taken by Terry and Terry’s wife Nan (Mandy Siegfried).  Finally, there is assistant headmaster Fox (Richmond Hoxie) who is the juxtaposition to Terry’s outspoken activist – he is a man clinging to the small bit control that he has over the school and is the embodiment of the crumbling (in his case, dying) white power structure in South Africa. Together, these characters grapple with their social roles – with change coming, will they embrace the shifting political climate, will they be destroyed by it, will they lead the charge to hasten it, or will they be a mere observer to it. Sadly, Jonathan seems doomed to be a mere observer who will be destroyed by it.

Jonathan is a frustrating character. He is politically apathetic, ultimately unsupportive of his friends, and a mediocre teacher at best who, despite half-hearted efforts to escape the nepotism that has handed him every opportunity in life, is unable and unwilling to break away from his family’s legacy as upper-class landowners and to earn the authority that is bestowed upon him. At a pinnacle moment, Jonathan is given the opportunity to fire Nan or to keep her on staff and re-hire Terry, who has proven to be the best teacher the school has, despite his radical beliefs. In a misplaced attempt to conquer some control over his life and to wield the authority he consistently shies from, Jonathan selfishly rejects progress and dismisses both Nan and Terry, effectively dooming himself to go down with the sinking school. And sink it will because, unlike in 1988, we know the ending – the ANC won the 1994 presidential elections and Mandela became the first black South African to serve as President.

Despite the dating of the plot and noticeably poor South African accents by cast members (unless South Africans sounded remarkably more British in the 1970s than they do today), the cast succeeded at creating complex and intriguing characters. Euan Morton brilliantly portrays the nonchalant, wise guy Jonathan who appears uncomfortable in his own skin but in a surprisingly haughty way. Morton’s Jonathan is sympathetic despite all of his faults and his culminating monologue about a traumatic childhood experience was delivered with such brooding and a child-like innocence that I empathized with Jonathan despite his deplorable treatment of his friends. David Barlow also shined among a strong cast.  Barlow’s Terry deteriorates before our eyes from a charming and self-assured beacon for social change into a paranoid and emotional mess as he discovers that championing a cause can have life-altering consequences. Barlow’s emotional outbursts are uninhibited and, in one scene where Terry is forced to play the role of a rich, white landowner in an attempt to get his black housekeeper released from jail, Terry’s self-hate and doubt is palpable.

Ultimately, the Keen Company has staged a great production of The Film Society. It is just untimely. There is no doubt that racial disparities remain in South Africa and there is still considerable progress to make; however, The Film Society is less about racial inequality and more about South Africa’s political transition. That being said, does anyone have a DeLorean I could borrow? I’d like to make a trip to 1988.

The Film Society runs through October 26 at the Clurman Theatre on Theatre Row.