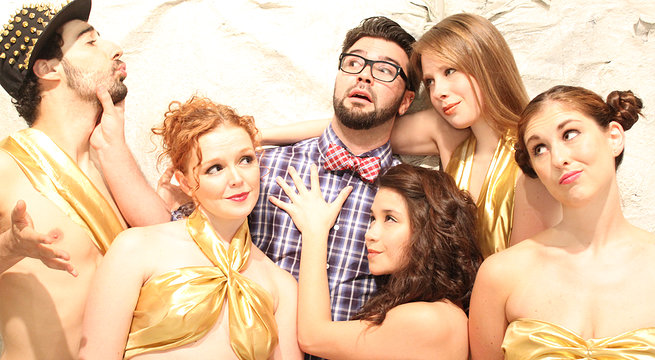 I cannot help but think that Nina Mansfield conceived of Gymnos: A Geek’s Tragedy while hobbling along on an elliptical machine in an over-crowded gym. Do not get me wrong, I am 100% behind my illusionary version of Ms. Mansfield – gyms suck. Gyms are terrible. Whoever thought that communal exercise was a good idea* must have had the body of a Greek god.** Gyms are breeding grounds for judgment, a pedestal for vanity, and, for many of us, a pit we chuck money into on a monthly basis just so that we can say half a dozen times a year that we “hit the gym this morning.”*** I did precisely zero exercise the day that I went to see Ticket2Eternity’s production of Gymnos at HERE – an off off-Broadway production space specializing in innovative theatre. After sitting through Gymnos I felt justified in skipping my half-marathon training because I had been through the work-out ringer and was exhausted, but not in a fulfilled sort of way.

Gymnos is the story of a playwright with a serious case of writers block who is facing an approaching play submission deadline. He is joined by a Greek Chorus that manipulates him into going to a gym for inspiration. Why the gym? That is not precisely clear, although his muse is a lovely actress from his last failed play, and he sees the merit in toning his abs in order to impress her. His journey through the gym membership process plays out like an extended Planet Fitness commercial. The employees at the first gym laugh at him, the employees at the second gym have a draconian membership process (and may be vampires . . . or cannibals?) and the third gym WAS JUST RIGHT. Except it’s not. It is filled with self-defined “zany” characters who are horrifying caricatures of the types of people that you might see at the gym. There is the guy obsessed with the gym towels, the recognizable athlete/celebrity, the red-bull guzzling and protein powder chugging brute, the annoying yoga valley girls, the military-like cycling instructor, the “actor” moonlighting as a personal trainer, and the overly enthusiastic dance-workout instructor. In the end, our playwright hero survives his workout, fails to get the girl (she is dating a personal trainer, naturally), sports some serious bench press-related injuries and writes a play based upon his experiences.

In case the audience did not catch the parallels between our playwright’s journey and themes commonly found in classical Greek mythology (or any heroic tale, really), the playwright ended the show with a summary so that no one in the audience would be confused as to which “zany” characters embodied each theme. The summary is actually quite helpful because there are a lot of characters – too many characters. I have no doubt that there are some talented actors in the ensemble, but there were too many people with too little to do on stage for anyone to really shine, with a few notable exceptions. Alexander Stine was absolutely hilarious as the guy obsessed with taking workout supplements. He delivered his lines with perfect timing and boundless energy, and he integrated some great physical comedy into the role. Chorus members Megan Magee and Carlos Neto also successfully developed characters with entertaining and nuanced personalities.

HERE is actually a very good space for experimental theatre, but the bloated cast size made the theatre appear remarkably small. Carlos Neto did a nice job as choreographer given the constraints of the set and the size of the cast. The hip-hop inspired dance moves were appropriate for the show, although several cast members were struggling to keep up. Perhaps they were distracted by the costumes. A cheesy mix of white and gold, the costumes were well-suited for an early 1990’s music video. Don’t believe me? One Chorus member wore gold lamé MC Hammer pants. Some fashion choices should never be revived.

Ultimately, although Gymnos had a few fun scenes and a couple of memorable lines, the show is neither thought-provoking nor all that original. Perhaps the playwright should seek out a different Muse.

*That would be the Greeks.

**Okay, maybe just one that passes as an aesthetic tribute to them.

***I never say this. I am the only person in New York without a gym membership. I run outside where there is air and the only hurdles I have to dodge are tourists.