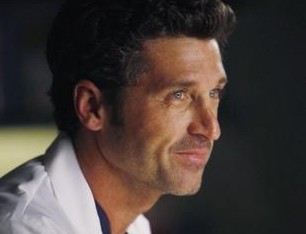 Grey’s Anatomy “Map of You”

I’m curious, does anyone know where I could get an application to become Derek Shepherd’s wife? I’ll even settle for Patrick Dempsey, so long as he’s as incredible a husband as his doctor counterpart.

In the most recent episode of Grey’s, “Map of You” the most attractive doctors on television made progressive relationship moves. Alex, after having his father (played by television über father James Remar) come back into his life, makes new girlfriend Jo think he’s moved on already. After spending one too many late nights at the bar where his father plays guitar, Alex finally speaks and plays (not so ear pleasing) music with Jimmy, only to find out that he’s got another family that he’s abandoned. To keep the streak of hitting his father every 18 years, Alex clocks Jimmy and the face, and we get an indication that maybe Jimmy finally realizes who Alex is.

Alex is too wrapped up in father drama to notice that all the interns are now second year residents which is hilarious because when did they take their intern exams exactly and also who would trust them to be their doctors? Only Webber, and only after a lot of convincing. Shane gave up working with Derek Shepherd in this episode; clearly he’s not a smart guy. The rest of them are all dating or trying to date their bosses which is only appropriate in television land. Seriously, this myth that all doctors are also super pretty did not prepare me properly for my job at a hospital.

Last episode, Christina told Meredith she isn’t as good a doctor anymore because she has other commitments, and this episode, Meredith fires back by saying that Christina doesn’t have time for people whose interests differ from hers. Fair assessment, seeing as that’s why she and Hunt are no longer together. She’s also recently taken an interest in Shane as a doctor because he is also a “shark” for surgeries, and has history-making surgical ideas. I’ve never doubted that Meredith and Christina could overcome any fights they may have, but with the knowledge that Sandra Oh is leaving after this season, I’m worried we might have to see this fight ride out into the end. If we’re lucky, and Christina doesn’t die like every other beloved character (seriously, it’s only fan favourites that actually die, the others just never come back) we might be unlucky that Christina and Meredith leave on a sour note. Christina will probably realize she’s too big for Seattle and go on to win some Harper Avery’s in surgeries that have yet to be performed in the real world, while leaving her life and relationships behind.

At least Meredith will still have Derek, and thank goodness she does because that man is a saint in a model’s body. He loves being a hot-shot neurosurgeon, but he loves his wife and family more, so now Dr. McDreamy will spend less time performing surgeries, and more time with his kids and on research so his wife can become a better version of her mother.

My sister, Krystyn’s review of the episode: “It was good one.”