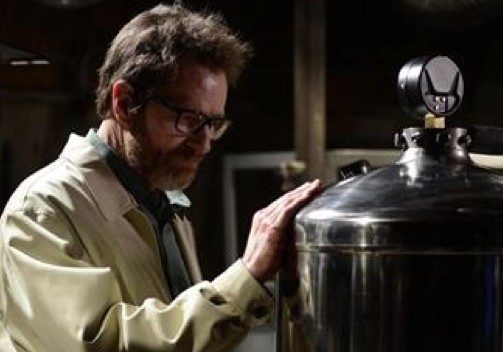 Breaking Bad, In the End

With most shows, viewers spend countless hours discussing possible endings for the series. With Breaking Bad, however, there were certain truths that had to happen and most of us were able to sit back and let Vince Gilligan and his crew lead us to salvation. As writer and director of the final show, “Felina,” Gilligan blended his on-the-mark storytelling with the show’s masterful cinematography to create a definitive ending to one of the greatest shows on television. Rather than diagnose the camera angles of Walter’s last scene with Skyler, discuss the mechanics of Walter’s automatic blunderbuss, or ponder on how long Yule sat in arrogance within the walls of the safe house, it would seem that the best way to tie up the series would be by letting Vince Gilligan confess his methods and mindset about the show:

“We didn’t feel an absolute need for Walt to expire at the end of the show. Our gut told us it was right. As the writers and I worked through all these different possibilities, it felt right, but I don’t think it was a necessity for us. There was a version we kicked around where Walt is the only one who survives, and he’s standing among the wreckage and his whole family is destroyed. That would be a very powerful ending but very much a kick-in-the-teeth kind of ending for the viewers. We talked about a version where Jesse kills Walt. We talked about a version where Walt more or less gets away with it. There’s no right or wrong way to do this job — it’s just a matter of: You get as many smart people around you as possible in the writers room, and I was very lucky to have that. And when our gut told us we had it, we wrote it, and I guess our gut told us that it would feel satisfying for Walt to at least begin to make amends for his life and for all the sadness and misery wrought upon his family and his friends.”

Gilligan continues, “Walt is never going to redeem himself. He’s just too far down the road to damnation. But at least he takes a few steps along that path. And I think more importantly for him than that is the fact that he accomplishes what he set out to accomplish way back in the first episode: He leaves his family just a ton of money.  Of course, Walt for years now has been looking through the wrong end of the telescope. He thought, if he makes his family financially sound—that’s really all he has to do as a man, as a provider, and as a father. They’re going to walk away with just shy of 10 million in cash, because of Walt’s machinations with Gretchen (Jessica Hecht) and Elliott (Adam Godley). But on the other hand, the family emotionally is scarred forever. So it’s a real mixed message at the end. Walt has failed on so many levels, but he has managed to do the one thing he set out to do, which is a victory. He has managed to make his family financially sound in his absence, and that was really the only thing he set out to do in that first episode. So, mission accomplished.”

In this interview with Entertainment Weekly, Gilligan manages to satisfy the majority of viewers while still hitting strides with smaller groups of cynical viewers. “We talked about Jesse taking Walt up on his offer to kill him or Walt turning around to find Jesse had a gun on him. We talked about every permutation we could conceive of, and we went the way we went ultimately because the bloodlust had been satiated prior to that moment by seeing Jesse throttle Todd (Jesse Plemons) to death.” Ultimately, it was thrilling to see Jesse murder Todd with the very chains that Todd put him in. Much like the opening scene to No Country for Old Men, Jesse strangled Todd with handcuff chains, but eventually chose to let Mr. White live, even though Walter asked Jesse to kill him. In a Shakespearean sort of way, it may have been crueler to let Walter live, but it speaks more about the character of Jesse to leave his criminal persona with the evil yet naïve Todd, who became one of the cruelest characters on the show. While some viewers feel Jesse may have gotten caught while fleeing the scene of the crime, more optimistic viewers will remember that Badger had heard he was in Alaska, so it’s possible that this may have been a dream of Jesse’s—to get away from his upbringings and create handcrafted wooden pieces in the snow-covered state.

In the end, viewers got to see Walt die on the floor of a meth lab—the same one that Jesse had kept to Mr. White’s immaculate standards while serving as a prisoner to Todd’s crew. As the camera spirals upward and viewers see an overhead shot of Walter lying on the floor as police officers fill the room, we are left to wonder whether Walter actually did get away with everything, which was the original question of the show. “Dying is not necessarily paying for one’s sins,” admits Gilligan. “I certainly hope it’s not, because the nicest people that have ever lived are going to die eventually. So it could be argued instead that he did get away with it because he never got the cuffs put on him. But he’s expired before the cops show up. They’re rolling in with the sirens going and the lights flashing and he just doesn’t give a damn. He’s patting his Precious, in Lord of the Rings terms. He’s with the thing he seems to love the most in the world, which is his work and his meth lab and he just doesn’t care about being caught because he knows he’s on the way out. So it could be argued that he pays for his sins at the end or it could just as easily be argued that he gets away with it.”