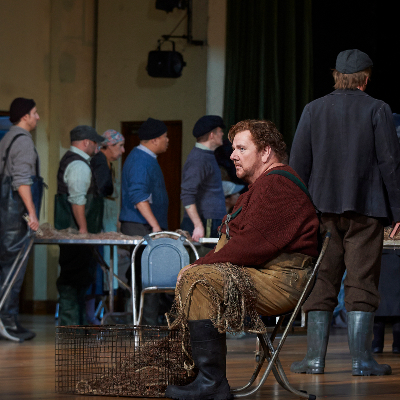 At the COC: Peter Grimes

I find opera very hard to connect to most of the time. The outrageous plots, the technicality of the music, the stiffness of the acting, the surtitles- it all works out to a medium that rarely holds my attention the way I want it to. That’s why Peter Grimes is proving such a refreshing change of pace for the COC. Sung in English, I understood at least half of the lyrics (fear of enunciation is the principal affliction of opera culture), thereby freeing me up to do important things like observe chemistry and facial expressions. I was glad for the extra space to observe those things closely for two reasons: a) leading man Ben Heppner is, beyond just a beautiful tenor, a fairly good actor; b) Peter Grimes is actually an interesting story, far more subtle, modern and intricate than most other operas combined. These things, along with humanizing supporting turns from Alan Held, Jill Grove and the beautiful Ileana Montalbetti, help the audience to do the unthinkable- relate in some way to an opera’s titular tragedian.

Ace conductor Johannes Debus returns to lead the COC’s top-notch orchestra through Benjamin Britten’s modern-but-not-all-that-modern score while director Neil Armfield constructs an excellently petty and torturous tone with game-winning assists from Ralph Myers’ brilliantly dismal town hall set and the COC’s fabulous chorus and supporting players (Claire de Sevigne and Danielle MacMillan are particularly effective as the heinous town prettygirls).  I would have liked more commitment to enunciation across the board and some judicious cutting when it comes to Britten’s crazy-long interludes that leave the audience starring at what is essentially really really long scene transitions, but Peter Grimes is still one of the most affecting dramas to come from the COC in a long time (in terms of emotional stakes that really resonate, it’s up there alone with Dialogues des Carmelites).

Heppner plays the misunderstood titular fisherman with both vanity-free gruffness and immense pathos. His Act I a cappella duet with Montalbetti’s Ellen Orford is the most beautiful operatic moment I’ve ever see; it’s as if their characters are inseparably tuned in to one another. Once, Heppner’s voice even cracked in one of Peter’s most emotional scenes. Now, the opera snob among you is free to believe that that’s unacceptable, that the great Canadian tenor was coming off a sickness and just screwed up in that moment, tainting his whole performance. But I saw it as an indication of Heppner’s dedication to Peter’s journey. I don’t need, or even want, technical perfection if I can have emotional honesty instead, and in that moment, feeling as he feels and telling the story he is telling, Peter Grimes is far more likely to fumble than soar. A performer willing to show that is what I’ve been wanting the COC to show me for years- someone who is not just a singer.