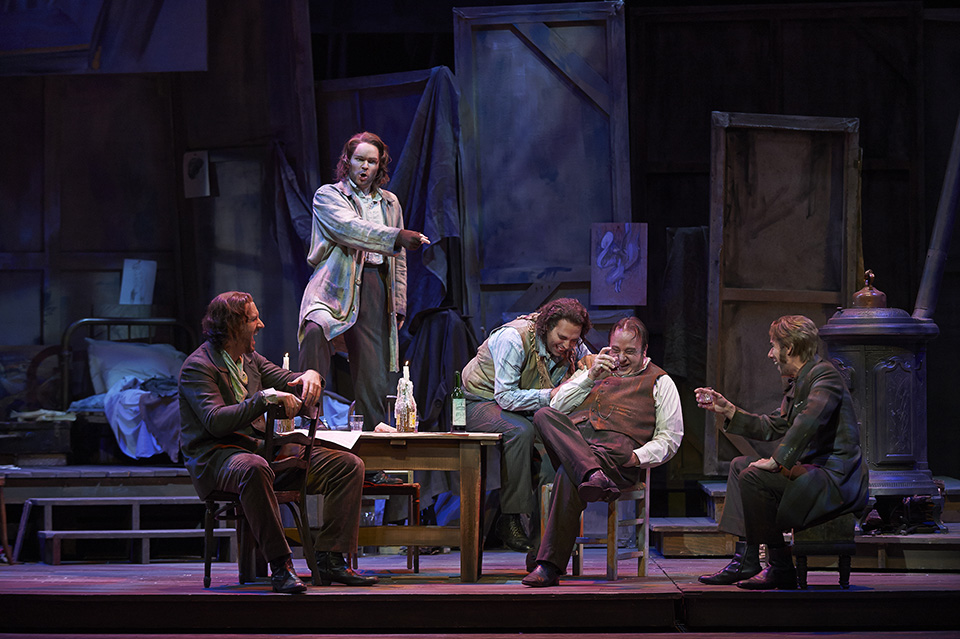 At the COC: La Bohème

The Canadian Opera Company is kicking off their 2013/14 season with a really smart choice. Puccini’s La Bohème is among the world’s most famous operas but it’s also one of its more entertaining. Far from the unrelenting doom and gloom of every other example I can think of (except Gianni Schicchi, that one is a Hoot), La Bohème only Ends with exaggerated wailing and predictable tragedy, the rest of it is romantic intrigue and male bonding hijinks (so to speak). The COC singers are always splendid and the acting generally broad and/or non-existent, so I won’t harp on either of those facts again beyond praising the gorgeous tenor of Dimitri Pittas (Rodolfo) and shaking my fist at the company’s complete inability to convey anything with any subtlety of performance. Where they do succeed in their beyond-vocal performances is in the development of the camaraderie between the roommates. Colline (Christian Van Horne) and Shaunard (Phillip Addis), in particular, bring a lively realism to the central friendships that carries them through the very little they have to do plot-wise (does anyone else wish Colline and Shaunard would just make like Collins and Angel and run away with a show-stealing romantic subplot? Just me?). Pittas sells his side of the opera’s central romance well, bringing real tenderness to his interactions with Grazia Doronzio’s Mimi, but Doronzio never felt quite right in her role. Her illness doesn’t come across clearly enough until she’s about three minutes before death and the character’s unique naiveté loses all its melancholy desperation in her too-precious hands. Joyce El-Khoury fares better as a playful Musetta (though clad obnoxiously in Pepto-Bismol pink; the costumes are all slightly left of the mark). She’s slyly silly at her introduction yet reveals great humanity in the final act, though I would have liked her chemistry with Joshua Hopkins’ Marcello a bit stronger (it’s kind of important to the story, and it’s kind of not there at all at the moment). Director John Caird outlines an awesome idea in his Director’s Note wherein the characters (a painter, a poet, a composer and a philosopher) become the storytellers through whom we’re experiencing La Bohème. Said awesome idea only really manifests itself in the production in David Farley’s excellent set (all made of canvases as though painted into existence by Marcello) and I would have liked for it to be taken further (Schaunard emerging from the pit or breaking the fourth wall and conducting sections of the score from the stage; Rodolfo the poet writing the story of his own tragic love affair as we see it play out, etc). Instead what we get is a La Bohème that hints at excellent invention but merely scrapes the surface of the piece’s possibilities… which is not to say that it’s not still a fabulously entertaining night at the opera.