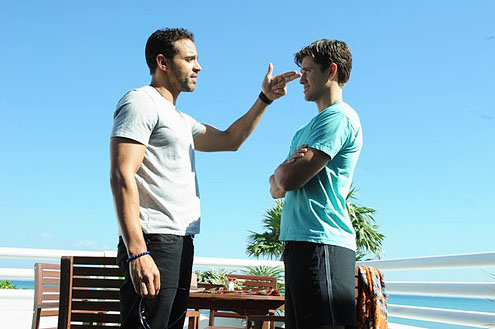 Graceland’s season finale, “Pawn” was a mostly satisfying end to a strong freshman season. Despite moments when you want to rip your hair out in frustration, “Pawn” succeeded in tying up a lot of loose ends, and season long arcs, while setting up some brilliant conflicts for next season, which has thankfully been confirmed.

“Pawn” picked up right where last week’s “Happy Ending’s” left off. It seemed like the truth about Briggs was out, and he would be held accountable for everything he’s done since the beginning of the season. Of course he got away, and the remaining residents of Graceland were left to face the consequences. In one of the finale’s only light-hearted scenes, there was a montage of the characters’ reactions to finding out all the secrets everyone has been keeping. Then they were at each other’s throats. (Remember at the beginning of the season? When they all got along, and hung out at the beach and Mike was new and innocent, and Briggs wasn’t a murderer? Good times.)

The entire season had been building up to watching the relationships explode in “Pawn”. It was interesting to see who fought with who, and who took whose side. The cast has had reliable chemistry this season, but most of their relationships consisted of bantering while working cases. The cast portrayed a strong, believable chemistry of people who care about each other even though they’re fighting. It was great to see everyone have a chance to explore different dynamics with each other, and especially see some of the underutilized cast members (especially Brandon Jay McLaren as Jakes) be given a chance to shine.

I’m curious to see how they deal with the fallout from all these revelations next season. The last time the group was all together, they seemed to be okay with each other. But there was too much drama, and too many lies that surfaced for there not to be consequences.

One thing that rang false was how both Briggs and Mike were welcomed back into the fold. It made for a nice scene of closure for the group, but given the strong reactions to Mike’s investigation, it seemed unrealistic.  It seemed like a very Mike vs. Briggs situation- that if Briggs wasn’t guilty of anything, then Mike was the bad guy for being a part of the investigation against him. Briggs was cleared of all charges, but no one seemed upset with Mike anymore.

Maybe everyone got along because they just had some traumatic bonding experiences, and Mike was leaving for DC, so they kept it together. But just because they were friendly when they sent Mike off doesn’t mean they’ll be happy to see him come back, or trust him again. It was nice having everyone being friends again, but there also need to be some sort of consequences for everything that’s happened.

That’s actually the great and terrible thing about Graceland: it’s set up so you can’t get everything you want. Briggs should be punished. It was infuriating watching the characters apologize to him for doubting him, because they were right. He was doing some shady stuff. Briggs’s backstory does garner sympathy- if it can be believed. He’s a skilled liar, and already admitted to Mike he wasn’t entirely truthful about his history. And even if now we have the whole truth of his history, tragic backstories aren’t a get out of jail free card that allow you to deal drugs, betray your friends and murder people. So as satisfying as the reconciliation between the Gracelanders was, it’s fleeting. It won’t last, because it can’t.

Similarly, Mike’s happy ending will come crashing down as well. It’s a shame, because he earned that over the course of the season, just by the sheer amount of terrible things that kept happening to him. I want Mike to be happy, but I also would like Mike to stay on the show, which he can’t do if Mike keeps his dream job in Washington DC.

Unfortunately for Mike, it looks like he’s going to be dragged back to Graceland, after Briggs confessed something that the audience won’t discover until next season. Even if he wasn’t confessing some dark secret, some evidence of his misdeeds is resurfacing. It’s unknown whether Mike will be sent back to Graceland as a resident, or if he will be sent back in some other capacity, but he’ll be back.

“Pawn” did a great job of setting up conflicts for season 2, but only an okay job of solving some of the season long problems. The investigation against Briggs is closed –for now. Jangles, a sadistic assassin, who Briggs had a personal vendetta against, made a formidable villain this season, but the resolution to the his storyline felt a little rushed. Jangles has been close to Charlie for weeks and Briggs had been chasing him for years. The set up was there, but the resolution felt rushed. There wasn’t an imminent sense of danger for most of the episode. It was only until after Briggs and Charlie were taken that things seemed serious. Before that, Jangles seemed like an afterthought- a loose end that needed to be tied up so the show can proceed to the next thing.

The drama between the housemates, and the investigation on Briggs is good material, but those things are still open-ended and can (and probably will) be revisited. It would be forgivable to focus on those elements, but they came the expense of rushing other storylines. There simply wasn’t enough time to devote to everything, and the result was the episode felt unbalanced. It was overall a decent episode, but a great lead in for next season. (What do you mean I have to wait until next summer for new episodes?)

Episode Grade: B
Season Grade: A+