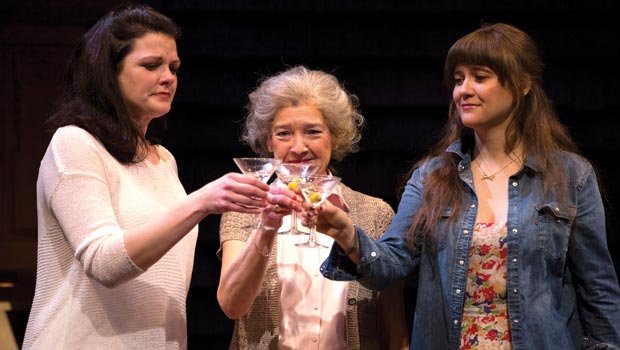 It’s hard to forget a company like the Huntington Theatre Company in Boston. It surprises audiences continuously with its award-winning seasons. Their late spring production of Rapture, Blister, Burn was no exception. Peter DuBois led a charming cast of talent in this biting new comedy by Gina Gionfriddo. While Gionfriddo is not a household name, she should be on every theatre-goers’ list. This play was a 2013 Pulitzer Prize finalist, and no surprise. The comedy centers around the awkward time when one wonders, “Where am I now, and what have I left behind?” Sidled with guilt and doubt about one’s choices, one is left with the burden of re-identifying oneself while re-affirming one’s life decisions. This philosophical and introspective discussion is a lot more fun on-stage, thanks to the wonderful cast and script, I promise.

Gionfriddo’s play also centers around the ideals of feminism. I couldn’t tell you which “wave” of feminism we are approaching or leaving, but I can tell you that Gionfriddo has a way of discussing some emerging themes and ideas without being preaching. The play may be a little too “heavy” for some people, but I prefer to call it “smart” theatre. Not that one needs to be smart to see or enjoy it, but, rather, that the play encourages us to be active audience members by questioning and engaging with the material. I heard many audience members discussing the play in heated whispers during intermission and post-show.

At the center of the play, Catherine Croll, played with the perfect mix of youth and stuffy professor/writer by Kate Shindle, returns to her hometown in New England following her mother’s heart attack. This return sparks the reignited passion between Catherine and her once-abandoned ex-boyfriend, Don Harper, played by Timothy John Smith. The dramatic all-too-common twist? Don’s married to Gwen Harper, played by Annie McNamara, and coincidentally also Catherine’s old friend and roommate. And while Catherine has a rude awakening of her own with her feelings for Don, Gwen has her own epiphany upon Catherine’s return. In fact, the characters soon realize that they want to exchange lives.

While this plot might sound like Freaky Friday without the magical realism, I promise that Gionfriddo keeps it fresh. The strongest parts, in fact, is not the evolving love-triangle, but the academic and social intergenerational bond that forms in Catherine’s mother’s living room. Catherine attempts to teach a class through the local college, but only two students sign up: Gwen (surprise, surprise!), and a smart-aleck and witty Avery Willard, played with an excellent range and sense of timing by Shannon Esper. The conversations among these three women, along with Catherine’s mother, Alice Croll, played by the unbeatable and show-stealing Nancy E. Carroll, drive the show to its strongest moments. Gionfriddo creates an academic discourse on feminism and the modern world through these women’s thoughts and conflict. The true praise belongs to DuBois and his directorial ability to navigate this material with an ear for character and an eye for conflict. The tension among these women builds perfectly and the actors never lose focus for driving forward the conflict underneath their lofty ideals. Because at the heart of this play is understanding; the desire and urge to understand our own choices as we compare them with others. And the Huntington brings out this story beautifully.

Oddly, I didn’t care for Smith, playing the only male character. While I found McNamara’s character a confusing mess, McNamara instilled so much sincerity and conviction into her choices that I wanted desperately to approve of and like her. Except I just couldn’t care about the relationship among these three friends. I reached a point when I didn’t care who ended up with whom (though a surprise twist of Catherin and Gwen being lovers would have made for a fun exploration of human sexuality). If anything, this production was held back by sex and sexuality. When gender was removed from its sexual component, the actors shone. I’m still not clear whether this “fault” lies with the playwright or the actors. Regardless, this play is too much fun with a mix of poignancy, comedy, and heart. I would be remiss without acknowledging the outstanding and impressive scenic design by Alexander Dodge; I had to check for the scenic designer’s name and credentials during the first switch from Gwen and Don’s house to Alice and Catherine’s home because the set was just that impressive. With seamless transitions and beautiful use of space, angles, and color, Dodge’s set is a masterpiece and showcase of theatrical craftsmanship and design.

Rapture, Blister, Burn is not a typical show on your “to-see” list, but I admire and respect the Huntington Theatre Company for its continued emphasis on educating Boston theatre audiences on new and innovative theatre. The Huntington Theatre Company boasts one of the most impressive upcoming seasons in Boston, including, Mary Zimmerman’s original adaptation of Jungle Book (you may remember my glowing review of her revival of Candide at the Huntington); thought-provoking The Power of Duff by Stephen Belber; The Cocktail Hour by the American classic playwright A.R. Gurney; the sexy and hilarious Venus in Fur by master of comedy David Ives; The Seagull by Russian jack-of-all-trades Anton Chekhov; the original play Becoming Cuba by Playwright-in-Residence Melinda Lopez (you may remember her from Huntington’s Our Town); and the original play Smart People by the other Playwright-in-Residence Lydia Diamond. With this much challenging and engaging theatre, and coming off another impressive season with a 2013 Regional Theatre Tony Award, it’s no surprise that the Huntington Theatre Company is a dynamic staple of the Boston theatre world.