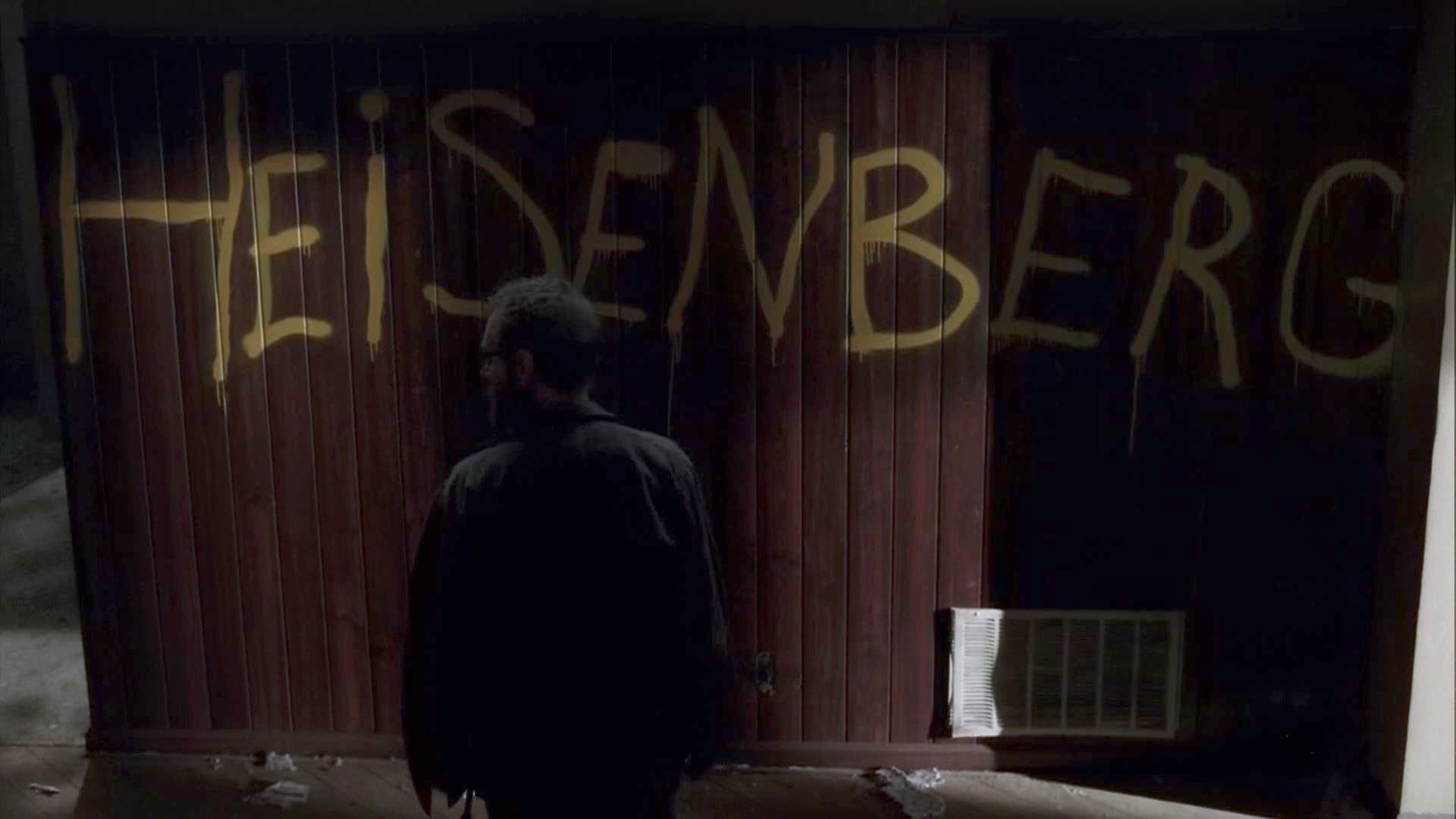 Directed by Bryan Cranston, “Blood Money” began much like the first episode of the first half of season five, “Live Free or Die,” which showcased Walter White’s lonesome Denny’s birthday. Set approximately one year in the future, our loveable anti-hero—with hair—visits his abandoned former home to find a few local kids playing Lords of Dogtown in the drained pool. Inside the house, the name “Heisenberg” has been spray-painted across the wall of the abandoned—possibly police invaded—home, along with additional graffiti. Moving through his former domestic dwelling, Walter enters his bedroom and retrieves the hidden ricin (white powder) that he stored behind the electrical outlet. When exiting the home, his former neighbor sees him and literally drops her groceries in fear. Whatever happens between present and future, it’s clear that Walter’s notorious lifestyle is no longer private.

Roll opening credits and we’re back to seconds after the end of episode eight, “Gliding Over All,” which ended with Hank finding Walter’s book that contains a note from Gustavo “Gus” Fring. Quickly excusing himself from the most pleasant evening the White/Schrader families have ever had, Hank steals the book and begins to head home with his wife (who ironically remarks, “You’re the devil” to Walter about an off-screen joke). On the Schrader’s short journey home, Hank turns Hulk and his rage/confusion causes him to wreck into a neighbor’s white picket fence. Remaining relatively secret, Hank visits the hospital but asks Marie to keep quiet about the incident, specifically telling her not to tell the Whites what happened.

Since Walter agreed to get out of the game in episode eight, he has returned to work full-time with Skyler at the family carwash. No longer forced to make true life-or-death decisions, Walter is left to debate air freshener placement with his wife/business partner:  “Does bubble gum belong near ocean spray?” he rhetorically asks before recommending that the duo open a second location. Hesitant, Skyler is still growing on the idea of trusting her husband and agrees to think about the proposal to help speed up the launder process for the pile of money in storage. Meanwhile, Lydia Rodarte-Quayle (Madrigal Electromotive attorney from Houston) arrives in a rental car—posing as an A-1 customer—to speak with Walt. Keeping up his agreement with his wife, he politely declines and tells her to, “Have an A-1 Day.” Skyler confronts Walt and then not-so-politely tells Lydia to leave and never return.

Hank matches the writing in Walter’s Leaves of Grass with Gus’ notebook and then begins to work from home, spending every waking hour reviewing the Gus Fring case. As Hank looks through boxes of photos, fans are reunited with every casualty involved with Gus from the previous seasons like a victim slideshow. The idea of Walter being “W.W.” (a.k.a. Heisenberg) continues to build in Hank’s mind as he watches a robbery video from season one and finds the infamous Heisenberg sketch of a man in a hat and sunglasses with a mustache. Hank continues to live on the edge of furious and sickness, thinking that someone so close to him could be such a “monster.”

Meanwhile, Jesse Pinkman has taken residence on rock bottom. Back with his former stoner friends Skinny Pete and Badger(from early seasons of the series), he sits on his futon surrounded by bong smoke and trivial conversation. During Badger’s monologue (which already has an animated video), he pitches an idea for an episode of Star Trek, which involves a pie-eating contest between Spock, Chekov and Kirk. Bored with his friends and overwritten with guilt from the past, Jesse gathers the money Walter gave him in the first half of season five and leaves to visit his lawyer, Saul Goodman. Not receiving attention from Saul’s secretary, Jesse lights up a joint in the waiting room while propping his feet on the two black bags of money—around five million. A strung-out Jesse talks to a freshly-massaged Saul about giving the money to the parents of Drew Sharpe (the child murdered at the train robbery) and Mike’s granddaughter, Kaylee Ehrmantraut. “Better call Saul” calls Walt for assistance on the matter.

Walter wakes up a passed-out Jesse when returning the “Blood Money.”  During their conversation, it’s clear that—although the two have lived most of the same stories—Jesse is taking the weight of the past much harder than Walter (this revelation first came about when Jesse decided to quit and Walter was whistling while cooking meth, moments after the missing boy appeared on television). Jesse’s main concerns seem to be for the dead boy and Mike’s granddaughter, because he believes Walter killed Mike—which is true. Walter continues to deny Mike’s death and tries to comfort Jesse by saying, “But son, you need to stop focusing on the darkness behind you. The past is the past.” Jesse continues to calmly disagree with Mr. White but he finally gives in, at least for the moment. Walter, as if trying to convince himself Mike’s murder didn’t exist, repeats the phrase: “I need you to believe me—about Mike.” Later in the episode, Jesse gives a stack of money to a homeless man before driving to a shady part of town to toss out stacks of money like a paperboy, trying to dissolve the evil deeds from his conscience.

Sick again from new treatments of chemo, Walter discovers the book is missing while feeling queasy in the bathroom floor. This eventually leads to Walter finding a tracking device on the bottom of his vehicle. Walter recognizes this as the same type of device the DEA used to track Gus. The following day, Hank is startled with Walter shows up to see him. After a quick and meaningless conversation, Walter turns back and bluntly confronts Hank about the tracking device. While most shows would allow this tension to build, Breaking Bad continues to do the unexpected as Hank closes the garage door and takes a swing at Walter, knocking his brother-in-law to the ground. Hank forcefully describes all of Heisenberg’s evil doings (bombing a nursing home, killing witnesses, etc.), but Walter denies and reveals that his cancer has returned. Hank retorts, “Rot, you son of a bitch.” During their conversation, it’s clear that Walter stands for family but Hank stands for justice. In the final moments, Hank stops his accusations and steps back to reveal, “I don’t even know who I’m talking to…” In true Heisenberg genius, Walter replies, “If that’s true…maybe your best course would be to tread lightly.”