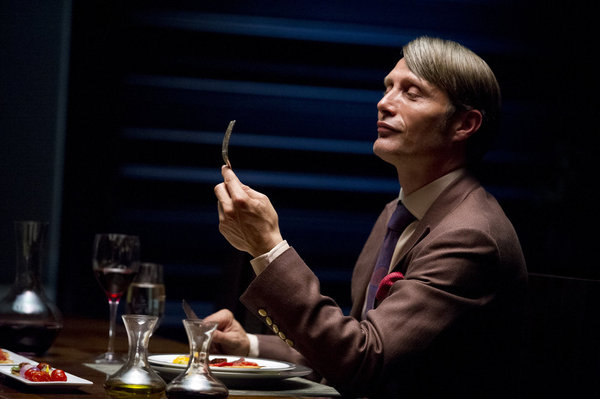 Bryan Fuller has a history of creating visually stunning shows with a unique take on death. Hannibal is the latest in this tradition, though it is much darker than his previous work (Dead Like Me, Wonderfalls, and my personal favorite, Pushing Daisies). It’s unlike any other show on TV right now, and for those who can handle the gore, it’swell worth watching.

At the center of the show, is Will Graham (Hugh Dancy) and of course, the titular Hannibal Lecter (Mads Mikkelsen). Their relationship drives most of the show, but the characters individually are also fascinating.

Will is an FBI criminal profiler gifted (or cursed) with pure empathy. His ability to assume any point of view makes him excellent at catching killers, but takes a toll on him emotionally and mentally. So he is sent to talk to Hannibal, brilliant psychiatrist day, cannibalistic serial killer by night. Will opens up to Hannibal, and Hannibal in turns pushes and manipulates Will for kicks and giggles.

While Dancy gives an incredibly sympathetic performance, Mikkelsen deserves extra praise for tackling a character as infamous as Hannibal. Anthony Hopkins of course won an Oscar for his Hannibal in Silence of the Lambs, and following that iconic performance is a difficult feat, but Mikkelsen does it, and does it well. His Hannibal is charismatic yet cold. I can almost see how a bunch of FBI agents trust him. Almost. I mean, his name rhymes with cannibal. He makes so many bad jokes about the food he’s serving you. (It’s people. You are eating people.) I guess they’re blinded by his sophisticated charm, but still, you’re in the FBI. Get it together.

Will is excused for missing the fact his psychiatrist is a murderer, because he has an inflammation in his brain that is causing him to go slowly insane. A condition not helped by Hannibal killing Will’s doctor and purposefully aggravating his downward spiral. On the one hand, I really want Will to get proper medical attention, and to just to live happily ever after with his dogs. On the other hand, watching Hannibal manipulate him is like watching a maestro at a concert, or a prima ballerina during a show, or a master chef in the kitchen. Oh wait…

There are actually a lot of culinary scenes that are like a Food Network show gone terribly, terribly wrong. The most interesting visual aspect of the show however is the representation of Will’s mental state. I have never seen a show that delves this deeply into a main character’s mind, and it’s fascinating. The bright colors and startling images that accompany Will’s hallucinations sometimes make Hannibal seem like an artsy film. At other times, the visions are so realistic, it’s hard to separate fact and fantasy, drawing the viewer into the instability Will feels.

Without giving any spoilers, the season finale was a big game changer. Hannibal  is very good at pushing its limits and its characters to new, uncomfortable places. It was a fitting conclusion for a strong first season, and set up a second season that promises to be just as challenging.

Additional thoughts: Apparently all of Bryan Fuller’s shows exist in the same “Fullerverse”. I’m still trying to wrap my head around this. If Hannibal and Pushing Daisies ever crossed, the result would be something like Sweeney Todd.