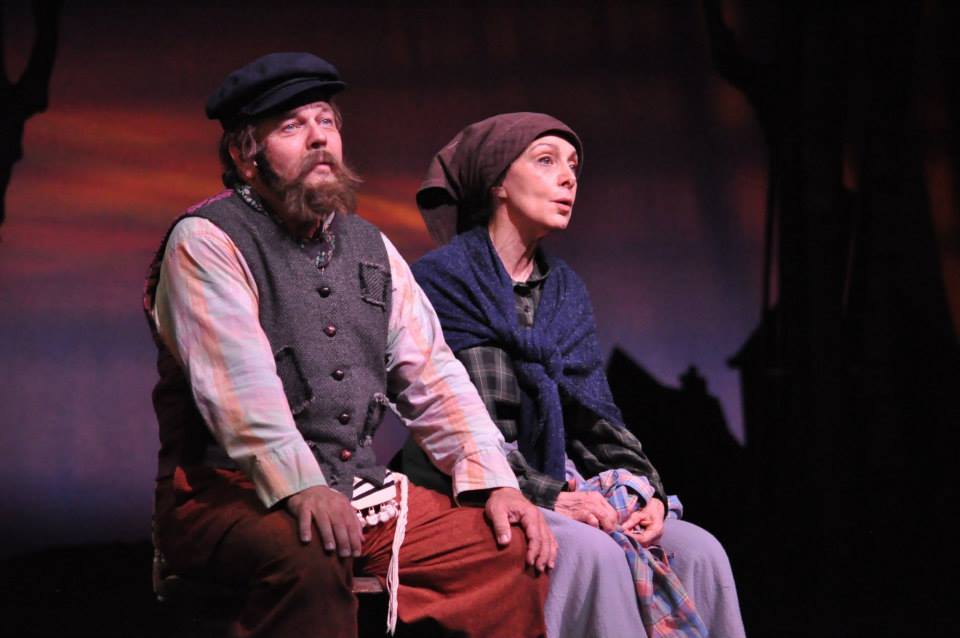 Reagle Music Theatre of Greater Boston presents their Fiddler on the Roof, billing the production as “Scott Wahle in Fiddler on the Roof”. Wahle does an adequate job in the iconic role of Tevye, a Jewish milkman in the poor town of Anatevka. However, the real heart of the production comes in the surprises from some of the supporting stars. Despite these strong efforts, Reagle struggles to develop the spirit of a traditional production of Fiddler bogged down by ineffective director choices.

The opening scene falls flat for me; while Wahle as Tevye has the stage presence, charisma, and star quality to demand our attention, he never boasts the right mix of idealism and love. Worst yet, I never feel like he’s shaky like a fiddler on the roof. His opening monologue serves as mere exposition without a clear audience or purpose for Wahle. The ensemble bustles with energy and purpose in its classic opening of “Tradition”. The movement is crisp with some beautiful stage pictures as we are introduced to this town and culture. In fact, the ensemble is particularly strong in each of its numbers; we just don’t have enough of them. With sporadic ensemble numbers in a mostly star-driven show, the audience relies on Wahle and the other leading characters to carry us from one ensemble number to the next. Unfortunately, the leading characters miss something that threads the story together.

Donna Sorbello embodies Golde, Tevye’s wife, in her mannerisms, her voice, and her chemistry with her husband and daughters. Sorbello has a beautiful moment in “Sabbath Prayer,” easily an unlikely highlight in this production with its soaring vocals, deep conviction, and beautiful lighting (bravo, lighting designer David Wilson for your creative and incredibly effective work). I wasn’t particularly impressed with Sorbello and Wahle’s “Do You Love Me?” but I never quite bought their relationship either before or after that song, something that I’m willing to overlook because the dynamics of the relationship are quite foreign to our own culture. Unforgivable, however, was the mediocrity of Nora Fox as Tzeitel. While Tzeitel has never been a memorable role (in fact, I always joke that the daughter’s role in the musical is a mere plot device to propel the audience and Tevye towards more interesting struggles with Hodel and Chava), Fox’s performance is so lackluster that I questioned the integrity of Actor’s Equity. Equally annoying is Peter Mill’s Motel, the lovable Taylor and lover for Tzeitel. Mill does well in “Miracle of Miracles,” but his acting choices quickly grate and become a mere caricature. I recognize the need for humor in the show, but even musicals deserve some respect that they are stories with people wanting to tell their stories. When an actor’s questions transcend into mere stereotypical behavior, not only does the scene suffer from superficiality but the show suffers from mockery.

Luckily, Gillian Mariner Gordon as Hodel and Alexa Lebersfeld as Chava turn in powerful performances. I was lucky enough to see Gordon as Chava in Wellesley Player’s production of Fiddler on the Roof a few years, and Gordon is able to play each of the roles with ease. Her chemistry with Daniel Forest Sullivan’s Perchik, the revolutionary student, is powerful and visceral. While Sullivan never seems drastic enough in his beliefs or convictions to play a believable revolutionary, he is charming as a lover and Gordon falls in love with his intelligence, not his passion. Gordon’s “Far From the Home I Love” is, unsurprisingly, a highlight with her soaring rendition of the iconic song; I am sure she made every female singer jealous and every audience member tremble with her beautiful acting and singing talent. Lebersfeld is good and her scenes with Matt Phillipps’ Fyedka, a Russian soldier, are tender and sweet. I always feel like Chava and Fyedka’s story is incompletely told, Lebersfeld and Phillipps commit to their undeniable connection and they sell the audience on their Romeo-and-Juliet marriage. Unfortunately, I was unmoved in “Chavaleh,” one of my favorite moments in the musicals in other productions, and I wondered why, for once, I didn’t lose it amongst the company of the strangers in the audience.

And I realized it’s because I never believed Wahle’s convictions. He does a wonderful job during his monologues/soliloquys, but he misses the mark of a man who might break and I never feel like he has much to lose. In general, I felt the entire show suffered from a lack of urgency and raised stakes. Even eviction from the town (sorry for the spoiler!) lacks the heightened sense of confusion and loss. In fact, by late in the Second Act, the ensemble (along with most of the leading actors) seem to be simply going through the motions towards the inevitable ending. Maybe the show itself suffers from an absent antagonist, but I think it’s more than that. This production never tapped into the conviction of tradition. From the beginning, the actors abandon any trace of an accent, quickly drawing me out of the production (especially with Wahle’s crisp diction and radio voice). That said, their wedding scene is one of the more beautiful and polished I’ve seen. Despite a bottle dancer dropping his bottle (note: I am sure there is a bigger fuss if one of the bottle dancers drops his bottle in an actual wedding and the ensemble should be prepared to react appropriately), the ensemble is incredibly invested in this cultural experience and each member is in the moment as traditions are changed before the audience’s eyes. It was the kind of visceral experience that the whole show should have been.

Which brings me to my biggest complaint: the director. Kirby Ward is an incredibly accomplished actor and director who lacks a clear vision or directorial touch for this production. In fact, many scenes felt thrown together and suffered from under-rehearsal. I still can’t understand what Ward wanted the audience to appreciate or understand in this production. I will begrudgingly admit that some theater should be simply enjoyed, but I would expect more from such an accomplished artist and impressive company. I enjoyed myself immensely, but I am unsure if I am riding my deep admiration for the show or if the supporting cast and ensemble’s performances were strong enough to carry me through some mediocre leading performances and lack of directorial commitment. For example, while the wedding scene was strong, the Russian’s entrance at the end of Act 1 wasn’t strong enough to elicit much of a reaction even from the actors onstage. “To Life” lacked the dizzying effect of tradition, celebration, and fun; “The Dream” suffered from a stagnant Fruma-Sarah (Shonna Cirone was fabulous in her delivery though!); and “Anatevka” was uninspired, listless, and pathetic in its complicity. Many of these faults I (perhaps unfairly) attribute to the director’s lack of shaping and vision.

With all of my biting critiques, Reagle Music Theatre’s Fiddler on the Roof is still a beautiful story with some highly enjoyable performances (supporting stars Beth Martin Pierce’s Yente, Rishi Basu’s Lazar Wolf, Allison Russell’s Grandma Tzeitel, and even James Forbes Sheenan’s Mendel deliver highly committed and powerful performances). Gordon and Sullivan, and Lebersfeld and Phillipps show some incredible chemistry and skill. I encourage readers to attend the show to make their own conclusions. Perhaps I come to the production with too much baggage from performing in it and seeing too many productions of Fiddler in recent years. The production runs only until July 21 at 2:00pm with the impressive and highly-anticipated Les Misérables running from August 8 to 17.