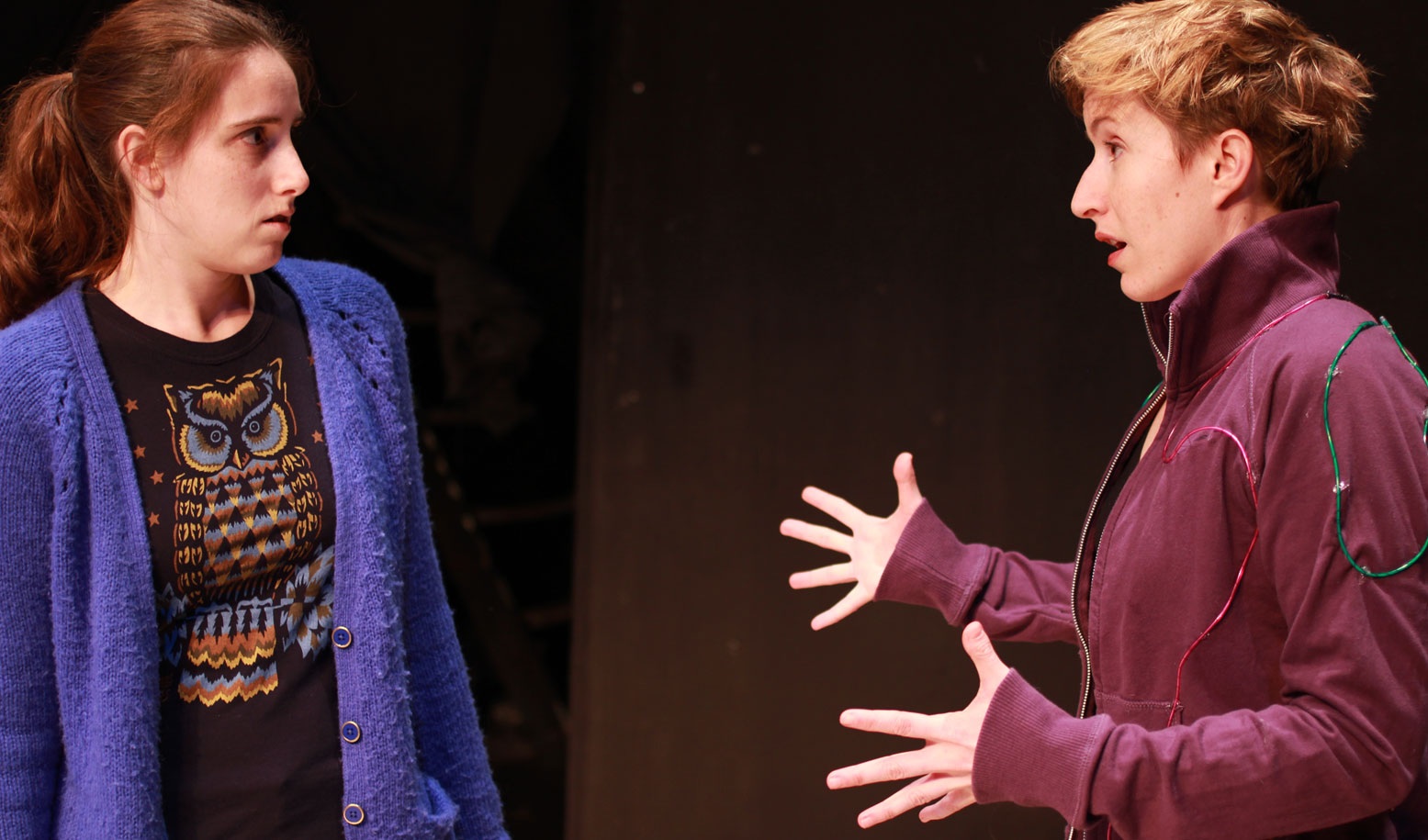 “You’re not special just because you got hit by lightning.”

“The internet thinks I am.”

It is much easier to review a show that is unequivocally bad or mind-blowingly amazing. It is the complicated show with so much potential but a final production that ultimately doesn’t work, that creates a conflict for me. I want to say that it was new and interesting, give it a thumbs up, and pat myself on the back for supporting small theater and new playwrights. Walt McGough’s exploration of the internet and our changing connectivity has a lot going for it. Internet blogger Brenna McClellan is struck by lightning while live-streaming a suicide note because she feels alone after her online boyfriend disappears. Her friend Gale, whose brother is the aforementioned missing boyfriend, begins printing the internet in an attempt to reclaim her family. These two characters hold up the quickly moving center of this story. Unfortunately, the side characters, while part of two separate storylines, come with the same problem:  both the internet surveillance officers and the anti-tech cult take the story into the land of slapstick instead of allowing the clever script to be itself.

The script captured the witty repartee – internet – Buffy speak my young online generation aspires to. It’s so rare that a show understands the social flow of the 20 somethings while utterly missing the mark on creating believable adult characters. The comedy of the show sparkled, and the sci-fi aspect worked in an enthusiastic suspension of disbelief way. I don’t have a problem with slapstick humor. Yes, I have a soft-spot for quick topical banter, but I really think over-the-top physical humor still has a useful place. In fact, I think it’s more difficult to pull off consistently without reaching for the laugh. Sadly, this is exactly what happened. The older characters, namely Officer Sykes (Monica Shea) and cult leader Sal (David Frank) were given huge bombastic personalities that overshadowed the supernatural setting they occupied.

Caroline Price as part human- part Google Brenna carried the dialogue skillfully and backed it up with physical comedy. Her rapid-fire delivery and bursts of energy fit the stakes for her character. However most of the cast either seemed stiff or over-the-top. If your role as “The Internet” is more believable than your role as a police officer, something has gone terribly wrong. It might be my personal inability to find the idea of police officers coming in to your home and violating your rights innately funny, but the recurring joke of “the girl doesn’t understand technology and must be mocked and lead by her cooler male counter-part” didn’t make it better.  Anthony Rios as Monroe kept these scenes funny – his demeanor was relaxed, and his effortless comedy didn’t so much balance the strain of his scene partners as highlight why it didn’t work.

It also might be Walt McGough’s script that was afraid to let the play have serious or tense moments with something at stake. This was most evident with the cult scenes. David Frank as Sal looked like a great actor chewing the scenery out of a lack of something better to do. His had moving inspirational lines that could not affect the audience because there was no story behind them. The big conflict between Gale and Sal gave us no reason to listen to his reasonable argument since the answer was literally happening on the other side of the stage. To point out that we are dependent on our technology is a useful observation. The idea of this plot could have been a fascinating investigation of this, but by never letting that argument have a serious moment, the entire conflict seems silly. Some of this is world building – major shifts in the status quo happen between acts 1 and 2. Without spoiling it, I’ll say you can’t have meaningful inspirational speeches if the audience has no reason to empathize with the character’s plight. We need to either care about the change itself, or the characters’ struggle through it. But here, two opposing inspirational speeches were the exposition dump telling us about the new world order. It came off as a clunky glob of telling and not showing. It all felt small despite reaching so far. I understand that you can’t give us a sweeping pan of [spoiler], but there are other ways to tell us the world has changed. Or maybe just the city has changed – it was unclear. The world building was thin and the sci-fi aspects couldn’t seem to decide what its own internal logic was. Characters developed unexplained powers that did not follow with their previous abilities (why does having the internet in your head give you telekinesis?) that I would have accepted with even a hand-wave explanation.

But, this is getting too negative. I liked what I saw. I thought the Tron-eqsue lighting effects were well-used, even perhaps underused. Caroline Price and Anthony Rios have natural comedic timing and charm, while Danielle Lucas’s performance exuded a heartfelt sincerity and vulnerability. Some of the jokes were so well placed, that the actors had to hold for our raucous laughter and clapping. The over-whelming feeling I had leaving the show was that it was hilarious, but had so much potential to be more than a quick laugh. I want to see more of Walt McGough, I want to see more of Boston Actors Theater, and I want to see more of this show.