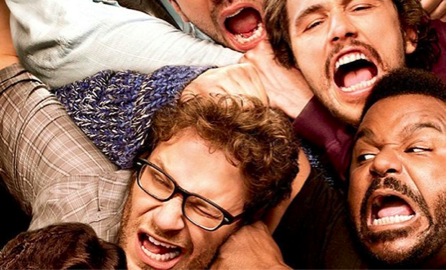 This Is The End

This Is The End is one of the most self-indulgent films of all time. People like to criticize Adam Sandler for essentially making movies that allow him to hang out with the people he likes in a beautiful location for the weekend. Well, This Is The End kind of double downs on that, allowing a group of slightly-over-30 year olds from the Apatow bootcamp to riff with each other for the course of a feature film, not even bothering to come up with characters. Instead Seth Rogen, Jay Baruchel, Danny McBride, Jonah Hill, Craig Robinson, and ESPECIALLY James Franco play somewhat shifted versions of themselves.

The difference, of course, between This Is The End and a movie like Grown Ups is that This Is The End is uproariously, non-stop funny. It sends up celebrity, religion, and self-centeredness while never over playing its satirical hand. It feels like nothing so much as Mel Brooks’ profane comedic offspring.

It’s hard to pick who comes out the funniest in this battle of the stoner-comic legends. Seth Rogen and Jay Baruchel have the most boring jobs, mostly playing straight men (or in Jay’s case, grumpy men). Jonah Hill’s the closest thing to a character. Danny McBride is… honestly just fantastic. Craig Robinson is a personal favorite, just because he always seems like such a damn teddy bear. But I have to give the nod to James Franco, who just seems like such a freaking weirdo and is more engaged in this goofy movie than he has been in ages.

The ending is a little cheap and easy, and loses a lot of the satire that made the beginning of the film so great (the film’s best, and subtlest, joke comes before we even know it’s happening – when the big apocalypse first begins, nobody at the Franco party is affected by it. It isn’t until much later that we realize why, and why that’s hilarious), but it does involve… well… to spoil that would be to spoil the whole damn thing but let’s just say that Kelly will be pleased.

In a weekend where one movie wildly disappointed me (wah, wah, whine, whine), This Is The End was the perfect palette cleanser, a film that delivers exactly what it promises with a surprisingly steady and occasionally insightful hand.