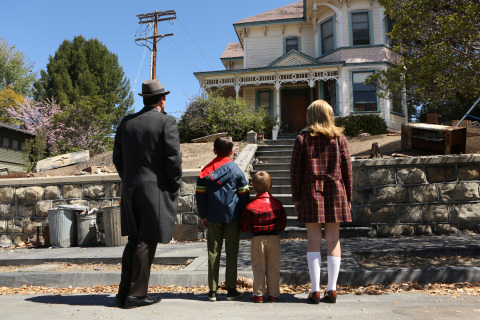 “Can you keep it down? I’m trying to drink.”

Although the idea is impossible, it feels as if Matt Weiner was afraid that Mad Men would get canceled after the end of this year, because this week’s season finale almost feels like a finale for the entire series. All the characters experience major changers, and embark on a new era in their lives.

The first dramatic change in the finale happens to Pete. He receives the heartbreaking news that his mother, who had left on a cruise for her nurse/possible love interest, has disappeared off the boat, and is presumed drowned. It gets even stranger, as it appears that his mother and her nurse Manolo were secretly married on the trip, and Pete becomes convinced that Manolo killed her. He goes to confront Bob, who recommend the nurse, and accuses him of being an accomplice. Bob denies any involvement, but Bob soon gets a chance to show his true colours, as now he sees Pete as a personal threat.

Bob sabotages Pete at a meeting with the Chevy executives, causing him to be removed from the account. Bob now has Chevy all to himself. Bob provide himself to be incredibly Draper-like this season. He was  mysterious to all, thought entirely of himself, and when he saw a potential threat to his own position or advancement, he immediately attacks and destroys it. Pete is not ruined though; on the contrary things start to look up for him at the end of episode. Pete decides to take an opportunity to move to LA and build up the West Coast presence of the firm. He has a last meeting with Trudy, who points out that Pete is now free. Free from his parents, free from his marriage, free from Don. The freedom that Pete has always desperately wanted finally seems within his grasp.

After a season of increasing tension, Ted and Peggy finally consummate their attraction. Ted confesses his plans to leave his wife, while Peggy seems to be reluctant to be ‘the other woman’. The next day, however, Ted and a change of heart, and pleads with Don for a possible position in California. Ted breaks things off with a furious Peggy, and heads to the West Coast to try and salvage his family. Peggy does not end the season as merely a spurned lover, and as a result of Don’s near breakdown (more on that later) instead she becomes the defacto Creative Director at Sterling Cooper & Partners. The final scene finds her in Don’s office, now hers, and frames her in way that exactly matches the dark silhouette of the Mad Men logo. After years of hard work and borderline abuse from Don, the student replaces the teacher. Peggy has finally reached the top.

It always comes back to Don. This season opened with him reading Dante’s Inferno, and his character trajectory certainly leads him to the lowest depths of despair that we have ever seen him experience. Over the course of the past twelve episodes, we have seen Don blow off work obligations, start a new emotionally damaging affair, alienate his co-workers, drive his second wife to the brink of divorce (again), repeatedly humiliate himself in public, neglect his children and ignore their safety, and destroy virtually every meaningful relationship in his life. And yet in one speech, Don managed to redeem himself, and for the first time he did it with the truth.

This episode finds Don in desperate need for change. At first he thought he wanted to be a married man again, when that failed to satisfy him, he returned to his classic philandering ways, only to find up being more desperate and alone than ever.  Stan comes to speak to Don about hiding up the campaign for Sunkist juice is Los Angeles. It’s a lower level assignment with a high chance of failure, but Stan sees it an opportunity. At that moment, Don realizes that this would be the opportunity he desperately needs as well. He can free himself of every terrible personal demon that New York City has come to exemplify, and rid himself of his past. A new start, for the man who’s had dozens of them. Don recommends himself for the California position, totally screwing over Stan in the process, and the partners seem ready to grant his request. Don rushes home to tell Megan, who is overjoyed at the proposed move. This well bea great chance for her career, and Don pledges his sincere desire to find happiness again.

Then it all falls apart. Don gets drunk at bar and punches out a huge jerk of ministers, before spending the night in jail dealing with flashbacks to his tormented childhood.  At work, he tries to turn over a leaf, even through the shaking symptoms of alcohol withdrawal, and walks into a meeting with Hershey’s Chocolate and gives the perfect pitch. But the perfect pitch is a lie, and now Don wants the truth. In front of his coworkers and the executives, Don tells of growing up an orphan in a brothel, where the occasional Hersey bar, bought with pickpocketed change, was the only thing sweet, good, and normal in his life. The room is stunned, the audience is stunned and Don has been redeemed.

A conversation with Betty, combined with Don’s new appetite for honesty, makes him realize that his children are on a dangerous path as a result of his neglectful parenting. Don finally smartens up and resolves to give his kids the proper childhood and guidance that he never received. Don relinquishes the position in California to a grateful Ted, but seems to lose Megan in the process. She is furious at him, as she quite her job and already has career prospects lined up in Los Angeles. She walks out on Don, and finally takes charge of her own life. At work the parents, in response to his soliloquy to Hershey, places Don on leave, which is a career embarrassment and means he is one step away from being fired.  Don seems to be left with nothing, but now he has the truth. He piles the kids into the car for a long drive. They pull up in front of dilapidated house in Pennsylvania, and Don gets his confused children to stand in front of the home. “This is where I grew up.” he tells them. At that moment, Don finally stops being a mystery to his children, and he and Sally share a look of reappraisal. Don doesn’t look sad, instead he looks resolved to start a new era of his life. For the first time in a long time, Don has the truth, and the truth has set him free.