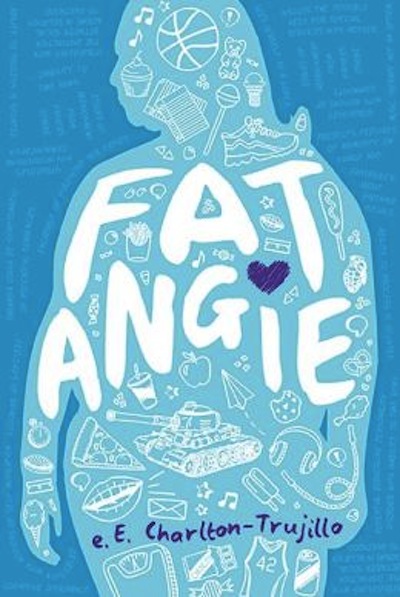 E.E. Charlton-Trujillo’s Fat Angie is a triumph and a mess and funny and brutally honest and gimmicky and clichéd and wonderful and a freaking thousand volts straight to the chest. It’s quite flawed and I could nitpick some of the style for years but.

This book could be a lifeboat.

I mean. I use nautical imagery a lot (I like boats, okay?) and I sort of think that a lot (not all, but a huge number) of books—especially YA fiction—could be lifeboats for specific people. And this book is definitely one of those. I imagine some kid finding it just when they need it–finding just what they need in it. I imagine them reading it, taking some of the words, some of Angie and using it as a touchstone–a chant to bring them back, to keep them safe, to ward off evil.

Yes. I do have a very active imagination.

I don’t think that makes me wrong.

Fat Angie is a heck of a lot of book. Sometimes Lifetime amounts. Sometimes too much to be within the bounds of good taste.

I mean, I do care (some). Style is awesome, and some of my objections had less to do with style and more to do with hammy gimmicks getting in the way of the meat of the story and a fuller/more realistic investigation of the characters’ problems.

But (but but but) at the same time, this book packed an emotional wallop like very few others. I made the mistake of reading it on a train–and like, almost all of it in one go–and. Whoa. (Full stop). There were parts where I had to do sort of adapted Lamaze breathing to keep it together (I know that right now I’m coming across as at least mildly overdramatic/nutbar with the intensity, but trust that even for me that is new and different and a lot).

Onward! To the plot! The book is about Angie, a girl living in Dryfalls, Ohio, whose former basketball star hero big sister is MIA in Iraq, whose adopted brother, Wang, has recently become a total jerk face to her in public, and who is the only girl in school to have ever suffered a highly public mental breakdown. The norm of Angie’s school day includes near-Carrie level bullying (but, Angie is mostly sad to report, no telekinesis), and being called “Fat Angie.”

But this is a teen book about high school. Naturally, the status quo is about to get a serious shake-up.

In this case, said shake-up comes in the form of a punk-rock, Buffy The Vampire Slayer-loving new girl by the name of KC Romance (Yup. That’s actually her name. …Yup), and the swoony looks-across-a-crowded-room stomach-butterflies she induces in Angie.

Fat Angie is not your average Sarah Dessen virginal-white-teen-girl-meets-mysterious/broody/quirky/etc-white-teen-guy-they-muddle-through-flimsy-trust-issues-and-fall-in-love book. I mean, it’s still mostly white people (minus Wang), but there are a ton of interesting, alarming, real-life issues happening here.

Here is your Danger Will Robinson! Alarm: This book deals with mental health issues, repercussions of war, self harm, attempted suicide, death, bullying, and bingeing (despite all that, I promise it’s not actually all doom and gloom. It’s not exactly funny, but it’s sweet, and sometimes giddy-making). On a trigger-less front, yes, the book does feature a lesbian romance.

I don’t think that should be a big deal.

I know plenty of people (parents especially) who would disagree with me.

I think that part of the story is quite well and lovingly handled, actually (I mean, it’s not perfect, KC herself is a bit of a mess for me), but the book treats the lesbian romance like any other teen romance. It alternates between swoony headfirst enthusiasm and halting, awkward I-like-you-but-I-don’t-know-if-I-like-like-you (and even if I do like-like you what do I want to do about it?/what does it mean?/ohmygawd it’s the end of the world!), etc. Which, frankly, is pretty normal. And important.

I also think that it’s important that Angie (and KC, and Wang, and Jake, and even mean girl Stacy Ann) get to have more than one thing going on. They are not Issue People. Angie is not just The Victim of Bullying. KC is not just The Lesbian. Wang is not just The Asian. Jake is not just The Jock. And thank goodness. They get to be complicated people with a lot of varied interests, concerns, coping mechanisms, and problems. And their “types” don’t define their storylines (certainly not Angie’s).

So, did I mentally cut the book some slack for tackling less written about, under-represented issues and demographics? Yes. A bit. I really did genuinely like it, despite some of my nitpicking, and it did really truly play on my heartstrings like a guitar. So, yeah, I did grade Fat Angie on a curve, but not by much, is what I’m saying.

Go read Fat Angie. It’s a bit of rushed mess, KC’s dialogue is crazy “quirky” and forced, but by the time you’re in it, that stuff stops mattering. It sucks you in and spits you out and crushes your heart to pieces and it’s great.